Board games are fantastic at modeling complex situations. I suspect that just as music is the art of sound, film is the art of directing, and literature is the art of fantasy authors using italics to tell me when their characters are delivering moody internal monologues, board games are the art of reducing models to their most digestible format.

Volko Ruhnke is no stranger to setting cardboard and counters to this purpose. Best known for the COIN Series, which depicts asymmetrical insurgencies, revolutions, and ideological contests throughout history, Ruhnke has now delivered a second system. This one is called Levy & Campaign, its first volume is Nevsky, and it’s an exemplar of how to deploy incentives and constraints to teach us something about history.

Maps that seem hand-drawn are my favorites.

The Order of Brothers of the German House of Saint Mary in Jerusalem — less cheek-achingly known as the Teutonic Knights — were a sibling order to the more famous Templars and Hospitallers of crusading infamy. This uniquely German order never matched the influence of its peers in the Crusader States. Instead, its reach gradually drifted homeward, first granted lands in Transylvania by the King of Hungary and later crusading against Prussian pagans with permission from Holy Roman Emperor Frederick II and a trio of successive Popes. By the thirteenth century, their appetite turned eastward toward the enticing morsel of Novgorod, a wealthy republic recently weakened by incursions of Swedes and Mongols. Although its Rus’ inhabitants were largely Christian, the great schism between the Latin Church and Eastern Orthodoxy was still smarting after less than two centuries. Bringing the city-state back into communion would be a significant victory for the Latins — not to mention enormously profitable for the crusaders. Pretext in hand, the Teutonic Knights began their march for Novgorod.

The resulting campaign became the stuff of legend. Mired by harsh Russian winters and the muddy downpour of the following rasputitsa seasons, the Knights were eventually drawn into an open confrontation by the brothers Alexander and Andrei Nevsky and soundly beaten at the much-mythologized Battle on the Ice.

Newcomers to medieval history are often startled by what they discover. Far from being “dark,” the Middle Ages were periods of growth, innovation, and curiosity, especially as Europe came to the attention of greater powers to the east. At the same time, much of Europe was connected by dirt trackways and the winding of natural rivers. Certain behaviors strike us as counterintuitive. Why might a lord spend the winter campaigning, only to waste the spring bottled up in a castle? Why spend so much effort raiding the very same land one hoped to annex? Later, why might that same lord stick around until the eve of battle, then suddenly strike camp and head for home?

These are the sorts of questions Nevsky excels at answering.

Here’s an example. You can probably guess why medieval lords preferred not to campaign during winter. Because it’s cold, right? Right. Simple. But why don’t they like to campaign in early spring? That one requires some explanation.

Nevsky divides travel into three broad categories. There are dirt trackways, waterways, and the open sea. If you’re a Teutonic lord planning a military campaign into Rus’ territory, all three of these categories matter. The open sea can be navigated rapidly, letting you bring major forces to bear behind the forts that defend the border. However, during winter months the sea will ice over. That means your ships are only useful in summer and spring.

Except leaving an army in the middle of enemy territory during those long winter months is probably a bad idea. Trackways and waterways it shall be, then. Except these don’t stay consistently usable throughout the year. In summertime, carts and boats are used to travel along those trackways and waterways respectively. In winter, both freeze solid. This won’t strand your army; with some ingenuity, they can repurpose carts into sleds, letting you travel far and wide despite the shorter days and biting cold. Counter to expectations, winter makes travel downright simple.

Simple is not the same as easy. Even though your sleds are zipping all over the place, your armies can no longer forage from the countryside. Your best bet is to raid cattle. Cattle can be eaten, or even better gifted to your lords, mercenaries at heart, to entice them to remain in service a few weeks longer. The only problem is that cattle aren’t so easy to herd. They’ll slow down your troops. And unless you’re in friendly territory, what helmet-dented lordling would want a thousand cows as payment? A cow can’t exactly fly back to my estate, now can it?

Oh, and then there’s the rasputitsa, the rainy season that dogs winter’s heels. Suddenly boats and ships are all the rage again. Trackways, on the other hand, have gone over to the mud. Totally untraversable. Some towns are unreachable. Major hubs can only be reached from certain directions. And that lord you sent forging ahead in later winter? Now he’s wasting his time squatting in a castle. Since his term of service ends soon, he won’t be of much use beyond that.

Lords and levies will only pledge their support for limited durations.

As you may have gathered, Nevsky parcels out both carrots and sticks with a quartermaster’s eye for exactitude. Its carrots are formidable; its sticks, biting. As in many medieval conflicts, raiding is often more profitable than actual conquest, especially once an army weasels its way around behind its rivals. Sieges are long and grueling, forcing major expenditures of provender and time, and often leave behind a lot of dead attackers and a garrison that’s blowing raspberries down on their corpses. Soldiers are fickle and prone to flight. Loot paints a target on a small army’s backside.

Perhaps worst of all, the lords who marshal your armies are as greedy as they come. True, their bonds of fealty and obligation demand some measure of service. These are painstakingly accounted for on the game’s calendar. Meanwhile, the card system that regulates strategic commands — not to be mistaken for the card system that regulates events and capabilities — forces the conflict between obligation and mercenary interest into sharp contrast. Every turn, you program a sequence of cards to represent your plans for a forty-day campaign. Back and forth, the Teutons and Rus’ reveal their intentions. Sometimes, this means a lord will march boldly into enemy territory and lay siege to a city. As often as not, the collapse of former ambitions, the movement of an enemy force, or a slight miscalculation in how much provender your three boats could carry will send you scrambling to recover. It isn’t uncommon for a lord to pledge himself to a term of service, then do very little until his tenure is up. Others will ransack and battle and accept countless payments to remain afield. Just as Nevsky asks you to navigate its physical spaces via changeable routes and insufficient transport, it asks you to navigate the social codes that were predominant in its day. Both are governed by simple arithmetic; neither seems to ever sum in your favor.

These frustrations are appropriate to the setting, resulting in campaigns that are half forethought and half panicked contingency. More than once, it’s been noted that the cat and mouse between medieval armies sometimes looks like two forces fumbling backwards until one of them somehow beats the other through a stroke of brilliance or luck or maybe weather. That description fits Nevsky to a tittle.

But what about the play? Is it compelling? Is this box of stuff, this model, for lack of a word that isn’t altogether meaningless, any fun? 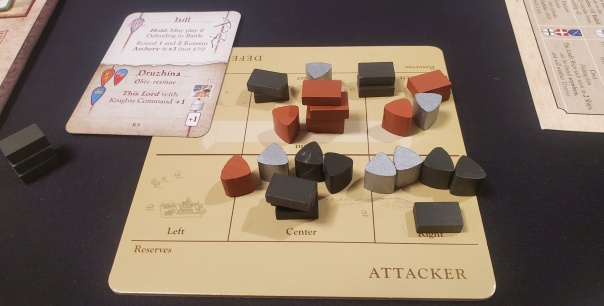 One of the great strengths of Ruhnke’s COIN Series is that on the whole its volumes succeed at being both playable and insightful. This isn’t to say the seams didn’t show. At times, it was possible to observe the concessions of historicity that made them playthings instead of spreadsheets. And thank goodness. I have no interest in writing about spreadsheets.

Nevsky’s seams are finer. Part of that is due to the immediacy of the topic. Clashing knights and fickle lords tend to draw the eye in a way that valences of governmental support do not. Where COIN required that every region act as its own separate light switch — sometimes even multiple switches in parallel, often with various dimness settings — Nevsky is content to pull much of its detail off the board. But those details are knotty. They have a way of getting tangled up. At times, they’re distracting. Were medieval lords unaware of the advantages of accountants and quartermasters? Isn’t there some bespectacled nerd with an abacus somewhere, his brow furrowed beneath his preposterous floofy hat as he calculates how many sleds I’ll need come winter?

On first play, Nevsky was something to be wrestled with. The same was true of the second play, and the third. Somewhere along the way, however, I surrendered. I stopped fidgeting over every miscounted cart, muttering at every stranded lord. Rather than being a system that should be gamed, it became a game that should be experienced in all its errors, a tale, an expression of how medieval warfare was fought on meticulous planning. Meticulous planning, plus a whole lot of backpedaling and innovation and sheer willpower when the planning fell through.

In the year 1240, the Teutonic Knights marched toward Novgorod. Their crusade lasted two years and ended in catastrophe, letting the Rus’ turn their attention back toward the Golden Horde in the east. To the Order, this was a hiccup. To the Rus’, it became a foundational myth. Volko Ruhnke’s Nevsky gets it. The pettiness and grandness of the conflict. Its orderly battle lines and messy routs. Bring on the next volume.

Posted on June 20, 2022, in Board Game and tagged Board Games, GMT Games, Nevsky, Volko Ruhnke. Bookmark the permalink. 6 Comments.