← Croissant Moon
I Have Three Sisters →

It’s madness that Wonderland’s War works as well as it does. Codesigned by Tim Eisner, Ben Eisner, and Ian Moss, the description is a mishmash of play verbs and unnecessary plastic minis. An area-control bag-building press-your-luck rondel-drafting wagering game? Leave the sequence adjectives to the professionals, honey.

The avalanche works in part because of the game’s setting. Lewis Carroll’s madhouse world is as zany and starkly drawn as ever, and only made slightly more madcap by the world war currently scouring its environs. The other part is more to the credit of its design team: it’s rare to be treated to a game quite this funny.

What’s Wonderland without a tea party?

On the dissection table, Wonderland’s War is a game of two halves. In the first part, players attend a (mad) tea party. This is the drafting and rondel portion. One by one, you take turns moving around the table to claim cards, along with their chips, upgrades, supporters, special warriors, and shards. The latter are the game’s sole tracked resource, a measure of your gradual insanity that will, if you’re holding the most of them come the party’s conclusion, toss an extra madness chip into your bag. More on that in a moment.

For now, the crucial detail is how rewarding the whole thing feels. It’s less a tea party and more a gluttonous feast of acquisition. You’ll only pick up four cards per round, but those four cards likely represent a half-dozen chips, upwards of ten supporters spread across Wonderland’s five battlefields, and a few special effects for good measure, not to mention the possibility of employing your character’s particular talents. There’s the Red Queen, capable of spreading her supporters far and wide, the Jabberwock with its terrible poison tokens, and Alice, poor ordinary Alice, who gets to traverse the rondel counter-clockwise, a funhouse reflection that affords her the best picks early on but soon sees her venturing into depleted territory. If it weren’t for the game’s absolute wealth of icons, the whole enterprise would be blissfully unencumbered. There aren’t any snaggy little rules to catch your elbow on; your character can travel as far as they like, only stopping at the head of the table to refresh any empty spaces and roll for more shards. At the same time, there’s just enough strategy, or at least synergy, to prevent your brain from idling. You’re building an army, after all, and that’s before you pause to consider which troops your rivals might be marshaling. 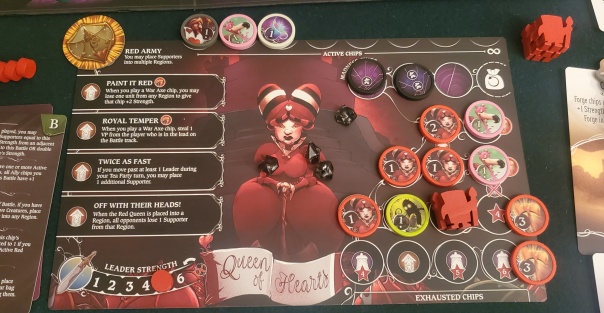 Each of the game’s five characters has their own personality.

As gratifying as the tea party can be, the battles are the real standout. They resemble nothing so much as an oppositional version of The Quacks of Quedlinburg. One by one, contestants reach into their bag to draw chips that both add strength and trigger special abilities. The rub is that you’re also holding all those madness chips. These kill off your supporters, threatening to “bust” your bid in the region currently being contested. It’s like drawing knives from a sack and not knowing whether you’ll come up gripping the handle or the blade.

There’s a lot going on here. Some press-your-luck. Brinkmanship that’s better described as a game of chicken on a railroad track of your own devising. Even some gambling — noncombatants wager on which side they think will emerge victorious, which grants extra chips and shames losers with shards. There are also special abilities. Maybe too many special abilities. I don’t think I’ve played a session without someone forgetting something that might have tipped a fight in their favor. In our most recent play, we rewound slightly to trigger the omitted ability and swap one victor for another, only to realize on the very next turn that another ability had also been forgotten, one that might have swung the battle back into the stripped winner’s favor.

Whether the better response is a yelp of frustration or a mirthful shrug is a matter of attitude. That said, nearly every detail in Wonderland’s War presses for players to adopt the latter. The aesthetic, sure. The whimsical nature of the fights. The randomness of it all. But also something deeper. Look closely and you’ll see a game that’s viciously competitive. Everything is a fight. But nothing is directly competitive in the way that, say, Kemet or Blood Rage or Inis tend to be. There’s no initiatory moment, for one thing, no instant where you say, “Hey, Adam, I’m going to fight you.” It’s everyone against everyone. And in many cases, you aren’t even in a space to win. You might have leftover supporters from last round’s battle. You might be chasing a quest, and these include plenty of tasks like “Finish a battle in Witzend after only playing three chips.” In some cases, the battle strength track uses forge icons to tempt you to reveal an empty fist on the next draw. Forging is the game’s upgrade system and method for winnowing your bag at the same time, and the rewards are considerable. Whatever the reason, it isn’t uncommon to throw a fight. Or to make a strategic concession. Whichever sounds better to you.

Add these points together and you get a game that’s competitive without really feeling like it. Instead, all that violence gets out of its own way, which lets Wonderland’s War get down to the business of being funny.

It’s hard to make a funny game. We aren’t talking about making a vaguely amusing game. We’re talking a game that gets the table laughing even when somebody is getting absolutely trounced. Wonderland’s War joins the likes of Space Alert in being one of those rare creatures that’s at its best when you’re falling on your face. Sure, there are the occasional moves that inflict a direct injury, whether by removing an opposing supporter, tossing a poison token into someone’s bag, or handing over an extra shard. Personally, these strike me as a misstep, nasty gouges in a game that usually cushions its blows. For the most part, though, your worst enemy is your own darn self. When your army is eradicated, it isn’t because a rival reserved an especially ruinous card to spite you. It’s because your very own fingers plucked your very own token from your very own bag. A token, by the way, that you drafted with your very own brain and your very own terrible approximation of unit synergy. Compared to that, the danger posed by your opponents is downright minor.

Notably, this highlights how much of modern game design is about engineering a desired social experience. On a mechanical level, bag-building is functionally identical to deck-building. But when we talk about how players think about their own agency, there’s a tremendous difference between drawing the top card of a deck you recently shuffled and pulling a chit from a bag that’s in a constant state of rearrangement. There’s no feeling of agency when drawing a card. All you did was pick something up. And only one thing — it might as well have been deterministic. Drawing from a bag evokes a different sensation. We feel around. We pretend we can tell the difference. We imagine the stuff at the bottom has been neglected, so we clink it around a bit. When we draw, the bag affords us no more agency than the deck. But our insensate brain imagines that it does. Then, when we draw the chit that obliterates our army in Tulgey Wood, we accept that we screwed ourselves rather than being screwed by chance. Hoisted by our own petard, we laugh. Recalling that “petard” means “bomb” and not “pants,” the way we always assumed because that’s how the phrase actually sounds, we laugh even harder.

That’s what Wonderland’s War does best. Almost every detail thunders toward that emotion. The comedic failure. The broken leader. The trip at the finish line. The laugh.

The deluxe chips are quite the thing.

This isn’t to say Wonderland’s War doesn’t occasionally trip over its third foot. In this case, the offending appendage is the game’s sheer mass. It’s huge. The board could have been half the size. The player mats could have been trimmed down. Don’t get me started on the deluxe edition’s mess of unnecessary miniatures, gray plastic homunculi that reproduce none of the standees’ vibrancy. I’ve set up and broken down approximately a billion games, and I still find myself wishing I had an assistant whose sole job was to put this thing together before a session and take it down once I’m done. It’s that much of a nuisance.

And yet, and yet, what a game. Its art, its chips, its playfulness with its creatures and supporters and character powers, the way it leverages the illusion of agency to heighten its comedic effect — all perfect. Even the overabundance of perks makes sense not only as an expression of crowdfunded zeal run amok, but also as a reflection of how the Wonderlandian soil tends to give way at the most inappropriate moments. All right, that’s me playing apologist. Still. Every so often a game understands the mood it wants to strike and the necessary steps to strike it. Wonderland’s War is that game. And it’s hilarious.

Posted on May 9, 2022, in Board Game and tagged Board Games, Druid City Games, The Fruits of Kickstarter, Wonderland's War. Bookmark the permalink. 8 Comments.

← Croissant Moon
I Have Three Sisters →