In fact, at first glance Inis doesn’t seem like your usual dudes-on-a-map affair at all. It’s got dudes, sure. And a map. And the dudes are on the map. But when it comes right down to it, this is a game about king-making that features a whole lot of actual king-making. And in this rare case, that’s a great thing. 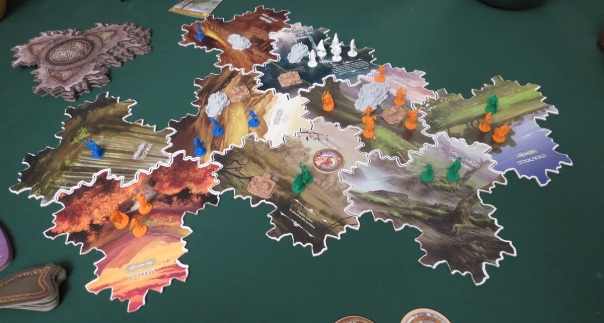 Expanding across the isle.

Let me clarify. When we talk about king-making in board games, we usually mean that a third party, most often whichever poor sod is stuck in last place, is responsible for determining the victor of a game. Two other players will be neck and neck for the win, so everything you’ve been building up for the last couple hours, all that drama and scheming and luck, comes down to which player can persuade the loser not to attack them. Not fun.

In Inis, this is sort of the case, though only in the sense that a game of Inis features a whole lot of politicking. This is going to be unfamiliar for anyone who’s coming straight from Cyclades or Kemet, throwbacks to an older time when men were men and board game battles were board game battles. When it comes to a fight in Inis, a whole bunch of them never even happen. You walk an army into an enemy-occupied meadow, ask for peace, and they’re as likely to grin and welcome you to join them around the cookfire as they are to engage in bitter combat.

Most of this stems from Inis’s unique take on victory. Each player commands their own clan of Irish settlers, having sailed across the green-dyed sea to claim this unexplored isle. As has been the case with virgin isles since the tender youth of history, your goal is to position yourself as the place’s high chieftain. But as is also the case with history, there’s no such thing as victory points. What is a “victory point” supposed to be anyway? Instead, you need to fulfill particular objectives, each of them positioning your clan as the best suited to rule over everyone else. There are three of these to pursue, each of them highly visible and defiantly tricky to maneuver into. Even with the possibility of picking up “deeds,” which act as wild cards when it comes to objectives, fulfilling just one can be a genuine pain in the butt, let alone fulfilling two when you catch sight of someone trying to tie things up with you. 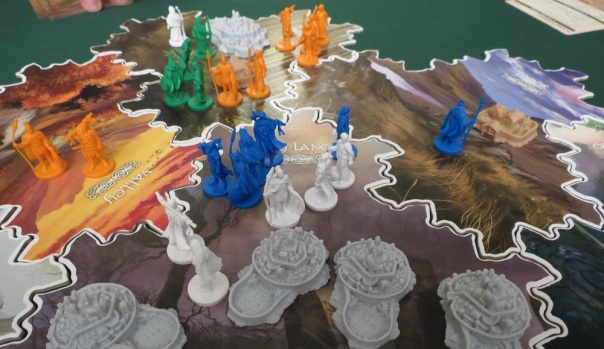 Somebody went overboard with the citadels.

This is already cool stuff, but it only gets better when you realize just how political each objective is. The first one, which requires you to occupy six territories — regardless of whether you control them or not — sounds like the easiest, but your limited number of dudes makes it hard to withstand anybody’s concerted effort to uproot you. Clashes between clans begin by letting defenders withdraw into local citadels like mangy cowards, bowing out of the ensuing fight in the process, and this can let a player retain a toehold in a contested region. But citadels aren’t always available, might be occupied by other players before you get a chance to squirrel yourself away, and at any rate Inis’s card-driven systems provide all sorts of ways to circumvent a bolthole. But more on those cards in a minute.

So instead of spreading out, maybe you opt to stay at home. By occupying six sanctuaries — which can be stacked across a small handful of territories — you might also win. Unfortunately, sanctuaries trickle out onto the board at the whim of the cards, and tend to create hotbeds of conflict once two or three of them accumulate in a single spot. Or, lastly, you can try to be chieftain over six opposing dudes. This alone gives you reason to let small numbers of opponents migrate into your territories, though their presence invites potential conflict down the road. And once it becomes apparent that you can win, all an opposing clan has to do is march out from under your thumb.

Then again, the beauty of Inis is that the simple act of marching away isn’t always possible. One of the reasons the game’s rulebook is so thin comes down to the fact that everything important is entrusted to the cards themselves. Like the auctions of Cyclades or the pyramid upgrades of Kemet, these are the beating heart of the game. While most activity takes place during the season phase, which is when everybody moves around, recruits new dudes, clashes and jockeys for territory, it’s the round-opening assembly where you’ll draft your upcoming cards, appoint the new brenn — a temporary chieftain who breaks ties, including in his favor — and begin the political inveigling that dominates every facet of life in Inis. When somebody needs more troops, for instance, it’s entirely appropriate to work to deny them any reinforcement cards.

And what cards they are! Even the regular action cards are both beautiful and beneficial, and everything gets its chance to shine at some point. For example, there are four of these for moving guys around, and each operates in their own way. In the early stages of the game, something like Emissaries doesn’t seem as flashy as Conquest or Migration, but once everybody has bunkered up in their respective territories, slipping a single warband into an opposing region under the flag of truce might be the perfect way to gain a toehold. Even better if you’re holding New Alliance to transform one of their guys onto your side, then Warlord to start a fight now that you aren’t outnumbered.

And those are just the basic action cards. Controlling a territory during the assembly will also give you control of that spot’s advantage card, which provide all sorts of additional options to consider. When someone controls a fertile valley, expect them to easily replenish their numbers. The guy with the iron mine is probably going to kick the stuffing out of you in a fight. Owning the swamp is pathetic as it sounds, until you need to watch your opponents from a distance but don’t want to risk passing. Everything has its utility.

The real game-changers are the epic tale cards, which are also the most difficult to lay hands on. Deploy the hero Cú Chulainn to kill off an entire army on his own, have the Morrigan twist the turn order and trick someone else into invading an opponent, or ride from one end of the world to the other upon Manannan’s Horses. There are loads of these to pick up, and fomenting a rivalry against anybody with some of these in their hand is always a testy proposition. Tapping the edge of your red-backed cards when someone mentions that they might move into your territory is a tremendous deterrent.

All these nice things aside, Inis really comes down to its political cajoling. Just as the theme of Cyclades and Kemet centered around the appeasement of the gods, whether through repeated offerings or the strength of the edifices you erected in their honor, Inis is about the white-hot immediacy of bickering with family members. It isn’t uncommon for tempers to flare at the slightest offense, but it’s ultimately about being the most pragmatic person at the table, allying and betraying and making kissy, over and over, until you crawl your way to the chieftain’s chair by tooth and claw. Where victory in most games makes you feel smart in some way, victory at Inis makes you feel like the slyest bastard at the table. Somebody got trampled on your way to the top of the heap.

That alone should determine whether Inis is right for you. I’ve seen a few people disparage it as dull. Which is unfortunate for them, because Inis is the sort of game where nearly all its drama is derived from the interactions between players. Dull interactions make for a dull time, simple as that. In actuality, there are always ways to get ahead, if only you’re clever enough to threaten with those red cards, leverage the greens and yellows, and lie while smiling and offering the hand of peace. Forgiveness is a luxury only the victor can afford, after all.

Posted on November 17, 2016, in Board Game and tagged Board Games, Inis, Matagot. Bookmark the permalink. 9 Comments.