One of my main complaints with modern Eurogames is that they too often mistake complication for depth. This isn’t surprising. It’s an easy mistake to make. After all, many deep games come across as complicated, with strategies and levels of mastery that may seem counterintuitive and elusive.

But complication can also prove distracting, especially when it’s wrapped within a serpentine vocabulary, iconography, or scoring conditions. In those situations, victory is often less about effectively manipulating the board state, and more about who’s superior at deciphering the game’s foreign tongue. In other words, it’s play as transliteration rather than strategy.

Trismegistus: The Ultimate Formula is both an example of how to do a modern Eurogame right — and horribly, utterly wrong.

Both the symbols and the colors of the dice are important.

I’d say we should start with the good stuff, but to be perfectly blunt, Trismegistus wants to do this the hard way. Right from the get-go, it flings terminology and iconography at you like an ape with too much poop and too little patience. Some of this is intentional; just as real-world alchemy was a mishmash of half-understood essences and tinctures (and even glyphs), so too is Trismegistus burdened by symbols that are a little too closely related, color coding that doesn’t always match, and even player aids that contradict the information printed on the board. When the game itself can’t be bothered to get it right, you can be darn sure it isn’t too worried about how your game night is proceeding.

In other words, this is easily one of the least functional user interfaces I’ve waded through. It’s like being a kindergartener and having to learn the differences between b, p, d, and q all over again. Except in this case, even the teacher succumbs to occasional dyslexia.

Maybe you don’t envision this will be a problem. Maybe you’re certain you’ll never mistake one symbol for another, especially during a crucial transmutation. Surely you’ll check and double-check. It’s possible your eyes won’t glaze over when the rules inform you that mercury is both an essence and a material, without having yet explained what essences or materials are for. Maybe you’re the one human who won’t chuckle at the potency track being called a potency track even though it looks like an engorged phallus.

Maybe. You’re wrong, but okay. I’ll run with it. On to the good stuff, then.

When Trismegistus works, it’s almost magical. The broad idea is that you’ll take a die from the center of the table, place it on your potency track, and then spend its potency to gather materials and essences, utilize artifacts, and transmute raw materials into purer materials.

Since I’d be a hypocrite to toss all those words at you without explaining what this lexical broadside actually means, let’s dig into how it all works.

The linchpin here is transmutation, the process that purifies a material into its purer form. And I’m not talking about regular purity, where ore is refined into a solid ingot, but rather alchemical purity: lead becomes copper, copper becomes tin, all the way up to silver and gold. Your personal laboratory shows these materials as flasks, most of them separated between “raw” and “refined” states, with each container separated by colored arrows. Because your turn-by-turn goal is to acquire the right materials to fulfill experiment cards, this process is often both means and end, each step generating materials that can be further transmuted into ever-finer materials until they’re cashed in for points.

Because this is a modern Eurogame, there are a significant number of complications to consider. The first is your selected die. Each material travels along a single arrow as it’s purified, and the color of that arrow must match your selected die. Refining tin to mercury or mercury to iron requires a white die, but the same transmutation is impossible if you’re sitting on a black or red die. Unless you spend a chameleon token, anyway, but let’s stick to the basics.

Having the right material and the right die isn’t enough. You’re also required to spend an essence. The game legend informs me they’re called salt, sulfur, and aether. Not that anyone can be expected to call them that. Our group defaulted to “theta,” “triangle,” and “wagon wheel.” Mercury, meanwhile, can also be spent. Recall that it’s both a material and an essence. At last, everything starts to click into place. Thankfully, Trismegistus doesn’t force you to match a particular essence with a corresponding transmutation; any old essence will do. Instead, you’re hunting for specific essences because they move you along a corresponding mastery track, with various levels of mastery being necessary to complete specific experiments, and—

And I suspect you’re starting to see the problem. 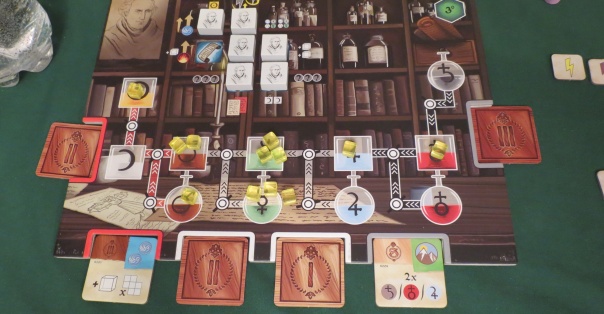 The real centerpiece of the game is your transmutation board.

I’ll start with the good one. See those square tiles attached to your board? Those are artifacts, and they’re a boon to alchemists of every stripe. Whenever a material travels along an arrow that passes an artifact, it gains some benefit. Extra resources, bumps on the mastery track, a handful of rare points prior to the final scoring spree — pretty much everything is up for grabs. The tradeoff is that artifacts are painfully expensive, especially given how restrictive the game’s actions are. Between gathering resources and essences, running transmutations, and recharging artifacts, your potency track will be quickly deflated. Still, even though they require the occasional recharging, these are often worth the investment, providing handy returns on all those cubes you’re pushing around.

The white blocks above your alchemical station are somewhat more troublesome. As you complete experiments — or create and spend gold — various “recipes” are unlocked and slotted into your personal philosopher’s stone. Both provide additional bonuses. And let me tell you, some of them are insane. Sort of like a real philosopher’s stone, I suppose. If I could turn lead into gold, the first thing I’d do is accidentally devalue the entire gold market. Take that, Goldfinger.

The thing is, this is a fantastic reward for accomplishing experiments. Perhaps too fantastic. Because both recipes and your philosopher’s stone provide rewards, it isn’t uncommon for early adopters to leap ahead of their competitors. Fair enough; to the victor go the spoils. But was it necessary for there to be quite so many spoils? Did Trismegistus need to award a recipe bonus and a philosopher’s stone bonus and mastery track bonuses? All in addition to the bonuses from artifacts? At what point does volume become volume for volume’s sake, rather than enhancing the intricacy of the game’s planning?

One of many things to pay attention to.

Perhaps the answer lies in the ability to “react” (get it?) to your fellow players’ actions. Whenever somebody takes an action, you’re allowed to spend one of your reactions to… well, not exactly react to that specific action. More accurately, you get to take a miniature action of your own using the color and symbol of their current die.

On the one hand, this lets you utilize dice you didn’t claim yourself. You’ll only draft nine dice over the course of a single game, so this extra bit of wiggle room is a good thing. The downside is that it does the opposite of what you might expect for player engagement. In many cases, playing simultaneously is a good thing. Everyone is kept involved at all times. But Trismegistus is complicated enough, and its board state only barely fluid enough, that every turn concludes with a pause as everyone assesses whether they need to piggyback on the die that was just used. And then, once those follow-up actions are finished, a second pause isn’t uncommon; this time, to recall whose turn it was and who should be playing now.

Put another way, one of the game’s few mercies is also one of its biggest hindrances to its pacing. But that’s Trismegistus in a nutshell. There’s a strong foundation here, a bedrock of dice drafting and careful transmutation and experiment fulfillment. It’s just that the structure built atop that foundation sports far too many functions. There’s a nice terrace for sharing coffee, but also a law office and a windmill, and over there you’ll find the entrance to a minaret, and the back end drops down to a marina.

The problem is even expressed by the game’s scoring. In prime modern Eurogame fashion, it isn’t sufficient for your experiments to be the main track toward victory. You’re also chasing scoring opportunities from hidden publication cards, racetrack-like mastery bonuses, the status of your philosopher’s stone, and leftover gold and potency pills. If anything, it takes some squinting to find something that won’t spool out a few extra points. Rather than zeroing in on what the game does best, it’s like blowing up a balloon animal from a bucket of loose rubbers some jerk tied into knots.

Wrapping up some alchemy & such.

Frankly, that core process deserved better. Gathering dice, and using those dice to accumulate materials and essences and then transmute them into better materials, all while firing off powerful artifacts along the way — that’s good stuff. A few of its parallel concepts might have even found a place in some streamlined form. In this incarnation, their combination is like deciphering the Monas Hieroglyphica via a math puzzle.

Then again, maybe it’s going for the thematic statement. Alchemy was complicated and tended to produce frustration rather than the desired effects. In that regard, Trismegistus nails it.

Posted on November 25, 2019, in Board Game and tagged Board Games, Board&Dice, Trismegistus: The Ultimate Formula. Bookmark the permalink. 9 Comments.