← Abstracts Get Political: Guerrilla Checkers
Satyagraha: The Board Game →

Alone in the Arena

You may have read Teddy Roosevelt’s “The Man in the Arena.” It’s a paragraph about how critics are quivering simpletons compared to the brave souls who actually produce or perform, which of course means it’s my favorite thing ever written. I have a cousin who posts it to my social media timeline at least twice a year. Not sure why. He’s a professional consultant. That’s a fancy way of saying he’s a critic who gets paid. Not sure why you’re beefing on me, cuz.

Anyway. That’s what I kept thinking about while playing Proving Grounds, a solo game about a literal woman in a literal arena. 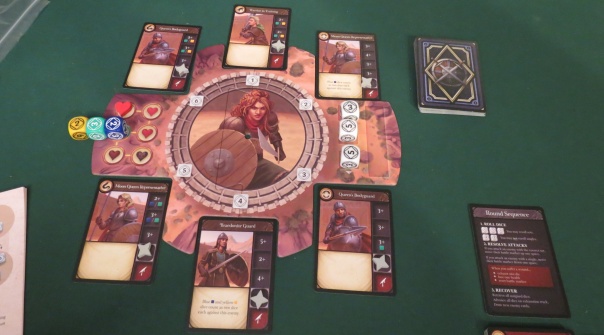 The woman in the arena.

Here’s the deal. Princess Whatsername has been framed for assassinating Queen Whonow, and consequently tossed into the Ring of Six Versus One, where she must slay her way to freedom. I think. There’s a storybook included with the game. An actual storybook for telling a story, not a storybook for posing as a flimsy merger of writing and scenario prompts. I made it to page three before I realized it was the wrong book and rummaged around for the rules. In other words, I didn’t finish the story. I don’t need to read thirty pages to establish the idea that “cool warrior now kicks ass.”

But the point stands. Proving Grounds takes your character — Maia Strongheart, a name that’s so on-the-nose that you might as well bash it with a shield — and throws her into the arena against six attackers, tosses a handful of dice your way, and sets a timer. That’s right, a timer. Officially, you can use the app from Renegade Game Studios. Better yet, set a timer for sixty seconds and you won’t be distracted by the app’s jeering crowds.

The reason you might not want to constantly check whether that ringing bell was time up or just the app bellowing at you for funsies is because you only have sixty seconds to get everything done. In practice that isn’t very long. First, you hit the button on the timer and roll your dice. Next you sort the results into their appropriate numbers, one through six, each digit corresponding to some jerk trying to skewer you without a fair trial. Third, you reroll, and reroll, and reroll to try to get the numbers you want — but every attempt is loaded, because you can only reroll dice if you’ve made a set of two or more. Rolled a bunch of singles? Too bad. Those are locked.

Landing zero dice on a fighter is fine. No dice? Just means you didn’t “engage” that fighter. Like the herky-jerky foes of the first Assassin’s Creed, they’re content to stand back and let somebody else deal with you. Meanwhile, multiple dice on a single fighter inflicts wounds. Some need 2+, others take 3+ or 4+, and some require specific colors before their guard will crumple. Landing a hit moves a tracker up along their battle track. Reach the top and you’ve scored another kill. Eight kills means victory. Now that’s a justice system I can get behind.

The problem is rolling only one die per enemy, the equivalent of showing them your back and wiggling your rump. Bestowed with one die at the end of the round, that foe’s tracker moves downward. At the bottom of their track they’ll inflict a wound. You’ll therefore want to get rid of singles pronto. But like I said, single dice are locked. Only sets of dice — those same precious sets you’re dealing wounds with — can be rerolled. Expect to sacrifice a lot of hits to roll to maybe avoid a wound or two.

And again, this is all on a timer. Information will be missed. A die will roll into the shadow of the box and go neglected. You’ll roll six hits against one fighter but also four singles elsewhere, forcing you to divest your opportunity to kill an enemy in one blow. Something will fall off the table. Too bad. The timer feels no sympathy for the accused.

Sorting dice. On a time limit.

That lack of sympathy is the first reason Proving Grounds offers such a stiff challenge. There are two additional reasons, one better than the other.

We’ll start with the bad one, which happens to be a technical issue. Rather than providing a balanced set of fighters, Renegade made the mistake of shipping a deck in which every enemy is only one step away from burying six inches of steel inside your rib cage. At a glance this might seem intentional. Fresh opponents make dangerous foes, after all. But it’s also overly punitive of early mistakes, offering little breathing room and cooling the challenge over successive turns rather than ramping up. It’s commendable that Renegade are willing to remedy the problem with a free replacement deck, but the solution falls short for anyone who might grab the game from store shelves. Not everybody is active on BoardGameGeek.

The final detail is both more positive and more interesting. The base game soon starts to lose its edge, which is where the game’s six advanced modules come into play. Half of these are fairly small, adding some variety without any significant rules overhead. There’s the dragon die, which behaves a little bit like a wild roll, dealing hits to matching enemies. Not that its inclusion is entirely rosy; you’ll have to pay attention to yet another set of symbols, and a particular outcome forces a reroll of all your colored dice — a potential catastrophe if it arrives at the wrong moment. Two extra decks, inspirations and conspirators, offer considerable buffs or hampering dings to your approach, and can be folded into any combination of modules.

The three chunkier modules make the game significantly harder. Chariots force you to invest in driving them off lest they trigger periodic downsides. This is my least favorite module, exhausting your dice regularly and pulling the challenge off of the board. The brain burner is the shields module. This downgrades a missed hit, which happens when you assign multiple dice to an enemy but still not the right combo to land a hit, into an opening for your opponent to raise their shield. Shield up, they’ll block multiples but become staggered by singles, functionally inverting the game’s central puzzle and forcing you to weaponize what was previously best avoided. Lastly, you can force Maia Strongheart to worry about which direction she’s facing. Every turn opens with you choosing which foe she’ll face, which also shows her back to somebody else. Stabbing your preferred foe awards extra colored dice, while ignoring the baddie behind you confers an automatic downward step on their battle track.

It goes without saying that mixing in some or all of these modules makes Proving Grounds more interesting. Whether it’s worth anybody’s time is the tougher question. 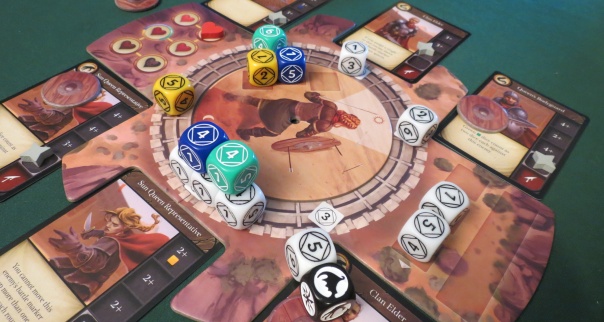 With shields, chariots, and facing added in, expect to die often.

My thoughts are divided here. On the one hand, its central puzzle forces you to parse the outcome of your rolls uncomfortably quickly, and that will probably tell you how you’ll feel about the whole thing. With a few modules mixed in, it’s a rare roll that doesn’t leave you scrambling to mitigate damage or take down a tough foe. At its best it’s a thinky and even a pleasurable process, especially when you manage to settle on an outcome you can live with: enemies blocked if not wounded, certain dice ensconced in their proper place, wounds avoided.

Still, Proving Grounds’ procession of near-identical combatants soon becomes tiring. Eventually they become numbing. It doesn’t help that the first turn feels the same as the fifth turn, which feels the same as the fifteenth. There’s no sense of pacing or escalation, other than that you’ve taken a few injuries and linger closer to death, or that you’ve killed such-number of foes and stand closer to victory. Perhaps if there had been something else to manage in between turns — fatigue, or growing threats, or single-use equipment for those close calls — then it might have broken up the monotony. Can it be called monotony when you’re lopping off heads? Proving Grounds shows that it can be.

A mixed outcome, then, and not one I’m likely to return to. As much as I love dice, time pressure, and warrior ladies kicking ass, Proving Grounds only slays seven of the eight necessary rivals in the ring — and in this arena, one too few still counts as defeat.

← Abstracts Get Political: Guerrilla Checkers
Satyagraha: The Board Game →