Specter Oops They Did It Again

Five minutes into Broken Covenant, Plaid Hat’s standalone follow-up to Specter Ops, and I was already in trouble. Let me tell you why.

Flushing out their prey.

Thirty minutes. Four servers. One little old me. That was the mission. Get in, strip three of the four terminals for incriminating data, get out.

But like all the best heists, there were some kinks in my plan. Two of them. Their names were Tracker and Watcher, and they were pros at this. They’d caught agents before. And while they didn’t know where I was, they’d begun to cobble together a pretty good idea of where I wasn’t.

Here’s the score. In Specter Ops — and it doesn’t matter whether we’re talking about the original or Broken Covenant, since they’re pretty much the same thing — one player is the agent, creeping around on a pad of paper rather than on the board. Everyone else is a hunter. It’s their job to spread across the facility, sniff out some clues, and then close in on the agent before they can perform their mission and slip away.

For this job, Tracker and Watcher had yet to catch sight of me, but they were doing beautifully at making sure they’d know the instant I poked my head above the grass. Part of that was thanks to their abilities. See, Tracker was accompanied by Rover, his trusty murderdog. Not only did I have Tracker’s eyes looking out for me, but also Rover’s nose. This was a mixed bag. The upside was that Rover couldn’t pinpoint my exact coordinates. Rather, he’d just bark, signalling that I was somewhere within his line of sight. But — and this is the bad part — Tracker could order Rover to sniff me out. Just like that, the duo could spread apart and determine which was closer to me. Perfect for flushing me out of an enclosed space.

And Watcher? He was almost worse. He had three cameras he could install around the base. Unlike hunters themselves, who can see in any direction, his cameras could only see one way… but that wasn’t going to help me when he had every major intersection locked down with cameras and the hunters’ car. I didn’t mention the car? Yeah, they’d elected to drive the vehicle with an optical alarm. Step into sight of it, and it would start up that irritating siren.

Well. If I couldn’t go unseen, I’d have to play dirty.

I managed to reach the first server before they caught sight of me, by the grace of the techno-god who will one day be born in the belly of the machine. The only problem was that stripping the server sounded the alarm. They knew where I was, even if only roughly. Within seconds, Tracker and Rover were beating the pavement, while Watcher’s chair whirred after me. Before I could escape the enclosed block of corridors and vents, they had the place surrounded.

Most of the time, an agent is required to place a “last seen” marker on the space the hunters saw her last. They still haven’t registered a positive ID, not yet. At that point, you’re still just a flicker of digital corruption in the corner of their viewscreen. But it often means they’re close enough to reach out and touch you. Or shoot you.

There are ways around this. Flashbangs will blind a hunter. Smoke grenades block all vision within a certain radius. Stealth fields are basically single-turn cheats that make you invisible. I had plenty of equipment in my satchel, but for now all I needed was my personal ability — because, as Panther, I could manipulate where the hunters had last seen me. Just by a single space. But within the cramped corridors of the server room, that was all I needed.

For the next dozen turns, the hunters were stymied. They’d catch a glimpse of me down one corridor, only to strike a pursuit and come up with nothing. I crossed two streets that way, leading them on a merry chase. At last they went east, certain that I was ahead of them. Instead, I’d doubled back — tripled back, quadrupled back, depending on how you’re counting — and one spent stealth field later, I’d bypassed a camera and the car’s optical alarm, and a second server’s encryption collapsed.

“Wait,” the Watcher said. Or Summer said it, since she was playing as the Watcher. “I think there’s an agent who can change where she was last seen.”

Dammit, Summer. That’s when the mission started going to hell.

The traitor system has been vastly improved in Broken Covenant.

Some of the changes in Broken Covenant favor the agent. There are caches of equipment you can plunder, rewarding you with additional knickknacks like flares, portable barriers, or medkits. And the once-perfunctory traitor mode, which only kicks in with five players and lets one of the hunters secretly be the inside man for the agent, has been rounded out with actual traitor abilities. More importantly, a traitor can now also hack terminals, making the moment of betrayal all the punchier. Both of these are welcome additions, giving agents new options and sub-objectives.

Unfortunately for me, there was no traitor to take the heat off my back. Now that they knew who I was, the jig was up. Every time their screens pinged the last seen alert, they knew I was close, but probably not as close as I wanted them to think. They spread out more, sent Rover panting into corners ahead of Tracker, and quickly boxed me in. I spent nearly ten turns in a single block, hopping back and forth and finally breaking my tail. But not for long.

There were only two servers left, and I opted to hack the one closer to the exit. My smoke daggers blinded Tracker long enough to slip in and hit download, and a portable barrier put some distance between me and Watcher. Then I was dry, both of equipment and tricks. My last hope was to beeline for the door and hope they missed enough of their shots for me to stagger, bleeding but alive, to freedom.

Watcher missed his first shot. And his second. Tracker wasn’t so unlucky. Nor, sadly, was Rover, who gleefully mauled me to death just a few steps short of the exit.

Panther should have known. The house always wins. 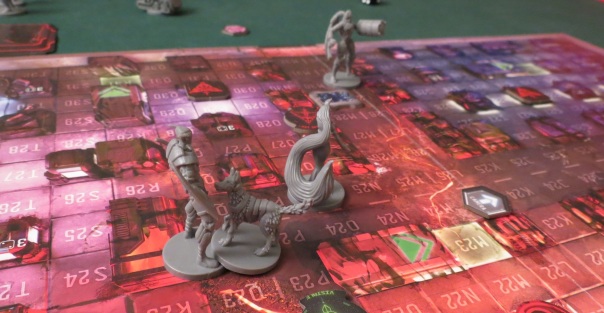 I went into Broken Covenant expecting more of the same. And for the most part, that’s what I got. This is still the same rather-good hidden movement game that Specter Ops was. It has a few unfortunate and shoddy coordinate errors on the board — How? It’s a grid — which may be a deal-breaker for some members of our hobby. But in addition to new characters, items, a slightly more dynamic map, and a super annoying car, it also boasts some definite improvements. Principally, playing with a traitor adds an entirely new dimension. There’s a pure joy to be found in setting up cameras that don’t detect your “prey,” only to transform into flashbang mines once you’ve turned coat. Awesome.

But yes, more of the same. Those who didn’t appreciate Specter Ops won’t be brought around. But for the rest of us? Broken Covenant molds one of the slickest hidden movement games into something even better.

(If what I’m doing at Space-Biff! is valuable to you in some way, please consider dropping by my Patreon campaign. Everyone who pledges at $10 or above will receive their own custom Specter Ops character ability, informally, upon request, and after I’ve had time to think about it.)