For some fool reason, Dan has decided to hand over the reins of the Space-Biff! carriage to his pal Brock Poulsen, for a feature they’re calling Building Character. Last time, Brock introduced us to his inaugural plays of Pathfinder with his son. But today, he’ll… well, Dan doesn’t actually know what Brock will be doing.

I tricked Dan into letting me do another one! For this month’s Building Character, I discuss the dark purposes I hide within my gaming sessions. Dark and mathy.

In addition to organizing a group of grown-ups, I quickly decided I would want to write and run my own adventures for my kids. My son — who as always I’ll call by his character name Myron — was struggling a bit in school with math, and I thought, what better way than a complicated tabletop game to help with that?

All that luscious math!

I came up with a few ideas of how to start his adventures, and told him my first rule: he would be responsible for all the math. Every time a die was rolled or hit points were smacked, he would be the one to total the numbers.

It also became a way to present my son (and his friends) with interesting challenges and see how they approached solving them. Pathfinder can be a complex system, but as with many tabletop RPGs, the advantage is the complete freedom it offers. I handled the character building and other complicated stuff, and did my best to present fun and interesting adventures.

In one recent example, I wanted to present a situation where the players would need to evaluate a situation rather than rushing in and hacking the bad guys to pieces.

While traveling in the forest, they heard the sound of drums. They passed skulls hanging from trees, and in the distance saw a spectre flit between two trees. Upon closer inspection, the skulls were actually crudely painted stones. The party traveled closer to the sound, and in a small clearing they saw a trio of goblins around a small fire. One was pounding furiously on a drum, while the other two were tugging on a rope system that sent the “spectre” flying through the air.

What I wanted to communicate was that the goblins were afraid of something, and trying to keep others away. Myron stepped into the clearing and asked the goblins what they were doing, and the lead goblin started shouting about the woods being “not safe” and about a “bad thing.” Goblins in my games occasionally speak at least a bit of Common, for the purpose of these precise types of situations.

The goblin leader revealed that the “bad thing” was something tall and green in the woods, and it had captured twenty of their tribe. The remaining goblins were scared to death, weaponless, and asked the party to help.

At first, Myron asked if the goblins could pay for the party’s services. When told the goblins had nothing, not even their weapons, his tone shifted completely. The party went through their inventories, handing over daggers and clubs to arm the remaining goblins in case of an attack.

Receiving directions, the party did a bit of tracking and were able to locate a small mud hut. The “bad thing” turned out to be a boggard prophet, quite a challenge for the level-3 heroes, but they prevailed. The boggard had a cage holding a dozen or so goblins (which the party broke open with the clever use of Ray of Frost), and Myron’s first comment was, “I thought there were twenty?”

They used a spell to freeze the lock on the cage to make the metal brittle and I was so proud.

I had forgotten that I’d said there were twenty goblins, and the cage wasn’t very big, so I asked them to roll to see what their characters knew about the creatures. “Goblins aren’t very smart,” I said. “When they said ‘twenty,’ what they meant was just ‘a lot.’”

The party urged the captured goblins to head back to their camp, but followed a ways behind to make sure they made it safely.

Myron, however, wasn’t going to let go of the numbers thing. “I thought you said there were twenty?” he asked the goblin leader.

Myron was still concerned. He looked at me seriously. “I want to teach the goblins to count.”

So that is how my brave heroes organized a math class for goblins. It was a success, and I assured them that the goblins now understood basic counting. 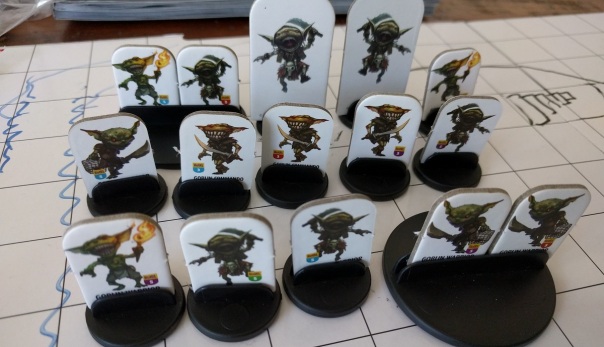 It was basically like a second-grade math class, I imagine.

It was such an odd and great decision, and exactly the kind of thing I love about this game. It wasn’t at all what I was expecting, but it was perfectly strange and honest; my own son has had trouble with math, and to see him reach out to someone else who was struggling was heartwarming.

And, to my great delight, Myron’s math scores have actually been getting better! I don’t 100% credit Pathfinder with the improvement, but I do think it was a factor.

They’re still kids in fantasy costumes, but altruistic stuff like this has been surprisingly common, and fills me with nerdy dad pride.