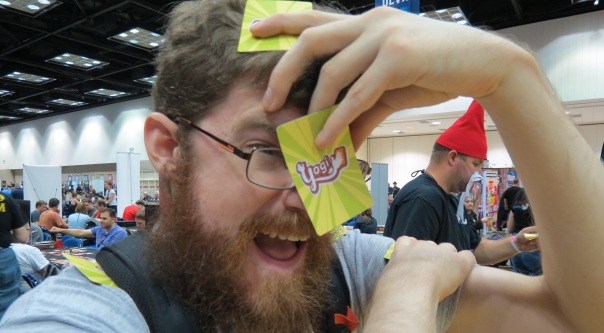 The third day of Gen Con was pretty much just full of secrets. I’d tell you about them, but, well, that sort of undermines the whole “secret” aspect. Further worsening matters, anything provided by publishers for review was probably something I didn’t actually play at the convention — that’s for later, you know — which makes this the least-worthwhile Gen Con report of all time.

So, hey, enjoy the few things I can write about!

They’re somethings of the Revolution, all right.

Witches of the Revolution

Witches of the Revolution doesn’t succeed at either. And I don’t say that lightly.

The concept is mad enough that it just might work. You’re arguing that the American Revolution only succeeded because a coven of witches had the fledgling Congress’s best interests at heart? Sure, I’m right there with you. Double, double, toil and trouble.

Well, this is a delight.

Well, this is an unexpected delight. Here’s what you get when you open the box: a mat, a sheet of stickers, and some tokens. There aren’t even a lot of the things, fewer than twenty. But the game itself is nothing but silliness. Get your score-bunny to the opposing goal before your rivals do the same to you. Simple, elegant, flicking, done.

And that’s pretty much it. We spent our evening with fellow critics Raf Cordero and Charlie Theel, and we all met up with Jim Felli to play his sorta-sequel to Bemused. That was awesome. But I can’t talk about it.

I suppose I could spill the beans on my Game of the Con. It was none other than:

But also The Expanse and John Company, and maybe one of the other two dozen games we brought home to play later. So I’ll get back to you in a year, maybe.

You were warned. Worst Gen Con recap of all time.

Posted on August 20, 2017, in Uncategorized. Bookmark the permalink. 1 Comment.