Only the finest individuals who have excess time on their hands, a means of transportation, sufficient acquaintances to attend in tandem to drive down the price of the hotel, and a peculiar love of board games go to Gen Con.

This is their story.

First stop, the forest. Admittedly, I set up this appointment because I assumed it would be one of those awesome games that are played with tea candles and employ actual light and shadow — and to my credit, we did use a phone light to explain how taller trees deprive their shorter neighbors of tasty sunlight. So I wasn’t all the way wrong.

In practice, Photosynthesis does not use shadows, nor any light other than that which the game must be viewed with. Instead, it’s about stockpiling sunlight by carefully positioning your trees to maximize their sun and throw shade at your rival conifers, then spending it to toss down seeds, grow taller, or eventually burn up in a blaze of glory that earns points based on how close to the center of the map you were. The trick is that the sun’s direction orbits the board with each passing round, completely altering the dynamics of which trees drink deeply of the rays while others languish in the dark.

We weren’t able to play the full three sun cycles that the actual game demands, but over the course of two cycles we each managed to grow a pair of trees to their full height. There seems to be a pleasant tempo to it, especially when it comes to deciding when to stand tall for sunlight or when to burn down for points. It’s also deliciously mean, letting you hem in your opponents with little copses of doom. Which is why we renamed it Douchesynthesis.

The Expanse was the highlight of day one.

The Expanse is pretty good, right? I’m talking both the books and telenovela series here. If it weren’t for its dippy main character, it would almost be perfect.

But enough literature facts. Geoff Engelstein’s cardboard take on The Expanse wisely sidesteps Jim Holden’s yessiree space adventures in favor of hardcore scheming. For the most part it’s a light area control gig, where fleets permit the growth of influence in bases across the system. The bigness of space makes cautious positioning key, and a lot of time is spent getting your fleets into the right spot, jockeying for influence, and sometimes yelping about “Why did you attack me when he is right there?”

The big twist is that The Expanse actually rips a few great ideas from card-driven wargames like Twilight Struggle or the COIN Series. Action cards permit either action points or powerful events, rolling out of the deck like boxes of black market noodles on Ceres. Take a card’s action value, though, and your opponents might get a whack at its event. It’s just light enough to run smoothly, and the whole thing takes maybe an hour and a half to finish, but there’s a delicious amount of depth on display here. Especially once the various factions start flexing their powers. Watching Protogen wipe out an entire system with the protomolecule was the highlight of the convention’s first day. 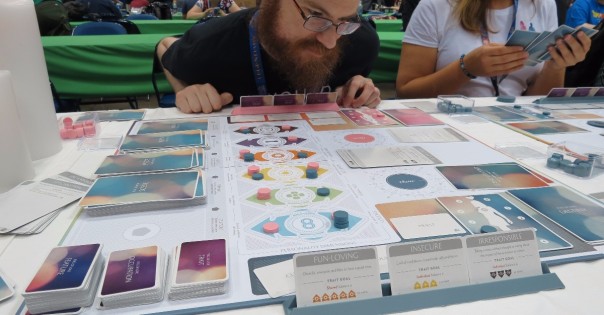 It’s a romantic comedy board game, from meet-cute to a third act almost-breakup. It ran a little long, in part because our improbably attractive game teacher spent a lot of his time distracting us with his smile, and also forgetting to explain the win conditions. Turns out, victory is almost as complicated as the moray eels of love itself, and either player, or neither, or both, can “win.” Even getting out of the relationship alive, or amicably, or as the Good Guy who then goes on to ghost that asshole and win over half of their mutual friends over to their side — and the good ones at that — can constitute a good day.

All in all, it was definitely adorable, and I liked some of the ideas it explored. Having your old-fashioned aunt stop by to disapprove of your relationship, or dealing with the crushing expectations of your first Christmas together, or suffering from communication problems (original!) all nail the same situations we’ve seen repeated in summer romcoms a thousand times over. 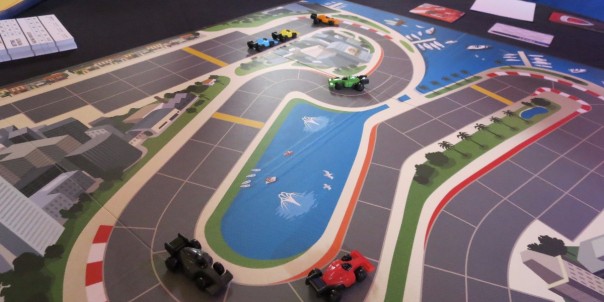 This looks nice, doesn’t it? Little cars. Blue bays. Sailboats. All the things that scream, “Nice.” But then you bid on a rattlesnake of a driver, bid on him when he peels ahead in the early race, only to bite your hat when some jerk slides around him and hugs every single bottleneck from here to the finish line.

Seriously, this game is so mean. It’s terrible. We renamed it Doucheforce, and made up a theme song, and sang it together when the red car won by hugging the turns and keeping us locked behind him.

It helps that it’s not really a racing game. It’s entirely possible to win without your car being the first to cross the finish line. This mostly comes down to the fact that it’s really a betting game, and buying a crummy car and correctly assessing the real winner is an entirely viable strategy. I mean, it wasn’t for me. But for somebody else I imagine it could work.

If I learned only one thing about Red Scare, the social deduction game that requires those red-lensed decoder glasses that I mostly associate with Norman the Nephite, it’s that it should never be played in dim light. Decoding the game’s cards seems clever enough, but truly,

Do Not Play In Dim Light.

It’s been far too long since I’ve played Codenames, so its five-by-five grid of clues and confusion was a welcome sight. Even better that playing it as a cooperative game is far less stressful than the original team battle. You and a loved one are both responsible for getting your partner to guess some portion of a shared set of words. The trouble is that you might have overlapping words, places where they don’t overlap, and even spots where one player’s word is blocked by the other guy’s assassin. Be extra careful about your clues, because now there are three of those jerks to offset the friendlier nature of the game.

And it’s lovely. Truly. I even look forward to its team mode, if only because it dulls the competitive edge that always made the original feel like a testament to which of your friends was smarter with words.

And that was day one!

Posted on August 17, 2017, in Board Game, Convention and tagged Board Games, GenCon, Not SaltCon, Space-Biff!. Bookmark the permalink. 8 Comments.