I’m in love with a cube-pusher. 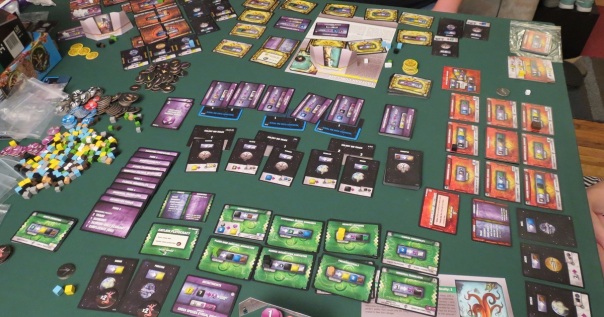 Sidereal Confluence is one weird game. It’s about four to nine alien races setting aside their differences, pooling their resources, and mutually uplifting one another. It’s like the formation of the United Federation of Planets, if the various member races hadn’t all been bipedal and largely shared the same values. So a bit like Star Trek, but way crazier. Still, while there will be one winner to guide the Confluence once the shouting quiets down, the whole thing is downright edifying.

At first glance it looks like your usual commercial engine thing, albeit devoid of any aesthetic choices beside bare functionality, much the same way a DVD player manual is functional. Every single card in the game — and I mean every card — represents what we call a “converter.” That’s a scary way of saying you put something in and get something out; like a plant drinking in carbon dioxide and producing scrubbed oxygen. That’s all. Nothing sinister. One converter might take three green cubes to produce one yellow, one blue, and a brown. Or, if you want to get thematic about it, it transmutes organic material into energy, biotech, and industry.

Nobody is going to be talking like that, though, and that’s perhaps the one significant downside of Sidereal Confluence. There you have it. The downside.

Not that you’ll miss it, because there’s plenty to think about instead. Sidereal Confluence is a negotiation game where everything is on the table. Resources, yes. Rentals, yes. Technology sharing, yes. Bribes? Duh. In stark contrast to most games in this vein, promises are binding, so don’t go thinking that you’re free to shaft some future co-member of the Confluence.

If you’re anything like me, then your head is probably buzzing a bit. Don’t worry, it will pass. Sidereal Confluence is like that, and it takes a few rounds to get a feel for how it works. But for the sake of clarity, let me give you a sense for what might happen in the span of one minute of a ten-minute trading round.

Imagine you’re the Faderan Conclave, also known as “Yellow.” These are the ancient dudes who have brought the Confluence together. They’re also arrogant dicks, relying on their relic worlds and patronage of other species to look good. In game terms, this means they’ve got a deck of special cards that let them do all sorts of nutso things, and they earn points by telling someone that they “acknowledge” them, then hoping they invent something nice so it looks like the Faderan had something to do with it.

Meanwhile, three other races are in on the negotiation. You’ve got the Caylion, the plant-folks who struggle to colonize worlds but then colonize the crap out of them with super-jungles. The Yengii are living crystals who don’t share technology automatically the way everybody else does — instead, they license it out at a premium. Then there’s the Zeth, the jerks who run protection rackets and steal from everybody who didn’t trade with them that turn.

So, you’re the Faderan. You’re hoping to make a deal with the Caylion: one of their souped-up jungle planets for temporary use of one of your relic worlds, Thil’s Demiring, which converts yellow and black cubes into points. Problem is, the Caylion are being belligerent. “We have yellow cubes, but it’ll take us a full turn to gain more black cubes, so we won’t be able to run that converter this turn,” is something a totally real person totally might say.

Fortunately, the Zeth are lousy with black cubes. So you strike a bargain with them, one black cube for one of your greens, provided you also accept an envoy. This takes a moment to consider, because envoys mean the Zeth don’t have to spend as much to steal from you in the future. But, hey, this trade will make you immune for now. Next turn is next turn.

So you lose a green cube to gain a black cube. Then you swap that black cube to the Caylion along with your Thil’s Demiring, finally picking up a Caylion-improved planet in the process. At last you can leverage it to get what you really wanted all along: a license for Poly Species Corporations from the Yengii, which you can use to upgrade your Matter Generation plants. Hoo boy, now you’re cooking with antimatter!

Then you remember that you could have forced each of those races to accept one of your acknowledgement tokens. Shameful.

Okay. The thing about Sidereal Confluence is that it makes zero sense to outsiders. It’s like speaking a new language, one where the nouns are cubes or cylinders or ships, the verbs are various exchange ratios, and the adjectives are emphatic head-shakes or outstretched hands. It’s a straightforward enough tongue once you’ve been immersed for thirty minutes, but it’s got a learning curve like a launching rocket.

It doesn’t ease the transition that each of the nine races are so infuriatingly original. Of course, that’s also one of the primary things that makes Sidereal Confluence so wonderful. Upgrading the mega-factories of the Kt’Zr’Kt’Rtl offers an entirely different challenge from the colonial demands of Kjasjavikalimm’s client nations. A match played with the universal resources of the Unity will feature different opportunities and challenges from a match played with the interest-generators of the whale-squid Eni Et.

The beauty of the whole thing is that it’s like a two-hour exercise in the subjective nature of scarcity economics. Every player’s shield for hiding points and ships also displays a rough exchange rate. Three little cubes are worth two big cubes are worth one cylinder are worth one point are worth three ships. Say it until it’s committed to memory. But as resources dwindle or boom, a tiny brown cube could be anything from literally worthless to easily the equal of many times its starting value. In such an economy, the most patient player may well be the one with the bunker of food once everybody else begins to starve.

For my money, the Yengii are bigger jerks than the Zeth.

Look, Sidereal Confluence isn’t an easy sell. It’s as tough on the eyes as an Im’dril, and features such open-ended negotiation that it feels like being jettisoned into empty space and told to navigate home. I also once promised myself that I’d never recommend a game about conversion ratios between cubes.

But it’s worth it. For one thing, it’s one of the most laid-back real-time games out there. You’ve got ten minutes (or so) to trade, but it’s rarely hurried. Advice flows freely because it’s a game where someone else’s positive performance usually translates into more resources for everyone, and favors can be exchanged as freely as currency.

Not that it isn’t cutthroat. Nothing in life is worthwhile unless there’s a chance of abject failure involved. But Sidereal Confluence manages to dull the sting. At two hours regardless of how many people are playing, it’s just long enough to give your actions some weight, but short enough that losing doesn’t mean the entire evening is a loss.

Either way, Sidereal Confluence is a singular accomplishment. It may be tough to decode, look like a spreadsheet caught flu, and eventually cause slivers, but it’s also one of the freshest takes on negotiation I’ve ever seen.

Posted on August 15, 2017, in Board Game and tagged Board Games, Sidereal Confluence, WizKids. Bookmark the permalink. 15 Comments.