Alone in the Jungle

There’s an undeniable romance to the notion of finding a long-lost city in the middle of an inhospitable landscape. It’s the sort of thing that caused men like Percy Fawcett to wager — and ultimately lose — his life in pursuit of Z in the deepest reaches of the Brazilian Amazon. To brave dangers, starvation, the uncertain meetings with the indigenous, and to arrive battered and thinned yet alive at the foot of a monumental geographic discovery; it almost sounds worth the risk. And I’m the sort who avoids taking my daughter to the park.

The Lost Expedition is only loosely based on Fawcett’s doomed expedition, instead opting to capture the broad strokes of perilous exploration. And unlike its source material, it’s a success. 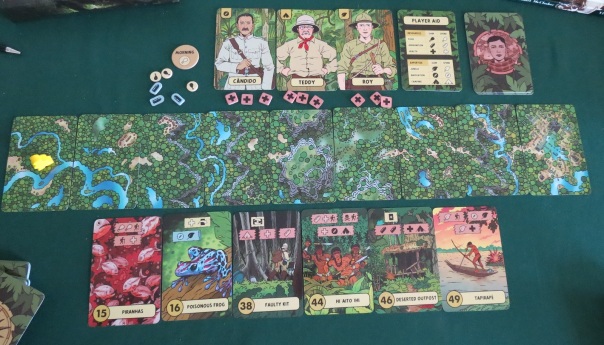 Picture for me, if you will, a lengthy stretch of jungle between you and El Dorado. There are numerous dangers between your base camp and that golden destination. Poisonous or fanged (or both) beasts, locals who may or may not be grumpy about your intrusion, even environmental pressures like a torn pack, hot afternoon, filthy water, or steep climbs. Everything standing in your way will slow you down and gradually sap your strength and resources.

At least most of the time. Maybe someone will be willing to trade with you. Maybe an animal can be shot for meat. Maybe climbing that hill or slipping from the beaten path will see you inching closer to your goal.

Maybe. There’s a constant pressure to that word in The Lost Expedition.

This is a game about laying out cards in a conga line of terror, most of which represent the very bad terrible no-good things that befall your expedition party, and hoping they don’t kill you before your next meal. Many of these cards present a few small decisions laid out in colorful boxes, split between those that will happen no matter what, those that present multiple choices, and the occasional optional box. Meet a black panther lurking in the brush, for example, and you’ll have no choice but to call upon your knowledge of the jungle — a “check” that will likely wear down your party a bit — but then it’s up to you whether to shoot the stalking predator for meat, leave some food behind as a distraction, or just let the thing maul you. If that last option doesn’t sound optimal, there’s a good chance you won’t actually have much of a choice, seeing as how your own stockpiles of bullets and hardtack may have already dwindled to casings and crumbs.

In fact, there are plenty of times when you won’t have much say in matters at all. Whether it’s a card that just stinks (spoiled food is spoiled food) or a crucial decision landing when you’ve run dry of lifesaving resources, these murky waters run thick with desperation.

Spoiler: he eats them.

Of course, you usually have plenty of flexibility over when you play a card, and that’s where the bulk of The Lost Expedition’s real choices come in.

Each day is split between morning and evening, and the way cards resolve between them is somewhat different. In the morning, everything you lay out will resolve in numerical order. It’s a good time for carefully selecting the dangers you’re already well-prepared to face. Later on, when the sun is falling and the light is dim, cards will resolve in the order you’ve played them. Which often means it’s a good time for hoarding those events that rearrange or skip cards, letting you bypass a river teeming with piranhas entirely.

It’s tougher than it sounds, in no small part thanks to its imposition of silence, much as in The Grizzled. You can only discuss your plans after they’ve hit the table, keeping your hand well out of sight until you actually unveil whatever peril will terrorize your party next. In solo mode, this translates to half of the cards spilling from the deck rather than another player, though this is balanced by a few allowances of its own. Notably, that you can add cards to either the front or rear of your conga line, gradually spooling out a series of problems and solutions.

In fact, the solo game is the real highlight here. One of the peccadilloes of playing with friends is that the game actually gets easier at higher counts. Since more cards are played each day, your options are expanded and your chances of successful cooperation are higher, not to mention that you’ll cover more ground before you need to stop for food. By contrast, solo mode is entirely about grappling with the unknown, pitting your limited knowledge and know-how against the trash the deck will throw your way. The decisions come more rapidly. So does death. It’s nothing if not thematically appropriate. When failure takes twenty minutes, it’s easy enough to reshuffle and give it another go. If only Percy Fawcett had so many easy resets in his back pocket.

Either way, The Lost Expedition quickly settles into an almost hypnotic rhythm. Each day sees a new hand of cards coming your way. You evaluate your options, lay them out, and determine whether you survived. Eat lunch. Use up your leftover cards in the evening. Eat supper. Watch your bullets, food, health, and even companions slip away one at a time. Do it all over again. Maybe you’ll make it to El Dorado before your last explorer kicks it. There’s that word again. Maybe. 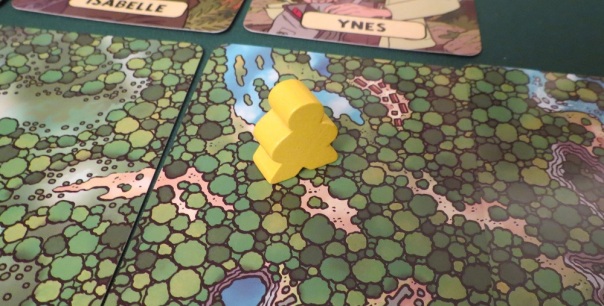 It certainly helps that it looks fantastic in the process, its Tintin-inspired roots capturing the horror of a chestful of leeches and the verdant fullness of the foliage. There’s no practical reason why the cards need to be tarot-sized. But when a game looks this good, practical is the last thing on my mind.

As you might expect, it can be incredibly frustrating watching an expedition fall apart after a half hour of good decision-making. The Lost Expedition doesn’t care if you fail, and minds even less if any given failure came down to the luck of the draw. It also features a few missed opportunities, especially when it comes to its map. By making your progress more about taking enough steps along a predetermined path and less about selecting a route or the uncertainty of the unknown, it flubs the opportunity to be twice as interesting.

Those are small complaints in the grand scheme of things. At its best, The Lost Expedition manages to spin one hell of a yarn, alternately black with despair and buoyant with hope. Surging forward one day only to bog down the next, losing two of your expedition on the very border of Z, or finally taking that extra step toward your destination, there’s plenty of drama here.

In the end, The Lost Expedition is a wonderful romp, thematically rich, beautiful to eyeball, and thick with tough decisions. It can feel thin at times, especially after a good half-dozen runs through its deck, which is ultimately what earns it my hearty recommendation rather than a breathless one. All the same, it’s one that solo gamers shouldn’t miss out on.

Posted on July 25, 2017, in Board Game and tagged Alone Time, Board Games, Osprey Games, The Lost Expedition. Bookmark the permalink. 1 Comment.