← Some Theses About Indulgence
Alone in the Jungle →

I was born and bred for word games. Which has led me to regard them fondly, but also sometimes with a simmering resentment you could whip up a stir fry in. What if I don’t want to spell QANATS for the thousandth time?

But Jeff Beck’s Word Domination is a clever one. And it largely has to do with the fact that it doesn’t focus too much on prioritizing the tougher letters. 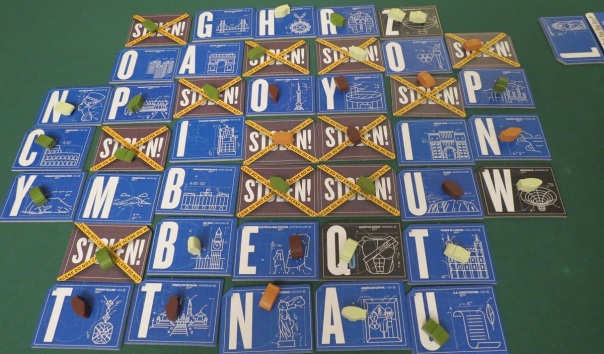 Before we get started, a word on setting. Just as Paperback was “about” the writing of pulpy novels, Word Domination is “about” world domination through high-stakes heists, burgling such locales as the Big Ben, Taj Mahal, Eiffel Tower, and the obviously ultra-secure Indianapolis Motor Speedway. It’s cute, and provides a nice excuse to assign each letter a destination and character some sort of villainous ability, but beyond that it doesn’t necessarily inform the gameplay in the slightest.

Which is fine, because nobody goes into Word Domination with the leftover mental energy for anything other than the assembly of very long words. Rather than focusing on all those Js and Fs and Xs, the letters that give many other word games their challenge, this one’s all about quantity over quality. If you’re the sort who’s spent the better part of their life preparing for Scrabble tournaments — as I did in my long and wasted childhood — you may find that your vocabulary terminates at eight letters.

A word’s length is critical because longer ones will slap down a bunch of your zeppelins on that sprawling grid of letters. If you use a letter with somebody else’s zeppelin on it, you’ll scare them off. Land a second of your own zeppelins on a letter — by using it twice over multiple turns, since individual letters can only be used once per word — and you’ll “steal” it. This blocks off that portion of the grid and stashes the letter in your personal collection. From that point forward, only you’ll be able to use it when crafting new words.

This does present a slight but crucial advantage to going earlier in the turn order. A typical game only lasts a handful of rounds, and being able to lock away a generous portion of the grid as swiftly as possible means not only that you’ll likely wind up with a bigger score, but that you’ll also have more tiles to use in future heists or in exchange for your character’s special ability. Opening the game with something ridiculously long is a great way to ensure that your rivals continue to clear out your zeppelins rather than placing their own. 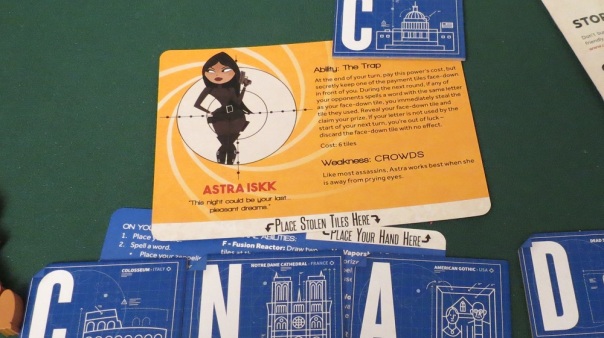 Each character brings her own ability to the table.

Word Domination offers just enough to mitigate this advantage, or at least to mask it. Foremost, every turn presents you with a new letter, which you’re forced to attach to the grid and deploy in any word you spell. This transforms the jumble of type before you into a minefield, especially when you’re stuck with a frustrating letter, and means that the board will continue to grow with each passing turn.

Even better, sometimes a tricky letter is exactly what you need. Certain rare letters provide benefits when employed. Q can give you an extra defensive boost, making it harder to scare off a zeppelin. J lets you use the same tile twice. K adds a second letter to somebody’s hand, forcing them to use both on their turn or pass in shame. W lets you use somebody else’s stolen tile.

It’s undeniably clever, and we haven’t even talked about the actual goal of the game. Rather than basing your score off the quality of your words, it all comes down to the tiles you’ve stolen. The letters themselves don’t matter in the slightest; it’s their placement that earns the bucks. Groups of adjacent heists are worth double, so it pays to cluster your steals. As the grid bulges outward, new opportunities appear to either add onto a block of your letters or hem in an opponent.

Word Domination is definitely a smart game. It makes spelling words into an act of area control and triggered superpowers. It’s not afraid of letting you steal opportunities from your friends as well as from the table. And it looks good in the process.

But it’s often as infuriating as delightful. Starting a turn with a crippling letter can severely hamper your ability to string together a caterpillar of a word, as can landing after a vocabularian in the turn order and watching in dismay as they gobble up so much real estate that your chances of nabbing anything for yourself are slim. Planning ahead is tough enough unless you’re a lexicographer, but when half the letters you were hoping to employ are nabbed out from under your nose right before your turn — well, Word Domination hopes you didn’t have anything going on tonight, because it plans to stick around.

Though hey, none of that might matter. Word Domination is unusually bright. It just isn’t the sort of bright that everybody will get along with. In the end, it’s the sort of thing I’ve been bred to love. It’s just that I didn’t love it as much as I’d expected.

Posted on July 18, 2017, in Board Game and tagged Board Games, The Fruits of Kickstarter, Uproarious Games, Word Domination. Bookmark the permalink. 1 Comment.

← Some Theses About Indulgence
Alone in the Jungle →