← The Space-Biff! Space-Cast! Episode #1: Paranoid Cuneiform
Magnates, How Do They Work? →

The Other House on the Hill

Things aren’t all right in Hunt: The Unknown Quarry. On a hill (not in a quarry), an old house sits, haunted to the rafters, scratching in the basement, the flapping of wings in the aviary—

And right there, that’s your problem, sir. If you want to build a big house on a hill without attracting your garden-variety haunting, you shouldn’t be installing things like aviaries. Big cages, spooky black-feathered birds — they’re all fun and games until a monster takes up residence and a pack of bounty hunters come calling.

Remember Clue? Or Cluedo, if you’re from the old side of the Atlantic? Remember when you spent two hours walking around that darn house as Professor Plum, gathering information, asking questions, making deductions, and then it turns out that the one who murdered poor Mr. Boddy was… Professor Plum? And you felt sort of weird tattling on yourself, like maybe it would be a better idea to just leave the house and hop a steamship for a distant country with no extradition laws?

In more ways than one, Hunt: The Unknown Quarry feels like Clue. Except here, being the murderer means you know it from the start, and you have a few extra names to cross off your list tonight. Also you might be a fairy or a lich.

Here’s the idea. There’s this old house (check), a bunch of investigators are there (check), and it’s up to them to use the powers of deduction to figure out who the baddie is (check). So they travel around the house, moving upstairs and down, poking around the lavatory and tastefully pretending not to have noticed the master of the house’s preferred method of birth control. Instead, they’re looking for clues about the monster’s identity. Discovering the Wasting card, for instance, means that the monster isn’t holding it in their hand, which in turn means the monster cannot be a warlock, gorgon, spirit, or vampire, because all of those creatures obviously have the Wasting power. If you’d paid attention in monster hunter school, you would have known that.

Merely figuring out the monster’s identity, however, is just the first step. Then, in Hunt’s biggest departure from Clue, our friendly investigators must go beat the snot out of it. 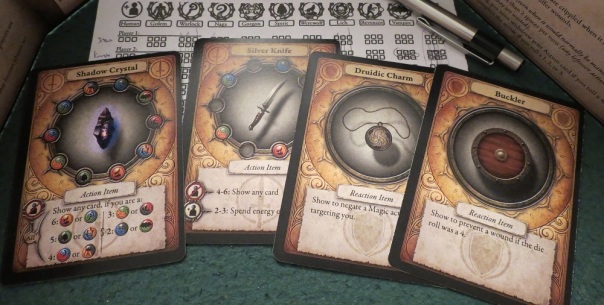 A peek behind the player shield.

In practice, this generally plays out in three distinct acts. First, the bounty hunters spread out through the house, investigating various rooms. Every so often, someone flips a card and jots something down in their book of clues, probably while trying to act normal. Everyone converges on that spot, only to discover that it’s just a magic pendant. Ho-hum. The second act begins once people have narrowed down the identity of the monster to maybe half the roster. Then they start prodding at each other, using items and weapons to try and figure out who the monster is, what vulnerabilities they have, stuff like that. Different items only affect certain monsters, so if you have a theory that Jessica Sable is really a naga or werewolf, you might find yourself backtracking to find the right item for defeating those particular species. It’s a little bit like voicing your guess of “Peacock in the Ballroom with the Candlestick” to your neighbor in Clue, except here you’re smacking them across the face with an enchanted pine bough and observing whether they burst into flames or merely furrow their brow in annoyance.

Of course, to prevent everyone at the table from figuring out every detail of what you’re doing, much of this is resolved as a private transaction between players. You approach the target of your suspicion and hand them a card. They look at it for a moment, maybe jot something down, and hand it back. Then you jot something down based on what you think they jotted down. Meanwhile, everyone is staring at the both of you. Did you just figure out that the quiet librarian-type is actually a man-eating beast? Or are you the beast, having just made a successful attack on one of their fellow hunters? At its best, Hunt is claustrophobic with the uncertainty of hidden identity.

It’s also claustrophobic with the twin knowledge that cheating is easy — and I mean incredibly easy, since many of the most important actions occur in silence between players — and that everyone at the table must understand all the finer points of the rules with impeccable accuracy or the game might fall apart mid-stream. This isn’t to say that Hunt is a particularly complicated game. Quite the contrary. But unlike most games, there’s no way to simply ask the fellow who read the rules what something means, or how to resolve a corner case, or what to do when you don’t recognize one of the game’s many microscopic symbols. Even reaching across the table for the rulebook might represent an uncomfortable potential tip-off to your foes.

Returning to the game’s three-act structure, Hunt reaches its crescendo when it becomes apparent who the monster is. Every bounty hunter with an inkling of the monster’s phylum will converge on its location, firing off bullets, swinging swords, and reciting incantations. Only one person can win, so it’s a race to deal that final blow. Sometimes the monster will get away, having crippled everyone who could pursue it; other times it will go down in a flurry of weapon strikes. Sometimes there are twists, such as in our most recent game when Geoff was so convinced that Mark was the monster that all of us began pursuing him around the house until he was crippled and begging for mercy — and entirely human. So we beat up Geoff. When it finally turned out that the monster was Jessica, half the investigators could barely stand.

Everyone tends to pile together when the monster is outed.

There’s a lot going on in Hunt: The Unknown Quarry. It’s got some nifty ideas, and does an admirable job of taking the Clue formula and transforming it into something considerably more cutthroat. Lurking around the house as a disguised monster, cornering a bounty hunter under the pretense of investigating your suspicions, then beating him ragged, is certainly more exciting than figuring out your own role in Clue’s inciting homicide.

Even so, I’m largely ambivalent. The first act, with everyone sauntering from room to room, tends to be dull rather than tense. The combat, expressed via the language of passed cards and rolled dice, is alternately frustrating and unsatisfying. Cheating, including the incidental variety that’s more mistake than malice, is all too easy. Perhaps worst of all, its final stretch feels more perfunctory than thrilling, more a matter of mobbing the monster and hoping everyone else flubs with the dice than one of clever positioning and artful plays.

Jeremy Lennert’s previous game was Darkest Night, an excellent cooperative game that only got better across its multiple expansions. Until Hunt: The Unknown Quarry gets its own sprucing-up, there’s little to recommend it.

Posted on June 14, 2016, in Board Game and tagged Board Games, Hunt: The Unknown Quarry, Victory Point Games. Bookmark the permalink. 1 Comment.

← The Space-Biff! Space-Cast! Episode #1: Paranoid Cuneiform
Magnates, How Do They Work? →