Fun (And Informative) Best Week 2014 Fact: One particular publisher has been highlighted every day of Best Week so far, and will be highlighted again today. Can you spot which one it is? Five space pennies for the victor, and off with the heads of the losers.

Yes, all of them. Off with all their heads.

Not the only game you can play with babies, but possibly the best.

Yes, the lowercase “o” is intentional. Abhorrent as it is, ugly and misshapen and imperfect and wretched, the wishes of the designer must nevertheless be—

We do not bow to the tyranny of those who cannot properly capitalize. Not here on Space-Biff!, bastion of good grammar and the freest of free speech.*

Let me remedy this immediately:

If there was a single game I played most of this year, it would be Oddball Aeronauts, thanks to the fact that it required no playing surface of any sort. The fact that it was actually a pretty fun game helped too.

In addition to writing about it more than twice but no more than four times, I played it on the freeway, in a movie theater, in line at a major board game convention, in line at a somewhat less major board game convention, on an airplane, on the toilet, on the airplane toilet, among other less-mentionable places. It isn’t the most flashy game on this list, or the most innovative, but it’s still one of the games I’ll be playing for years to come, tucked into my back pocket for those moments when a lack of tables and a surplus of waiting collide.

This was my first experience with the “just a few cards do everything, everything!” design philosophy of Carl Chudyk, and I’m glad it was. It looks like a lighter game than it is by a couple orders of magnitude, with its stock plastic spaceships and relatively slim deck of cards at odds with the utterly shocking complexity of the whole thing. A casual glance makes it look like a filler game — and then you get it set up and spend way too long figuring out how to properly leverage your cards, adding them to the central “impulse” to hopefully benefit you without also helping out your opponents.

Once it runs, it hums. There’s a surprising breadth to Impulse’s decision space, whether you focus on improving your empire’s personal “plan,” expand your technology, attack like a madman or enact terrorist actions against an overwhelming opponent — or some combination of the above. It isn’t the sort of game I’ll play any old time — it’s way too much of a brain-burner for that — but it’s definitely the sort of thing I intend to return to when I’m feeling extra smart.

You know what this means…

This is the oldest game on this list, originally published in 1995. And yet, Space-Biff! staff-human Adam’s favorite game of the year is also one of my personal picks for the way it blends short-term wagers with long-term strategy.

You’ve got a hand of cards, see, and while you’re probably holding enough troops to win any given battle, what about the battle after that? And the one after that? You may have conquered Modena, but if you run out of cards you might not get a fresh hand in time to conquer the other territories you need to unite the Apennine Peninsula. Along the way, I guarantee the other players will be bluffing their little pantaloni off to make you think you need to dedicate your best troops to win a battle that — surprise! — they had no chance of winning anyway.

In addition to being a really great game for experienced players, Condottiere is also an excellent gateway game, and we’ve used it on more than one unsuspecting couple in our efforts to introduce more people to better games than Uno. 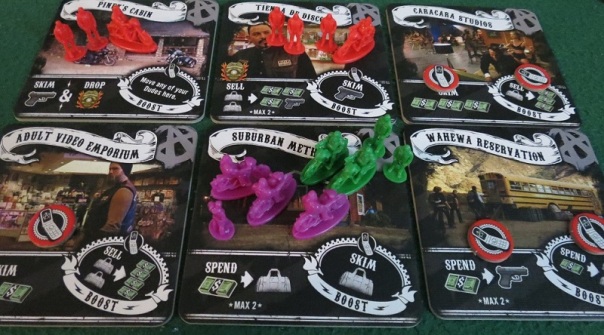 One more reason to steer clear of houses with pink tinfoil over the windows.

My most prized memory from Sons of Anarchy revolves around my brother-in-law going to jail, finally, after all this time being married to my sister, that scumbag.

Just kidding, he’s lovely. We went out to dinner just tonight, in fact.

This is another entry on Space-Biff! crewman Elliott’s list of “Games About Hidden Information,” and whether you’re threatening to roll up on a fight with guns you don’t actually have, or trying to downplay how many duffel bags of drugs your gang currently owns, it’s a big tacky masterpiece.

Speaking of Elliott’s “Hidden Information” list, here’s another one: a game about smuggling cheese into King John’s castle, but not to rob from the rich to give to the poor. No, just to make money for yourself, because that’s ye olde commerce for ye.

Sheriff of Nottingham is my favorite sort of party game, structured enough that it isn’t immediately won by the most flamboyant personality at the table, but free-wheeling enough that you can totally bribe your aunt into opening your cousin’s bag of contraband in exchange for some apples, only — sorry Aunt Liz — I ain’t got no apples. How do you like them apples? Tastes like a whole lotta nothing? Maybe that’s because they don’t exist.

Um. Forget I said that. Just wipe it right out of the old memory banks.

51st State is great and all — and I mean it really is pretty great — but the cleaned-up and family-ified version is so much smoother to play that its rougher sibling isn’t being let out of the pen to play quite as often.

Imperial Settlers does a pretty much perfect job of accomplishing its goals. Whether it’s the way you start with way too many options, only for one avenue of advancement after another to close off as you play, or the way each point is cobbled together from two or three different cards, or how the gameplay is friendly-ish but not too friendly, Imperial Settlers is easily one of the slickest reimplementations I’ve ever seen. Each of its four empires is distinct, with their own ideas about how to play the game… and then they break their own mold at surprising times.

If this were a television program, I’d ask you to stay tuned — because we’ve got more Best Week 2014 coming tomorrow!

* I mean, maybe. Don’t spread that around though. I’d really rather people not think of us like that, actually.

Posted on December 31, 2014, in Board Game, Lists and tagged Best Week!, Board Games, Space-Biff!. Bookmark the permalink. 7 Comments.