← Lords of Dixit
The Xia Drift →

The original Clash of Cultures was easily one of the best Civilization-style 4X games I’ve ever played, and was one of my favorite games from last year — despite three major problems:

1. There were no elephants.
2. The yellow miniatures were trapped in a state of perpetual melting (though this was rectified in later printings).
3. Really, not a single elephant to be found anywhere. The box showed elephants. So where were the elephants?

Let’s have a round of applause for Elephants, shall we?

The long-awaited Clash of Cultures: Civilizations recently appeared upon the granite porch of Château de Thurot, and I’m happy to report that it tosses a dash of three major ingredients to the vanilla Clash of Cultures formula, and all three are exceptional.

The first, naturally, is that we’re finally seeing elephants on the field, tooting their trunks and going on drunken parades. Cavalry also make their debut appearance, and between the two there’s quite a bit more room to tailor a custom fighting force, as opposed to the homogenous clumps of infantry that dominated the Clash of Cultures of yore. Best of all, these units do a great job of complementing one another rather than just supplanting the basic infantry unit. Cavalry deal extra damage, though only when paired with infantry, and elephants excel at soaking up hits, though sometimes at the expense of dealing them. It’s a well-struck balance, especially since cavalry and elephants are a bit trickier to recruit — though more on that later.

Oh, and barbarians are more powerful nowadays too. Not only do they get the same mounted troops, but there are also pirates that harangue you on the seas, blocking resource collection in a wide radius unless you build a navy of your own to root them out. It makes coastal cities a smidgen less appealing, or at least encourages players to focus on at least a small navy if they want to collect food and gold from the sea. These are awesome additions, making for a much more unpredictable game once barbarian settlements start dotting the world, and making them tougher to root out.

The addition I was most worried about was the inclusion of specific civilizations. See, I liked taking control of a blank-slate nation, because I never once felt railroaded into a single path of development. If I wanted to build a world-spanning navy, I could do that. If I wanted to be an autocratic despot, done. Have free education and research everything? Sure. But now that there would be fourteen distinct civilizations, each with their own personal add-on technology board and special leaders, I was concerned that my empire would be forced down a particular path.

And yes, it can be a problem at times. But not as often as I assumed.

Before we get into that, the civilizations are mostly awesome. All of them give you a handful of new advances, like how the Japanese can learn “Subterfuge” to cancel pesky action cards, the nomadic Huns can move their smallest cities around the map, Carthage can ally with pirates to bolster their naval strength, and the Celts can turn barbarian settlements into trade partners and victory point generators. Some even get specific starting lands, like the Vikings starting out near water so they can sooner take advantage of their longships, the Maya nestled in their resource-rich terraced mountains, and Egypt learning to live in the desert.

The leaders are also a nifty addition. Basically, you have a leader unit who can travel the map, giving special bonuses to cities or armies. Caesar, for example, can conquer a city and immediately build units in it without spending an action. Leonidas fights best in battles where he’s outnumbered, Queen Boudica can keep a settler when it founds a city, and King Hiram can establish extra trade routes. Don’t like your leader? Kill them during the status phase and install someone new — though keep in mind you only have three, and enemies can capture your leaders for extra points. Very cool.

The part that occasionally bugs me is that while most of the civilizations offer multiple advancement paths, or at least don’t feel overly restrictive, there are a couple that feel rather situational. Take the Celts, for instance. Nearly every one of their special advances relies on a healthy barbarian presence on the map, and although one of their advances lets them place new barbarian settlements, it still requires an action, giving them a fairly specific set of strategies to pursue in order to take advantage of their unique traits.

Then again, I really should highlight that this is a minor quibble. By and large, these new civilizations breathe new life into the game — certainly, it will take a huge number of games before you’ll have seen them all interact.

Clash of Cultures is as grand as ever.

How Exciting Does an Apothecary Sound?

While elephants are great — I mean, of course they are — probably my favorite addition has to be the new buildings. Rounding out the original quartet (fortress, port, temple, academy) are three new structures.

First up is the Market, which provides two advantages, one nice and the other utterly rad. The nice bit is that it lets you take advantage of trade routes connected to your city by other civilizations. Which, yeah, is nice. However, the rad part is that it lets you import elephants and cavalry, giving each civilization the chance to access these special units. It might sound weird at first that Japanese will have access to elephant warriors, but it works out: certain civs can research advances that will let them recruit special units anywhere, whereas a market transforms your city into a singular hub of recruitment.

The other two structures are simpler but still worthwhile investments. The Obelisk is a guaranteed point since it will never abandon your faction after being conquered or culturally influenced, making it an interesting choice for cities threatened by armies or culture. And the Apothecary lets you “save” units that die in battle, meaning a single devastating defeat might not be quite so devastating anymore.

In an expansion full of great additions, these are the best bit. In vanilla Clash of Cultures, a full-size city would be the same as any other full-size city. Now, cities will often have distinct specializations, advantages, and vulnerabilities. Should you add a fortress to that market-city, or just hope your opponents are content to trade with it? Should you bother with so many resource-gathering ports now that you can use apothecaries to spend less maintaining your military strength? Also, since these new buildings are tied to the bottom-row advances, those techs are now much more formidable options early on. 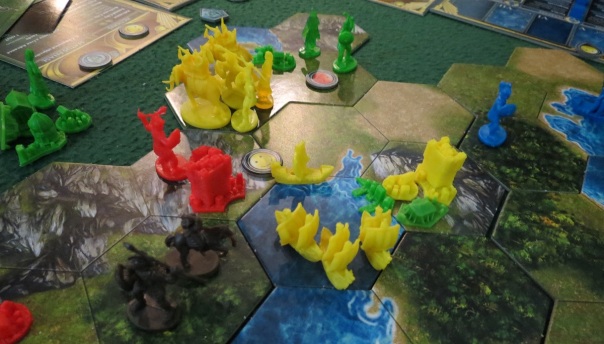 Huns vs. Persia vs. Carthage vs. Phoenicia.

All in all, Clash of Cultures: Civilizations is probably the best expansion I’ve played this year. Rather than just adding more or feeling like a cash-in, it absolutely smashes up the Clash of Cultures formula by giving everything new definition — the new units make armies distinct, the new cultures make each civilization distinct, and the new buildings make each city distinct, and all in a way that the original game never quite managed.

In short, if you were a fan of the original, this is an absolute must. If necessary, ignore everything I said above and fixate on the elephants. They make Clash of Cultures complete.

← Lords of Dixit
The Xia Drift →