Once upon a time there was a game called Himalaya about yak traders plying their wares in the exotic mountains that separate the Indian Subcontinent and the Tibetan Plateau, and I absolutely did not play it. I’d never even heard of it.

Well now I’ve played it, or something very like it. Libellud, publisher of some of our favorite games like Dixit, Seasons, and Ladies & Gentlemen, recently rebranded Himalaya as a game about noble heroes who wander the countryside, recruiting soldiers and fighting monsters as they go — and let me tell you this new setting is a relief, because I’m buried up to my ears in games about yak trading. 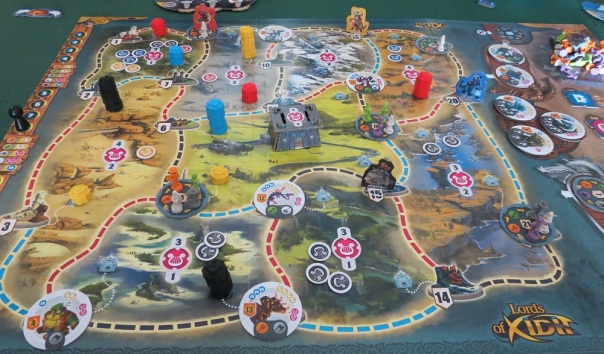 The big land of Xidit, overflowing with monsters and opportunities.

At its clockwork heart, Lords of Xidit is a game about programming. Secretive and preemptive programming. See, you’re a noble idrakys (that means “hero” in Xidit-speak) and — well, you probably get the idea. Heroes, monsters, peons who do ninety percent of the work for zero percent of the credit. Et cetera. The important part is that each round has everyone programming their six moves before actually taking them, then all at once galloping across the countryside atop their steeds (or turtles or dinosaurs or whatever else they’re mounted on), recruiting those warriors and fighting those monsters… or, quite possibly, being beaten to it by another idrakys.

Victory is an elusive thing, awarded to whomever best manages three different categories. You’ll need magic towers (so your idrakys can boast about how “Mine’s taller than yours” at his ten-year idrakys-school reuinion), bards to sing bawdy songs about your deeds throughout the land, and piles of gold. And the only way to get your grubby mitts on these things is by killing monsters.

Unfortunately for you, this creates a tricky contrast that drives most of Xidit’s gameplay. Monsters are only vulnerable to specific fighters; a giant lion-dragon might only be killable by an archer, axeman, and cleric, for instance, while a mouse-thingy must be slain by peasants and a mage. You’re therefore forced to stop by different cities for recruits — only, each city will only give you their weakest fighter, and you can only recruit from each city once each round. So while you want to be the first to reach a monster, you often want to reach the recruiters last, or third, or in whatever order will let you recruit that mage or axeman you need in order to beat a specific monster.

In addition to secretly programming your moves to arrive at each location at the right time, you’re also showing as little information as possible. For example, every few rounds lets you show your troops in order to gain a bonus. However, you aren’t forced to show them all. Do you show those five archers you’ve been hoarding to ensure you get a couple more gold, or will that tip off your opposition that on your next turn you’re going to make a beeline towards that one monster? 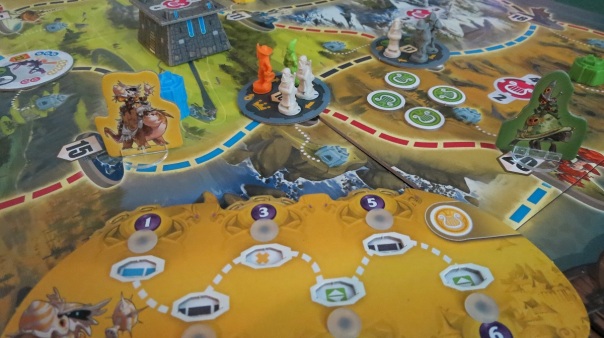 For example, in the picture above, there’s a monster off to the left that can only be slain by a buddy-cop pairing of archer and cleric. As the yellow player, you’ve got the archer — a surfeit of archers, actually — but no cleric. Thankfully, two nearby cities offer clerics!

So what should you do? Do you immediately head over to the nearer of the two cities and wait a couple turns before recruiting, relying on the hope that other players might have cleared out the worthless peasant and archer? Do you go up the road to the more distant city and try to get that last cleric there, even though there’s only one for sale? Or should you just bite the bullet and go to both cities, recruit the peasant and the axeman, and hope better monsters make an appearance later on?

Lords of Xidit is at its finest when it’s making you agonize over points like these, struggling to guess your opponents’ moves and then second-guessing the moves you just programmed into your movement board. “I just need to make one quick change!” you’ll find yourself saying right when everyone’s hands are hovering over the table to reveal their plans. Then you’ll spin the last of your board’s wheels into place and someone’s eyes will flit nervously between your hidden board and his own, before grunting, “Hold up, me too.”

It gets trickier. For one thing, you can see the upcoming pair of monsters and recruitment tiles, so like a ghostrabbit-slaying precog (which is what Minority Report should have been about) it’s possible to head over to where a monster will appear partway into the round. The most laughable moment is when you think you’re the cleverest idrakys ever born, so you show up at an empty city, try to slay a nonexistent monster, then trot out of there right as the monster appears in your stead. Well done, hero. There’s also a census every few turns where you have the option of revealing your accumulated forces in exchange for extra coins and bards and the like — though you aren’t forced to show all your guys, or even any at all. Instead, you’ve got to decide whether it’s better to maybe show only a few of your soldiers and risk not winning a census category, or show too much and therefore tip your hand that you’ll be hunting a particular type of monster.

Lots of archers for sale this month.

All in all, Lords of Xidit is eminently competent, and I hardly have a single complaint. Well, okay, there is one thing that annoys me: there’s a certain brand of monster called a “titan” that shows up later in the game. These should have been cut out, because they can often determine the course of the game even though they’re often easier to kill than the regular monsters. And I suppose it’s the type of game that requires you bring a certain attitude to the table, because when you mis-program a turn and end up wandering the eastern side of the map and not seeing anybody or recruiting anything or slaying any monsters, it can be a little embarrassing unless you’re willing to see the humor of your situation. Laugh along, idrakys.

But other than that, I’ve had a phenomenal time with this one. Two members of my gaming group, one of our oldest veterans and one of our two newest players, have both declared this to be one of their favorite games we’ve ever played, which is a testament to how Xidit manages to be both really simple and still offer a lot of room to out-think your opposition.

In short: it isn’t yak trading, but it’s still about as much fun. Provided you like yak trading. And if you hate yak trading, I can absolutely guarantee this is better.

Posted on November 26, 2014, in Board Game and tagged Board Games, Libellud, Lords of Waterdeep. Bookmark the permalink. 4 Comments.