HISTORY TIME! If there are two figures that stand out as the most condottiero-ish of the condottieri, the first is Francesco I Sforza, the captain who leveraged his mercenary band to install himself as the Duke of Milan in 1447. The dude made it into Machiavelli’s The Prince as an example of bad employment decisions, which seems like pretty high praise to me. The second is Giovanni dalle Bande Nere, the great-grandson of Francesco, who became the last of the great condottieri when a cannon killed him in 1526, proving just how obsolete armored condottiero knights had become.

Anyway, Condottiere is about all of that: romantic and duplicitous mercenary captains doing what they do, conquering Italian city-states and strutting around like it’s nobody’s business but the Pope. And bluffing all the while, desperately hoping their rivals never figure out exactly how vulnerable they are.

The above description might make Condottiere sound like a complicated or lengthy game, because, sure, this is a theme that could easily be spun out into a 14-hour epic, full of rising and declining dynasties, intricate betrayals, fourteen-year-old star-crossed lovers, hooded assassins with blades that pop out of their frilly sleeves, flamboyant patronage of the arts, and Leonardo da Vinci. That’s a game I’d love to own, but realistically probably never find the time to play.

Instead, Condottiere is a shockingly compact game, packed full of far more tricky decisions, bluffs, feints, betrayals, and prostitutes than a brisk 30-minute game has any right to contain. The lion’s share of its appeal is found in how it seamlessly merges two halves, each slight enough that they wouldn’t warrant much of a game in their own right, but together create an impressive whole.

The first half is the cards and the little battles you’ll fight with them. Each player starts with a hand of ten of these, full of different mercenaries, courtesans, priests, drummer boys, heroines, scarecrows, and seasons. A single round of battle sees you either playing a single card or passing, either committing more of your forces or opting out of the remainder of the fight. Some of these cards, mostly the mercenaries, are worth strength when played into combat. Some modify that strength, like the seasons and drummer boys, which might make or break your plans or the plans of other players — a well-timed winter can sap a strong army’s strength as surely as a well-timed spring can rejuvenate a weak one. And others let you bluff your opponents, like the scarecrows that let you return a card from your battle line back into your hand.

It’s simple stuff. After some basic arithmetic to tally up everyone’s strength, the highest value wins the battle.

Four points. Woo. (only four because of the Winter card)

But as I said, that’s just the first half. While it’s tempting to splurge your entire hand of ten cards and definitely win that first battle, the decisions you make in each battle have rippling effects across a long-term game. See, battles are fought over actual places, printed across Condottiere’s little map of Renaissance Italy and all her city-states. Win a battle and you place one of your cubes in whichever city-state you were contesting, showing that you’ve just conquered Siena or Venezia or Ancona or wherever. Then the war continues in a new location, and all the troops you spent on the previous battle are gone forever.

There are two brilliant twists to this. First, your cards don’t replenish, at least not until nearly everyone has completely emptied their hands. So if you dropped all ten cards on winning that first battle, well done! You beat your opponent’s 12 strength with a whopping 38! Your reward is a single territory and that you get to sit out of the next few fights! Wahoo! Should have gambled on winning with as few cards as possible!

The second twist is that certain cards impact the long-term campaign. For instance, usually the winner of the previous fight gets to choose where the next will take place. This is a huge bonus, since you can win either by reaching a certain number of territories or by reaching a smaller number of contiguous territories. It pays to create a solid block of conquests, so picking where a fight will occur can be a huge advantage. However, whoever played the most courtesan cards can filch that privilege, leading the condottiere token around by its nose. Similarly, playing priest cards lets you place the “ Favor of the Pope” token to block battles and cut off strategic moves.

Basically, there are two ultra-simple games being played here, but once they’re put together they’re anything but simple. A couple rounds in, everyone will be counting each other’s cards, bluffing, bargaining — “You do realize that if you don’t block Geoff right there, he’ll get three adjacent territories and win, right?” — and generally doing their best to manage both tactical and strategic situations to their advantage. 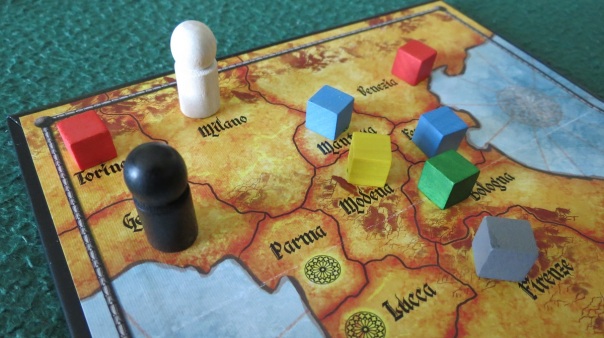 Once more unto the breach!

If you’re interested in Condottiere, it’s imperative that you play with the “Hidden Cards” variant, which hides whichever card you played most recently. This is a game of bluffing, after all, and there isn’t anything quite so nerve-wracking as a face-down card that could be a 1-strength mercenary or a 10-strength heroine, and having your entire decision of whether to dedicate another card to battle riding on that unknown card’s identity. Look into your friend’s eyes. How well does she lie? How well does she bluff? Did you even know she was like this?

All told, Condottiere is a beautiful, simple game that nevertheless captures so many of the things that make board gaming such an appealing hobby. Namely, stabbing your friends in the back. Lying to your friends. Betraying your friends. Burning bridges. Destroying relationships that took years to build. You know, that sort of thing.

Posted on May 19, 2014, in Board Game and tagged Board Games, Condottiere, Fantasy Flight Games. Bookmark the permalink. 7 Comments.