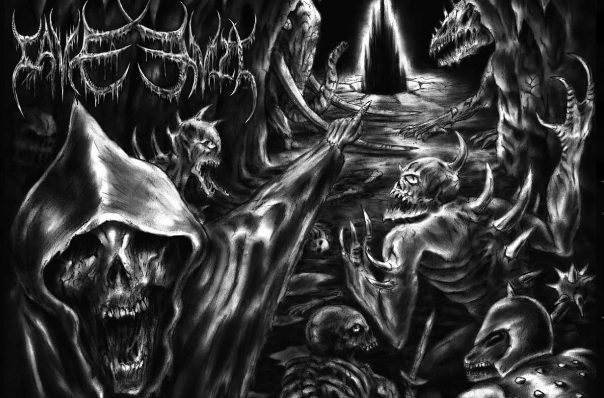 How best to describe Cave Evil? Picture me, if you will, seated in front of you; probably on a futon, and likely with my feet comfortably seated atop a gliding ottoman, though the ottoman isn’t strictly necessary. I have both hands raised, about three feet apart: “On my right,” I say, motioning with the appropriate hand, “is the most eurogamey Eurogame possible. Unthematic, spit-polished mechanics, usually about appeasing some local medieval lord. Or often trains.”  Now I gesture with the other hand, just to help you keep up. “On the left we have the most trashy Ameritrash game of all time. Theme so thick you can’t breathe without getting a cough. Lots of rules that don’t necessarily mesh into a coherent whole, but instead excel at telling a memorable story.”

Can you guess where Cave Evil falls on my unusually elegant and accurate scale?

If you guessed on the right, with the Eurogames, you’re so wrong you just might be in the wrong place. Are you sure you’re interested in board games? Though to be fair, if you guessed the left hand, you’re also wrong. See, Cave Evil is actually about half a mile down the block on my left, at the grocer I never go to because it doesn’t stock good yogurt.

What I’m saying is, Cave Evil is the most unrepentantly, true-blue, defiantly Ameritrash game I’ve ever played. 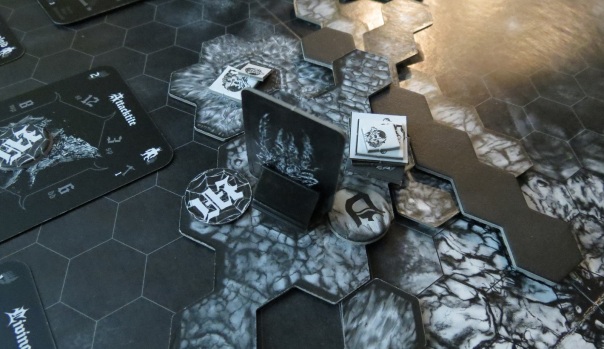 A fungus monster protects a treasure trove… I mean, a gore trove.

When it comes to theme, Cave Evil spreads it on thick, often with chunky crimson paint that emits a faintly (and theme-enhancing) nauseating stench. Every aesthetic decision, from the faintness of the text and the nigh-illegible Gothic font on many of the cards, to the drab shades-of-black-and-gray illustrations, is there to enforce the idea that you’re an ancient necromancer, likely driven insane from untold centuries buried at the heart of a mountain of corpses, whose sole goal is to assemble an army of demons, reanimated cadavers, and miscellaneous horrors, and murder your rival necromancers for no other reason than because misery can’t abide company as well as it likes to advertize. It’s dark, distasteful, definitely contains some art and themes that carry the possibility of offending those with more squeamish or non-demonic sensibilities — and it loves all those things about itself. It’s like that kid at school who thought the huge scar across his face was pretty rad, and couldn’t give a damn if some of the other kids thought it was icky. 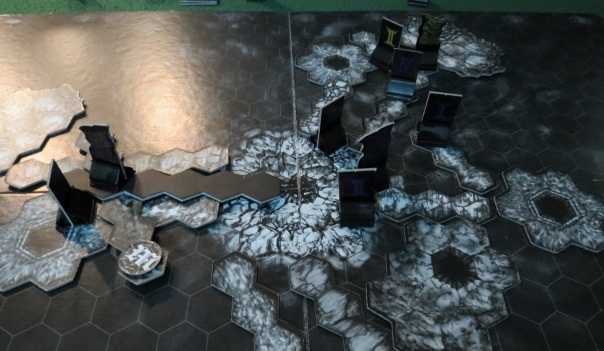 Even if this sounds like your cup of tea, or at least a cup of tea you’d be willing to sample with the barest sip, Cave Evil isn’t willing to play easy quite yet. Take a look at that picture above. Can you tell what’s happening? Even approximately? It’s hard to make out the dynamics of a game by just the pieces on the board, at least until you’ve figured out Cave Evil’s particular brand of board readability.

For instance, in that picture, my forces are the guys occupying that main cavern in the middle. My necromancer lurks at the rear, protected by an emerald snake he recruited by beating it into submission and a giant spider that poisons its foes. To the north, he’s got a Horned Hunched One racing through those tunnels to assassinate the diggers of an enemy necromancer, who are desperately trying to cause a cave-in to keep my forces from closing in and murdering their master. To the east you can see my own band of diggers, excavating an alternate route into the enemy lair in the event that the enemy diggers beat my monster and complete their demolition. And nearby, a Giant Slime Puddle sits and… I dunno, bubbles. Just for good measure.

More than that, my necromancer has cast a spell that has collapsed part of the cave onto the other enemy necromancer in the west, trapping him until his band of servants can extricate his bony ass. Not to mention the wandering monsters in the west, or the various spawn pits that might spew forth monsters or items or resources at any moment. Those are all fairly important considerations too.

But Cave Evil doesn’t really show you that, at least not intuitively, or clearly. Instead, each of those markers is a squad, filled with monsters and items and spells. Let’s take a look: 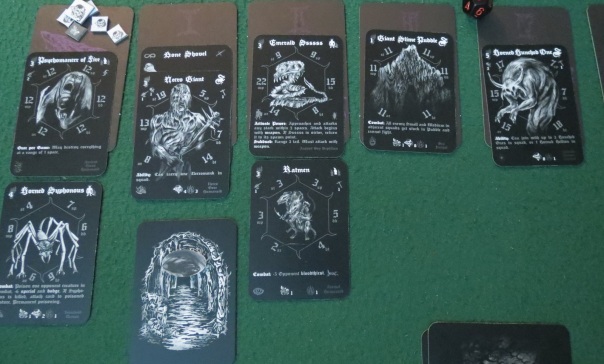 There we have them: my necromancer with his spider, the squad of diggers equipped with a shovel to help them dig faster (and an excavation card they’re busy working on), my emerald snake with some ratmen for support, my creeping puddle of slime, and my flanking Horned Hunched One.

Now imagine up to four players, each with multiple squads, all mingling and attacking and flanking and casting spells and hunting down resources and running them back to their master — because, yes, every squad carries not only its own items, but its own supplies. And imagine keeping track of all of them. Not to mention all the wandering monsters you might stumble into, because there might be over a dozen of those at any given time too.

That’s how much of an Ameritrash game this is. The design is sprawling. Messy. And deliciously unapologetic about it. So unapologetic, in fact, that the game is about killing off your fellow players, and the first guy bumped out of the game is going to be sitting there on his hands and thinking about how he could have been a better necromancer.

Ultimately though, all these eccentricities come across as strengths rather than weaknesses, as Cave Evil excels at making all its parts spin in harmony. It takes a while to learn how to look at the board and see the actual squad compositions rather than just the inexpressive markers themselves, but once you’ve figured it out, everything clicks together into a surprisingly logical and pliable beast. Like a dozen cadavers stacked and fused into a corpse-golem, Cave Evil takes its disparate systems and turns out a creature with its own unique stagger.

It isn’t even particularly difficult to learn or play, in spite of its intimidating forty-page manual. Turns are simple: draw a card from one of four decks, each corresponding with a resource (metal, gore, shadowflame, or the chaotic abyss that can produce pretty much anything) and each more powerful but also more prone to spit out dangerous events than the last; then have each of your squads move around and take an action. Now and then you might have to look up some bit of errata, like how to move squads past each other (usually they can’t; cramped are the tunnels of the necropolis) or how to lay down your newly-drawn excavation card or how to conduct rare ranged combat; but most of the time the indexed rule will conform exactly with what you expected, because so much of the available options in this game make sense. As much sense as a necromancer’s war against other necromancers can make, anyway. 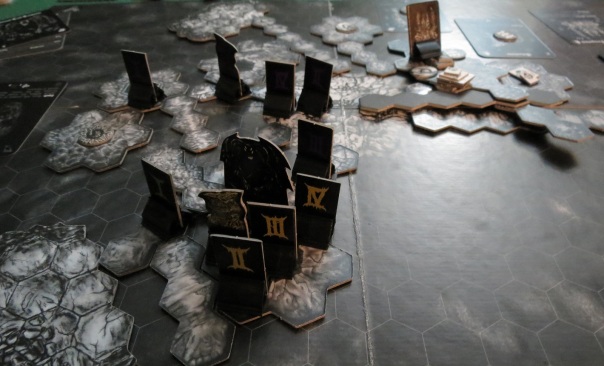 The Eternal Evil Emperor vs. The Greatest Necomancer’s Army.

The best part, of course, is the way Cave Evil effortlessly crafts these absurd memorable moments. I don’t need to emphasize this game’s brilliant theme any more than I already have, so suffice it to say that digging into the earth and uncovering a temple protected by a sleeping fungus and an enviable cache of gore is one of my gaming highlights of the past few months, as are the times a friend collapsed a ceiling on my entire army or when the Eternal Evil Emperor awoke and murdered each and every one of us for disturbing his nap.

This is the sort of game that’s totally cool letting you uncover and recruit its most terrifying monster and rushing your opponent before he even has anyone in his service at all. Or letting you wage cautious war with excavations, collapses, and careful flanking maneuvers until you have your enemy cornered for good. Or just bypassing your enemy’s secret fortified throne room and shattering the life-giving chthonic crystal stashed in his starting lair instead. In short, Cave Evil understands the appeal of Ameritrash, and it’s all too happy to pick up the torch and run it past a hundred finish lines, cackling like a madman and mooning the old ladies in the stands. It’s the sort of game that proves that, now and then, it’s good to be trashy.

Posted on January 27, 2014, in Board Game and tagged Board Games, Cave Evil, Emperors of Eternal Evil. Bookmark the permalink. 11 Comments.