← Plains of Dust, Caravans of Silk
The Thurotyville Horror →

Raiding the Vault of Darkness

I wasn’t too thrilled about the announcement of Hemloch: Vault of Darkness from Small Box Games. Okay, that’s a lie: I was ecstatic for the thirty seconds before I read the description and realized it wouldn’t be a fine-tuned legacy edition of my beloved Hemloch in the vein of the fantastic new Olympus Edition of Omen: A Reign of War. Then I was sad and worried, because Shadow of the Sun, the other game set in the Hemloch universe, didn’t make much of an impression on me. And thus a damper was placed on my expectations.

To make matters worse… no, wait, come back — I promise this story has a happy ending. 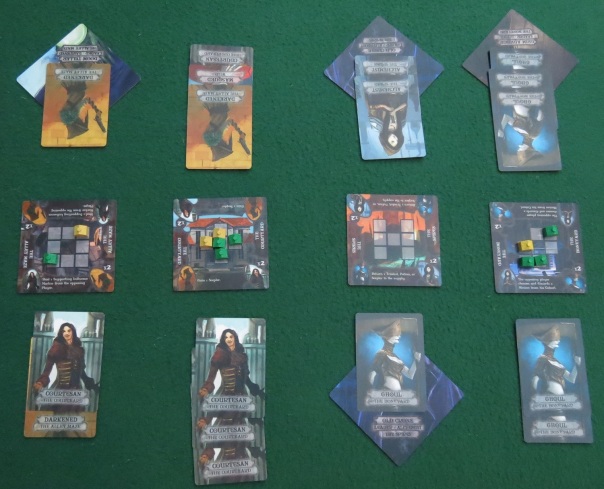 An orderly conflict for the City of Hemloch.

As I was saying, Vault of Darkness ranked about as high on my hype meter as last summer’s news that Walmart was selling Twinkies three days earlier than advertized. As in, barely at all. There were a lot of little ways the original Hemloch won me over, whether its many ways to earn victory points, sadistically cutthroat strategies, or diverse draw decks. Ah, those draw decks — they were like treasure chests of glimmering possibilities, each card a cold-blooded flick of the knife to your opponent’s jugular. And there were a ton of them, both decks of 30 cards packed with 13 unique minions, all possessing wild abilities that could swing even the most desperate game to your favor if you played them right. On the other hand, Vault of Darkness used nearly the exact same deck from Shadow of the Sun, so each of its minions was identical other than name and color, with no distinctive special ability to set them apart. Strike one, Vault of Darkness.

Strike two landed when the game arrived. I’d been asked to review it by a handful of readers who’ve grown accustomed to me reviewing anything John Clowdus designs, so I’d caved and there it was in my mailbox, every bit as tiny as you’d expect from a company called Small Box Games. Imagine my surprise upon discovering that the backs of the cards don’t have the name of the game on them; in its place, they’ve got “Shadow of the Sun” emblazoned right across the middle, like this entire game was a ruse to offload a thousand unsold sets of another game. The manual announces that you can use its cards and little Monopoly houses to play Shadow of the Sun as a bonus — no shit, I grumped out loud, it says so right on the components themselves.

And strike three? Well, not to spoil the tone of this review, but strike three never came. Instead, Vault of Darkness gritted its teeth, stepped up to the plate, and lobbed a homer right over the fence. Sure, maybe it also spat some rancid chaw onto its own shoe, but in the end it’s still the hero who scored a home run.

Sick of baseball metaphors? Me too. Let’s talk about Vault of Darkness instead.

The spoils of the Vault of Darkness.

Vault of Darkness isn’t so unlike Hemloch, at least in terms of their rough outline. Like that older game, your goal is to seize control of a twilight city before the rising sun ushers in a decades-long era of daytime, and you’ll guarantee the success of your coup by gaining influence through a number of avenues. You could (and should) exert control over the city’s four districts by sending minions to curry your house’s favor, adding markers to stake your claim in the process and ensuring those markers remain adjacent for extra points. You could fill your house’s treasury with trinkets, potions, and scepters, or exchange them for special powers. You could also assemble a reserve of minions or seek auxiliary support. The point is, there are a lot of ways to spread your influence, and as in Hemloch, the instant you neglect one option is the moment you’ll look back on as the hour of your downfall when you’re working as a serving wench until the next solar cycle.

Where Vault of Darkness differs from Hemloch is in its titular “vault of darkness.” This is a treasury of powerful relics, each of which attracts thugs to your cause, bribes special “leader” minions, steals artifacts from your opponent, manipulates influence markers, or assassinates rival henchmen. At the start of each round, five of these ten relics are dealt to the center of the table, and each player gets to take turns until they’ve selected and enacted two.

In addition to those special actions I mentioned above, each relic lets you gain and place a minion, and this is where it stops mattering that the four basic minion types are just different colors. See, thanks to the Vault of Darkness relic you picked, and the choice of which district to deploy your new minion into, each minion has a wide array of possible uses. They can help strengthen your house in any of Hemloch’s four districts, though they’ll be most useful either pulling off “schemes,” which activate extra bonuses, or in their “home” districts, where they’re worth double influence. This might make it sound like minions have a mere two uses at any given time, but depending on your chosen relic, it might be expedient to send a minion to a location where she neither schemes nor acquires an influence bonus. There are other types of minions too, the most impressive of which are the leaders, worth loads of influence but inflexible, never able to scheme — and, often worse, their deployment telegraphs your intentions fairly plainly.

The many pools one dips into when one wishes to rule Hemloch.

This mechanism alone is worth the price of admission. It’s a solid system where both going first and going second are accompanied by tangible perks, letting you either get the jump on choosing a relic or having the flexibility to react to your opponent.

Best of all, since you can only pick one card at a time, the game becomes a constantly-shifting puzzle wrapped in tension bacon. Would you rather take control of a leader to solidify your control over a critical district, or should you try to pull off a beneficial scheme? Or should you try and preempt your opponent by denying him access to the relic that will let him steal one of your scepters, because the bastard has been doing that to no end? Whatever you pick, no matter how devious, your opponent is going to be dipping into the same pool of machinations in an all-too-brief moment. This is one of those rare games where the opponent’s turn is absolutely gripping, if only because you’re bracing for impact the entire time.

There are other nice things I could say about Vault of Darkness, but I think you get the gist. It’s an engine that generates tough decisions, then takes your choice and chews it up and shows you how you could have made a better move. I suspect I had more “Oh, I should have done this” moments in a half hour of Vault of Darkness than you could usually find in my entire game-laden weekend.

There are many ways to win influence.

Vault of Darkness has one significant problem. It did little to hamper my enjoyment of the game’s underhanded disputes, but it’s big enough that it sure was trying.

That problem is documentation.

Small Box Games has never been stellar about getting the rules written out in a clear manner the first go around, and this is a prime example. Not only was one of the pages of my manual completely blank, prompting a trip to the internet box to pen in what was missing, but there are all sorts of special circumstances left undocumented.

For instance, one of the special minions is called a Servitor. The rulebook establishes that Servitors are obtainable only through special actions, and that although they don’t add much influence, they always trigger the scheme of the district they’re deployed to. Unfortunately, roughly ninety-five percent of their appearances occur during the “Night’s End” phase, which takes place after all that relic stuff and sees both players taking a special action like adding a minion to their cohort, deploying an extra minion from their cohort, or using up one of their treasures. The problem is that during the Night’s End, no district schemes can be triggered. Which means Servitors are functionally worthless, and may as well not even be in the game.

Are Servitors special, and activate schemes even during the Night’s End? Should they appear more often than they have in the handful of matches I’ve played? Or are they every bit as superfluous as they seem? The rulebook won’t be answering those questions, or some others that might nag at you.

A disorderly conflict for the City of Hemloch.

Even so, Vault of Darkness is fantastic. It’s tense and cruel in all the right ways, promoting the harshest of measures on your path to victory. It isn’t for the noncompetitive, easily-bruised egos, or people who can’t handle a couple rules ambiguities (at least until the forthcoming clarifications land).

But if you can hack it, Vault of Darkness is your huckleberry.

Posted on October 26, 2013, in Board Game and tagged Board Games, Hemloch, Small Box Games, Vault of Darkness. Bookmark the permalink. 6 Comments.

← Plains of Dust, Caravans of Silk
The Thurotyville Horror →