Plains of Dust, Caravans of Silk

I’ve covered the work of Todd Sanders before — a whole buncha times, in fact — but Serica: Plains of Dust is still one of his more unusual designs. Yes, more unusual than haunted fantasy kingdoms or clockwork airships, Serica is about the famous 4,000 mile Silk Road strung from the Roman Empire to the distant Han Dynasty. It’s also a deck-building game, though being designed by Todd Sanders, you can bet it’s unlike any deck-building game you’ve ever played. 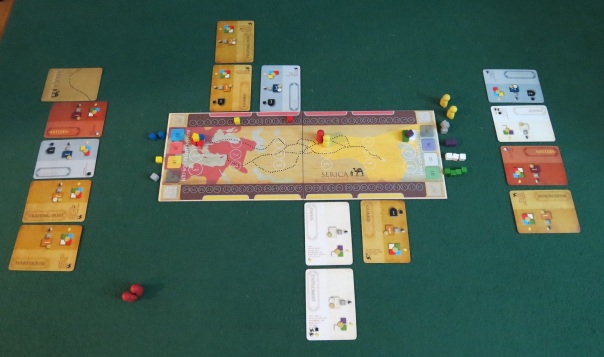 Like some of Sanders’ other games, Serica starts off with a bona fide information overload. Both players have a starting deck, slim at six cards, a couple of them randomized each game. There’s a sideboard full of extra options, each card inscribed with enigmatic iconography. Lastly, there’s the board itself, depicting two empires hungry for exotic goods (which at this point are nothing more than contextless colors) and the vast empty space that separates them.

Of course, since Sanders is an old hand at crafting easily-grasped pictorial languages, it doesn’t take long to piece things together. Your goal in managing the trade of either Rome or Chengdu is to bring in more points than your opponent before either of you completes a tableau of ten improvements. There are three ways of accomplishing this goal, though all differ in reliability and security. The simplest method is to build new cards to your tableau, removing them from your deck and hopefully setting them up in an order that will earn a few extra points. There’s little risk in this, since cards become safe from the predations of your opponent the moment they’re built, but there isn’t much profit to building. Another option is to raise an army to kill the bandits that prey on helpless caravans — and help yourself to their ill-gotten spoils in the process — though it takes a while to build enough improvements to tackle the hardiest outlaws. Lastly, you could ship goods across the plains of dust to your opposing empire, whether glassware, wine, or gold as Rome, or spices, porcelain, and silk as China. This requires first the production of trade goods, then loading them onto caravans, and then running the risk of attack as you trudge ever so slowly across the desert. The tradeoff, of course, is that while the other two methods earn victory points a paltry handful at a time, a successful caravan is as valuable as three or four dead bandit gangs, or as many buildings.

Thankfully, the entire thing is simple to manage. Each turn sees you carefully treading through multiple phases, all of them straightforward enough that it’s nearly impossible to get lost in spite of all the symbols and the constant tension of the victory point race. You’ll produce new goods, buy cards, build cards, battle bandits, send out caravans, and do the usual shuffle’n’draw found in every single deck-building game since the dawn of Dominion. Easy peasy Romanesey.

And overall, it’s a good time, with a lot of little details recommending it. It’s easy to figure out, free if you’re willing to print and put it together yourself, has a unique take on the often-overdone deck-building mechanism, and comes packed with a fabulous theme backed by Todd Sanders’ usual flair for recognizable graphic design.

Best of all, it makes for a good competition. Even though it’s simple, there are always multiple ways of progressing along the victory track, meaning the path to success is more dynamic than you’d initially think. Should you tighten up your deck by building some cards to your tableau, or could you use that Guard and Settler later on? Should you risk a trio of caravans loaded with silk and porcelain, or do you have a hunch a bandit chieftain might show up to claim the riches for himself? As the Han Dynasty, should you use your tricksy court cards to steal some Roman technology, or are you better off playing nice and negotiating trade deals? On the other side of the coin, the one adorned with some Caesar’s fashionable curled locks, should you invest in military strength to patrol the Silk Road to take down bandits, or are there not enough of the buggers showing up to justify the expense?

The breadth of the decision space is a pleasant surprise, providing plenty of victory paths that aren’t immediately obvious.

In spite of all of that, Serica is less recommendable than some of Sanders’ other games — which isn’t to say I don’t recommend it, just that it isn’t as smooth as some of his other titles I’ve covered.

For one thing, it would’ve been nice to see more options for competition between players, like maybe the ability to use bandits to some sort of advantage. As the game stands, the early appearance of bandits can completely halt all trade and force players into a tedious shopping spree to get some troops, but the instant a player — usually Rome — sets up a tidy garrison, it’s no effort at all for him to leap ahead with easy victory points and free trade goods because there’s no danger to launching military campaigns against the baddies. There’s no rolling dice or variable outcomes or depletion of your force after a successful victory, just a number comparison for predestined victory. For such an interesting game, it’s a surprisingly flat way of dealing with combat.

The mechanics underlying the building of cards into your tableau also seems a little wonky. The rewards for building cards in proper order seem disproportionately lower than the rewards for other activities, but since there’s no limit on how many cards you can build at a time, it’s possible to earn a marginal lead in victory points, then slap down the last four buildings in one turn. This will end the game instantly, sans buildup or even caravans. With so many nifty things going on, it’s a shame that the game can reach its conclusion before many of them make an appearance.

All in all, it feels a bit more like a prototype than a fully polished Todd Sanders game. It’s still fun to play, has a compelling theme, lots of unique mechanics, and you can’t beat the price of free, but I hope Todd revisits it in the future, because this has all the underpinnings of a fantastic print’n’play title.

Posted on October 23, 2013, in Board Game and tagged Air and Nothingness Press, Board Games, Print and Play, Serica: Plains of Dust, Todd Sanders. Bookmark the permalink. 4 Comments.