It’s About Building an Island Fortress

Island Fortress strikes me as a deeply silly title for a boardgame. So matter-of-fact. No mystery to it. It’s kind of like naming Archipelago, I dunno, “Unethical Caribbean Colony” or something. Or calling Netrunner “Corporate Hacking.” I’m not sure why it strikes me as so unusually stolid when there are plenty of poorly-named games games out there, but whenever I look at the box, I hear an accountant telling me, in the flattest voice possible, “We are now going to begin constructing an island fortress.” Then he starts eating all the crackers and talking about his favorite equity funds.

Thank goodness I don’t judge books by their covers unless they’re romance novels, because otherwise I would have never learned that Island Fortress is the best time you’ll ever have sending dozens of people to their deaths so that you can play Tetris.

The beginning of a two-player game.

Thank goodness I also don’t judge books by their stories… wait, that’s not right. I don’t judge boardgames by their stories. Which is good in this instance, because the theme of Island Fortress, which is all about building a fortress on an island (because “a storm is gathering,” it says on the back of the box, though it’s more fun pretending the fortress is for oppressing peasants), is tacked-on by the admission of the game’s own creator. It was originally going to be about building the Great Wall of China, and it was titled Huang Di, which is a great name for a boardgame because everybody loves foreign languages.

Okay, I’m done talking about the game’s title. And while the theme may be tacked-on, it isn’t so noticeably tacked-on that it ruins the drywall behind the poster. Actually, it’s surprisingly serviceable. By order of the island’s Governor, you’re a member of a team of architects tasked with setting up the fortress as fast as possible. The job’s completion will leave only one architecture opening on the entire island, so it’s up to you to be the best architect the Governor has ever seen. 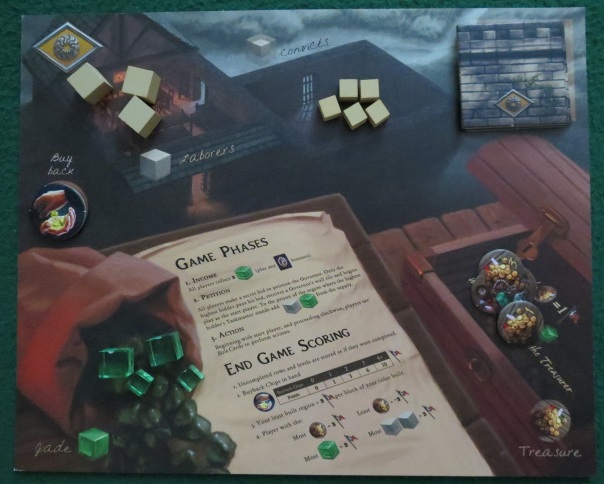 The player mat and resources.

Before doing any actual fortress-raising, however, you’re going to have to manage some resources.

Since the island’s worth is measured by its extensive jade mines, you’ll spend a lot of time using that jade to hire laborers and prepare bricks for the castle walls. This is where the “role cards,” the game’s central mechanic, come into play: you have five, each representing one of your underlings who’s responsible for an aspect of the fortress’s construction. The recruiter is great at hiring brave young men from the local towns (and they must be brave, since the survival rate for fortress-construction is about fifty percent), or just yanking convicts out of the local prisons to make the final sacrifice (their survival rate is approximately zero percent). The planner oversees the shaping of stones for the walls, the builder directs the raising of those walls, and the treasurer finagles more jade for you to spend. There are alternate tasks for each, but we’ll talk about them later.

Finally, there’s your taskmaster, a sour sort who works hard at getting others to work hard. He’s the most important of your subcontractors, because playing one of your role cards means it’s used up for the rest of the round — unless the taskmaster comes round to get them off their lazy butts and get back to work. In effect, he lets you duplicate one of your roles… and for enough jade, even he can be convinced to put in some extra effort.

Figuring out the optimal way to order, play, and replay these roles is the first key to unlocking Island Fortress. You constantly have conflicting needs — specific walls to erect, extra jade to collect, dwindling laborers and convicts to organize, expensive bricks to bake — and each need must be met in quantity. Instead, your workers are determined to give you just a little bit each turn, so every round becomes a puzzle to determine which role to prod into working twice, and even which sub-action you want each role to take. Instead of collecting jade, for instance, the treasurer can sell some of your convicts back to the prisons for treasure, which in turn means more jade every time he collects. It’s a balancing act, and it’s the second-best part of the game.

The demands of the fickle Governor.

The number-one best part is the constant game of Tetris you’re playing with the fortress walls. Everyone thinks the Governor is a stern leader, but it turns out he’s kind of artsy fartsy. Instead of being much bothered by the trifles of island security, his number one priority is having specific designs built into his castle walls.

To this end, you have a hand of favor cards, each showing a design the Governor would really like to see up on his walls. Many of your role cards’ sub-actions relate to these, like the planner who can figure out new designs or the builder who can show off the ones you’ve already completed. So while you’re working hard to earn recognition points by completing brick rows or collecting treasure or trying to make soaring towers — you know, useful stuff — you’re also doing everything in your power to catch the Governor’s eye with your fabulous stonework. Also, he’s an indecisive sort, so he doesn’t much mind when his architects restructure one another’s designs in their mission to fulfill his whimsical requests, or when they knock down some of the fortress’s reinforcing bracers to make way for ever-more-breathtaking facades. It’s no wonder all those convicts die every time they build some walls.

When it comes to the resource management and wall-design race, Island Fortress is surprisingly good. Announcing the completion of an absurd design that will bring you extra jade each turn and more favor with the Governor during each round’s bid to go first is priceless. There’s even plenty of opportunity to block opponents with the Governor’s worthless contributions to the castle walls, or with wall stacks of your own, or by working over their seal to replace one of their blocks with one of yours.

There’s hardly any luck involved, either: the only element is which designs you draw, and even then you’re likely to mitigate chance because your planner card lets you draw a whole bunch and choose which to keep, so you should always be able to find a design you can fulfill.

All in all, it’s a tight game, definitely one of the better projects to grow from a freshman Kickstarter campaign.

Nearing the end of a four-player game.

As to whether I recommend Island Fortress… that’s a hard question.

I used to play a weekly game night with a group of scientists, engineers, and computer programmers, of which I was the token dumb member. They loved games that were highly computational: lots of numbers, probabilities, counting ahead, optimization of moves, that kind of thing. I didn’t win very often, but it was fun to see how people who were very different from me enjoyed their games.

To me, gaming is usually about storytelling. Creativity. To them, boardgames seemed more about math and pattern recognition. And I don’t mean that as a judgement call in any way.

I think Island Fortress would appeal to them for the same reasons it strikes me as a little dry. I think they’d like figuring out the perfect order for their role cards, the best way to raise their walls so as to complete designs while blocking each other’s, the perfect amounts of jade and laborers and convicts and wall segments so that they never had too few or an ungainly surplus. Because in that respect, Island Fortress is nothing short of fantastic.

Posted on August 3, 2013, in Board Game and tagged Board Games, Frost Forge Games, Game Salute, Island Fortress, The Fruits of Kickstarter. Bookmark the permalink. 4 Comments.