← Kemet the  Jackal
Another Auto Shuffler Review with Dan and Steve →

(Half) Alone Time: Sorrow of Salilth

The beleaguered city of Salilth.

First Light. We wake to cold and to sound of screams outside the gates of Salilth. Jewel of the cities of Lassadar, home of our citadel and one of the great centers of the Council of Wardens, is surrounded. It is the time we have feared would arrive — the Grayking is come. We Wardens have prepared as best we as are able but will it be enough? I seems we are to be the first to meet openly with he who was once our brightest promise.

With an intro like that, we know immediately we’re looking at another entry in the Shadows Upon Lassadar series by Todd Sanders. I talked about the first one a couple weeks back, and found it to be both an excellent example of solo boardgaming and completely free. Except for the price of ink and paper, of course. Oh, and scissors! You’ll need those too. As for the two questions that are undoubtedly hanging precariously from the edge of your tongue — whether Sorrow of Salilth is also free, and also wonderful — well, the answers lie below.

First things first: rest easy, it’s free. Todd Sanders could probably have gotten away with giving the first game away and then charging you out the nose for the other five in the series (a time-honored tactic of drug dealers, according to my high school D.A.R.E. class), but instead he’s taken the high road and offered the files online for nothing. You can find them over here, down in the “Files” section. It’s five pages in total, one of which will require some deft scissoring by your agile and clean fingers, but other than the effort of printing and cutting everything out (and probably gluing the smaller pieces to some cardboard or balsa or something), it can be had for the low low price of zero dinars.

Go ahead and assemble it. I’ll be here when you get back. 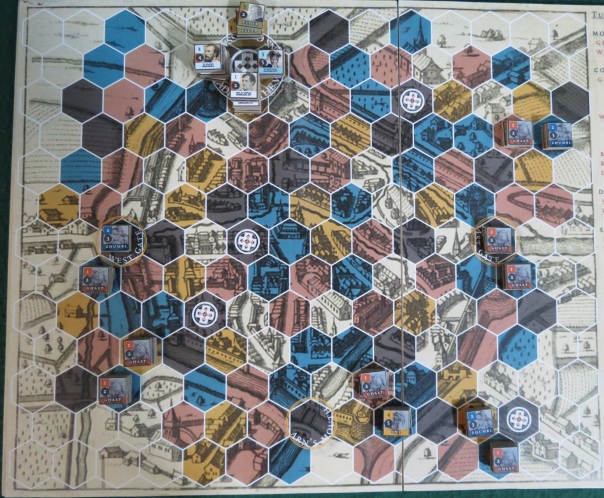 The Grayking’s servants begin their invasion.

As for the second question, I can affirm that Sorrow of Salilth is every bit as wonderful as The Grayking is Risen, while at the same time being so totally different that if you were to chop out the lore and a couple pieces of art, it would be completely unrecognizable as taking place in the same world. Which is frankly surprising and commendable — commendable because a quick look over at the BGG forums reveals that the first game is still considered one of the best print ‘n play solo games out there. It would have been the easiest thing in the world to design some extra quest cards, update the art, add an unnecessary mechanic or two, set the narrative a couple hundred years after the first, and release it as Shadows Upon Lassadar 2: Grayking Harder.

Instead, what we get here is 100% original in terms of mechanics, components, and even genre — rather than a card-driven quest, it’s a miniature battle game, right down to the fact that smaller forces move faster across the map.

Plotwise, it’s a prequel that tells how the Grayking came to be trapped out on the Barrier Planes and hungry for a shadowy return in the first place. Turns out he’s a fallen Warden (which raises the question: what were the Wardens warding if not the Grayking?), and now his monstrous horde is invading Lassadar’s capital with intent to pollute the Citadel of the Wardens. Which probably means more than tossing empty Sprite cans on the floor. Maybe dark rituals. Either way, let’s not find out, hm?

It’s a setup that creates some natural and delightful asymmetrical warfare for such a small game. It can be played either solo or with two (which is why this is only a “half” Alone Time installment, since the game is better with human minds at the helm of both sides, though it’s still eminently playable solo), with one side taking the role of the Wardens and the other playing as the Grayking’s horde of icky servants. Everything about them is different. The Wardens are fewer in number and besieged from all sides, but they’re generally stouter in combat and also have the benefit of having a smaller area to defend; whatever their obligation is to the people of Lassadar, they sure don’t feel much need to keep the city itself out of enemy hands. Instead, their goal is to keep their Citadel standing long enough to set up four Barrier Gates around the city that will shut the Grayking out forever (or at least until the events of the original game). The Grayking’s servants are more numerous, come from every conceivable direction, and gain some nasty bonuses when clumped together.

And instead of being a straightforward dice-fest, there are two cool mechanics pumping life into the heart of Sorrow of Salilth. Let’s take a look at those.

The first is the nomograph, which earns coolness points for being a nomograph, and determines all sorts of little things. See, when two armies clash, you break out the game’s little ruler, place it at two points, and pluck off new information like fruit from a low branch.

For instance, let’s say you have a lowly pair of Hands, and they’ve bumbled into an intimidating group consisting of a Ymp and a Ghast. Your enemy’s spirit strength is 7 and he occupies a powerful blue hex, so you place the rule on the chart at those values, and it reveals that they’ll be rolling three extra dice during this combat. Which is a lot, considering it brings the totals up to two dice for you and five for your enemy. Gulp. After some rolling (I won’t go through all the rules here since you can look them up yourself for free), you lose the battle. “Back to the nomograph!” you cry, lamely. This time a comparison of your relative spirit strengths (your 4 to the enemy’s 7) reveals that your side must take 3 spirit damage — so say goodbye to both Hands.

This system may take a little getting used to, but it’s also tactile, different, and far more interesting than reading values off a boring old table chart. And in addition to calculating damage and how many extra dice the evil team gets to roll, it also fuels the second nifty mechanic.

It’s called the Warden Spell Rondel, and it picks up even more coolness points for using the word “rondel.” The concept is that during combat, while the bad guys are getting loads of extra dice to roll and making the situation go from dire to truly hopeless, the good team is throwing spells around to level the field.

Unfortunately, the Grayking’s influence has disrupted these magics, so the Wardens don’t get to pick their spells, at least not as easily as they would have otherwise. Instead, you compare your spirit value to the hex your army occupies, which tells you how many spaces you can move your spell marker, which in turn determines what spell you can cast. So if your marker was sitting on the Sparkblades spell and your army had 4 spirit and were situated on a yellow hex, you’d get to move the spell marker up to 2 spaces. You’re required to go around the rondel clockwise except at certain spots that let you double back, so you could cast Memory to increase your spirit value, Enwrap to get an extra attack die, or Whisperrune to shield another force from combat (you could also take Stillness, but that would be a stupid idea because it’s a weaker version of Memory).

As the Warden player, your management of this rondel is paramount to your success. You can gain special attacks against particular enemy types, Bind their armies from moving on the next turn, re-roll your weak attacks, or lock their dice while empowering yours. You’ll even find yourself throwing less critical matches in order to set the stage for more powerful combos in the future. It’s an excellent mechanic that further differentiates the magic-tossing Wardens from the high-rolling Grayking swarms.

Gathering at the chokepoints.

Which is great, because that differentiation is all-important. Not only does it spice up the gameplay as Ghast and Zhumbi forces roll past a battered company of Hands and Minds, but it’s also integral to the theme. As with the previous game, Sorrow of Salilth is dripping with it — images of monsters prowling the streets beyond barred doors that shelter huddled and terrified townsfolk; a few trained warriors and magicians taking to the streets to curtail the flow of demons and battle their way to the dormant Barrier Gates; horrible Ymps squaring off against powerful but feeble Elders; and the Grayking watching (sorrowfully? gleefully?) as smoke rises over Salilth and screams carry on the wind. It’s evocative stuff.

If I were to offer one criticism, it would be for the solo variant. A solo game sees you as the Wardens facing off against randomly composed Grayking forces. Victory isn’t assured, but once the rules are clear in your mind it’s pretty easy to visualize the routes the enemy will come by in order to get to the Citadel, and either surround them at the city’s narrower passages or sidestep their forces to lock all four Barrier Gates for the win. It’s still playable, and still good for a game or two, but Sorrow of Salilth is considerably better enjoyed with someone else. So that’s our rating: excellent with two, and still pretty good on your own. Sort of like some other things you probably do alone, hm?

Don’t be gross. That’s not what I meant at all.

Posted on March 20, 2013, in Board Game and tagged Alone Time, Board Games, Print and Play, Shadows Upon Lassadar, Todd Sanders. Bookmark the permalink. 3 Comments.

← Kemet the  Jackal
Another Auto Shuffler Review with Dan and Steve →