Board Games & Me: Risk

Hi there, friendly reader. Today I’m inaugurating a short series about the games that instilled me with my current love of boardgaming, and about trying them again years later. Be warned that these aren’t necessarily the most interesting games, or even particularly good games — today’s article is about Risk, for instance, which is neither.

“So why talk about it then?” Good question! I have a good answer to go with it: Because Risk was the first game I ever longed to play. And when I finally did, it taught me something important about the power of board games.

Board games weren’t a real presence in my early childhood. Mostly I did a lot of reading, played Sega Genesis, and ran around the backyard in a cape. Sitting around for any stretch of time was dull, and the few times I played one at a friend’s house usually ended with some excuse to leave early (“Did you hear that? I think I hear my mom calling,” was a common one). The over-enthusiastic commercials with kids squealing about rolling dice and the colorful annual grandma-trips to Toys’R’Us did little to convince me either.

Even so, they weren’t totally absent. I was raised in a stable Mormon home, so every Monday night we gathered in the living room and did our darnedest to imitate this picture:

It’s called “Family Home Evening,” and I was never super jazzed about it — nobody in my family was, really. I even need to recant that “every Monday” bit, because we held it in spurts, bursts of enthusiasm quickly dissolved once we remembered that we already spent enough time together, thank you very much. We lived with each other.

When we did get around to having Family Home Evening, it usually ended with a game. This is where the bulk of my boardgaming experience came from — nuggets like Monopoly Junior, UNO, or the Game of Life. Real snoozer stuff. That’s what boardgames were to me: things you’d play when forced to do things you wouldn’t normally do with your family, as opposed to watching TV or just playing around together like normal human people. Board games were a duty, or a last resort for entertainment when camping in the rain.

Until one day, when my dad turned to my mom and said, “You think Dan’s old enough to play Risk?”

Naturally, that sealed it, especially when I learned just how much my mom hated Risk — so much that she would take lots of risks (oh ho!) to try to get knocked out of the game early and end up winning. So I begged to play Risk. I asked my dad incessantly for weeks. Finally, he relented. “You might think it’s boring,” he warned. 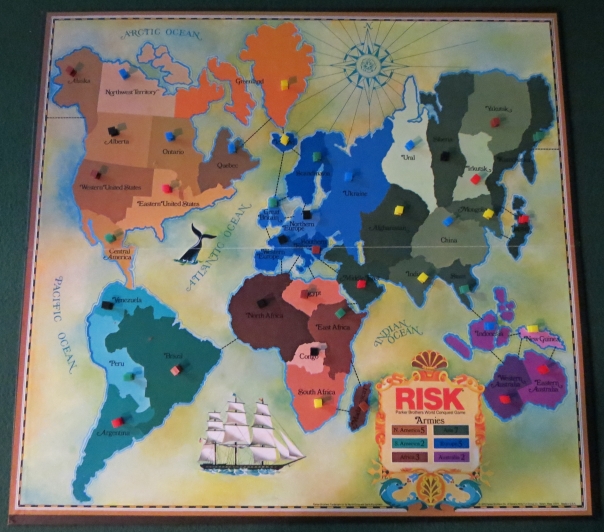 The elegantly simple board.

Dad was smart enough to not trust my kiddy promise, so he did everything possible to dress up our Risk Night. He invited over my uncle and his two sons, both of whom were a bit older than me and, thus, my heroes. We set up the game on an ottoman facing the television, and he popped in The Good, the Bad and the Ugly for us to watch while we played. I guess he figured that two things years beyond my comprehension would equal one thing compelling.

Of course, I didn’t get either. Risk was slow, and I didn’t conquer Australia, and my cousins were old enough to get the rules but not mature enough to be nice about me not getting them, and the abstraction of dice rolling was a bit too hazy for a kid who fought his battles with LEGOs and a video game console. Furthermore, why are the Ugly and the Good fighting each other? I thought they were friends? And can I trade in these cards for more armies? Why not? William did it!

But I loved it. I loved it so much. Because board games can do that, can be more than the sum of their parts — friends plus the game plus conversation equals something far more than just the same old people playing a bad game and telling dumb jokes. By some sort of magical calculus, it equals splendid memories. I remember that night down to the smallest detail, and I don’t even know what grade I was in. 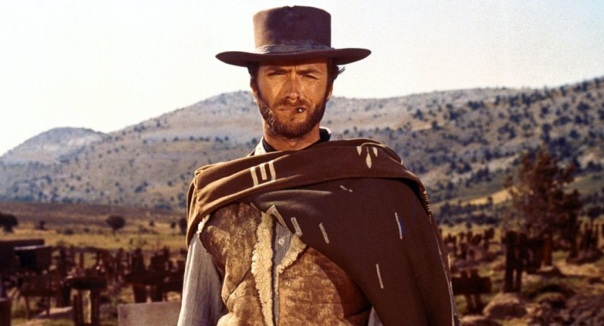 I didn’t remember the movie that accurately though.

I never played Risk again, at least for many years. The game itself wasn’t that memorable.

Flash forward to last week when my wife and I decided to sit down and try some of those older board games again.

The thing about Risk is that the early moments, when you’re trying to set up some sort of foothold while also punching your opponent’s toes out from under them — they take a couple spots in Europe so you stop building up in Australia to block them from achieving dominance there, then someone else takes Indonesia and damn it! — that part of the game is brilliant. You’re at war with everyone, everywhere, but you don’t have enough reinforcements to plug all the gaps, so it becomes a meticulous balancing act, placing just enough soldiers everywhere and then praying that the dice don’t screw you. Then screaming at each other when they do.

Setting up the game is half the fun.

Then the magic dissipates. Someone consolidates enough to transform into an unclimbable wall of armies that will end the game after an hour of inevitable depressing slogging, and then they insist you might have a chance and no we shouldn’t end the game early. But they’re just saying it because they want the immaculate pleasure of grinding your empire to gristle. Why I still encounter people who say that Risk is their favorite game is a total mystery to me. Like running into people who hate the Japanese for WW2, it just feels like such an artifact.

And once again, playing with Somerset, the game itself was humdrum. But I can remember the jokes we told each other, the fun we had at Risk’s expense. And that — that was good.

Thank you, Risk, for showing me that board games can be about more than just the game itself. Even a tedious game can make for a fun night, given the right company. Now let’s never speak again.

Next time I’ll talk about what happens when we mix in an actual fun game.

Posted on December 20, 2012, in Board Game, Retrospective and tagged Board Games, Hasbro, My Real Life, Risk. Bookmark the permalink. 14 Comments.