What Max Payne 3 Got Right

Max Payne, about to jump into action.

I doubt there’s any reason for me to jot this down—chances are you’ve already read everything you need or want to about Rockstar’s latest take on everyone’s favorite lugubrious detective. Still, I have a fond niche carved into my stony heart for Max Payne (the second ranks as one of my ten favorite games of all time), so although I suspect this will be superfluous, I’m just gonna write it anyway.

The first marketing for Max Payne 3 was dominated by two visual themes, indicators of a sea change for the series: chilly New York nights were replaced by shots of sunny Brazilian favelas, and Max’s wealth of hair was shaved bald. All the early announcements were plastered with these images. It seemed that rather than seducing fans of Remedy’s original games from noir to churrasco, Rockstar’s strategy was something closer to shock therapy. The response was a predictable upset: with so many modern takes on beloved properties resulting in derivative husks, many felt Rockstar was following suit and haphazardly discarding the spirit of the originals. Or running a coup.

I tend to be optimistic about games, including those re-imaginings of classics that almost never turn out right. “Give them the benefit of the doubt,” I think to myself. “Surely they know what they’re doing.” Even so, to see a fat and bald Max Payne wearing a parrot- and palm-patterned shirt and khakis, and battling bronze-tanned shirtless men in the sunshine, felt a bit like heresy. How could this be a continuation of the Max Payne I knew? I had beaten the second game over fifteen times, including no-painkillers (I ended up using four) and pistols-only playthroughs, so I had hoped for years that I would be given another opportunity to hear Max’s liquor-tanned tongue wax florid. But what on earth was this?

But here’s the thing: it works. The colors and dirt and population mingle into something profoundly lived-in. Interesting. Fresh. I suspect that if Rockstar had set MP3 in the same smoky bars and pooled-piss subways as the first games, it would have failed by sheer force of association. It would have been more of the same, sans the writers that breathed overwrought fun into the originals. The game does flash back to Max’s life prior to his trip south, locating him briefly in Hoboken (distinct from Max’s NYC stomping grounds in name only), and I’m glad they chose not to linger there. I loved those settings while they lasted, but a part of me has adopted NYC-fatigue, and the verve of the Brazil and Panama settings was a relief to return to. The game’s seventh chapter in particular, which follows an out-of-place Max’s first steps into the dilapidated favela, was possessed with a sense of place.

And thank heavens that Rockstar had the sense not to slip in a Samba cover of the cello theme from Max Payne 2.

Bullet time (I think I’m supposed to slap a © or ™ somewhere) has always been nested deep at the core of the Max Payne experience, so it’s a relief that Rockstar has polished it to a fine grain. Guiding Max through an atmosphere of molasses is as graceful as ever, with a few exceptions that I’ll bring up elsewhere. I’m a bit confused why the improved bullet time from the second game didn’t remain as a feature. In that game, the more enemies you eliminated while in bullet time, the slower time moved. There was a segment in the very first level of MP2 where you could wipe out nearly a dozen enemies in one frenzied, thrilling run; it was a delightful system, and I’m sad to see it go. At any rate, the dives are slower, and along with the change in setting, the new bullet time has a few different visual cues. Instead of everything turning sepia, as befit the noir setting of the second game, the screen is filled with the same type of film distortion seen in the gringo-goes-south genre (Man on Fire comes to mind). Among my favorite additions are Max’s ability to stay on the ground after shootdodging, rolling around and shooting to his heart’s content; and when fatally shot, he slowly falls to the ground, during which time you can get a desperate shot off at your killer to barely survive the encounter.

Max thinks about the carnage he has caused. It depresses him.

Hand-in-hand with the bullet time is the game’s animation system. The animation of the first two games was before its time, and it’s fitting that this should be the case with MP3 as well. A scene of children kicking around a soccer ball is breathtaking for the simple fact that they don’t look like ridiculous scarecrows on strings. When Max jumps into slow motion, he isn’t doing so with the gazelle-ankles of earlier games—he’s hurling his body into the air. Rather than sliding into walls or other obstacles after a shootdodge, Max slams into them with painful force. In one of my favorite moments, during a gunfight at a soccer stadium, I launched myself face-first down one of the tribune stairways. I expected Max to land at rest on his belly. Instead, my momentum followed through and Max continued hurtling down the stairs, catching every step with a wince and firing at enemy thugs the entire way. The Max Payne series has always operated on the premise that you can control your own action movie, and the visuals on display here are perfectly suited for the task.

Max hides behind a pillar.

Since bullet time is limited, the previous games often resulted in brief periods of respite in “cover,” though usually that meant awkwardly milling about behind some boxes or around a corner. This was especially the case in Max Payne 1, in which your bullet time didn’t recharge (so waiting around a corner to pick off enemies one by one was a common tactic), but it was problematic in both games. Max Payne 3’s added cover system, complete with blind-fire, fits well most of the time—it’s sometimes too easy to play the game as a cover-shooter, sticking to cover rather than making full use of the bullet time, but when used sparingly—to quickly reload or as a way to scramble up from a prone state—it’s brilliant. I’m not sure how I feel about conscious limitations as a metric of a system’s value—you really do need to avoid using it for too long—but I had a blast so long as I didn’t stick in cover too much. 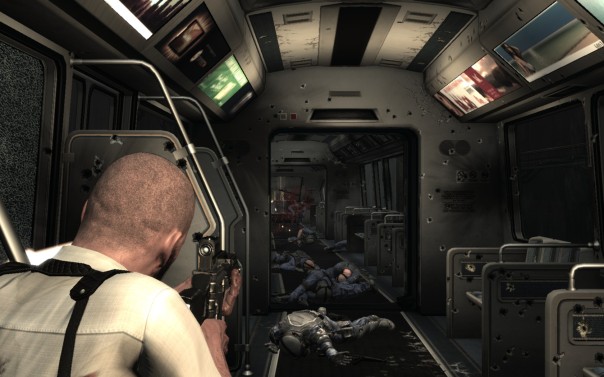 This is possibly the best improvement that Max Payne 3 makes over its predecessors.

Max Payne 2’s final act was a rhythmic counting game. One-two-three, I counted, over and over. That’s how many headshots it took from my M4 Carbine to drop one of those be-suited gentlemen that protected the final baddies. One-two-three as I dove through the air, firing straight into someone’s head, then a quick rotation and one-two-three. From the ground, one-two-three. Standing up and reloading behind a pillar, then out and one-two-three.

It was a bit silly. The enemies steadily grew in equipment, armor, and… face protection. No helmets, just… adamantium foreheads? Something.

Although enemies in Max Payne do eventually don some pretty authoritative bulletproof armor, and some wear helmets that can deflect a single round, most of the time the combat has a satisfying finality to its combat. A headshot will kill, and certain weapons—I’m thinking of you, auto 9mm pistol—are designed to absolutely shred your opposition.

Now, as I’ve said before, all of these things work to Max Payne 3’s benefit, when they work. When they work, they’re possibly the supreme example of cinematic shootdodging gunplay. But although I’ve been loving my time with Max Payne 3, it has some major problems. And I’ll be covering those tomorrow.