Pat the Hat Smells a Rat 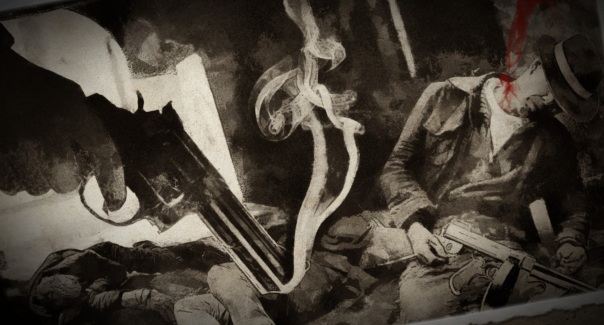 Originally, the plan was to write up a whole series on Omerta: City of Gangsters. Not a long one, maybe three or four entries, but a series nonetheless. But between Pat the Hat’s early misadventures and the few hours afterwards, I think it’s safe to say that Omerta well of surprises has run dry. Which means that the tale of what happened to Pat after his crew locked down Maine Avenue and started shooting for the bigtime — well, it’s also Pat’s last adventure.

END_OF_DOCUMENT_TOKEN_TO_BE_REPLACED

Pat the Hat Makes a Buck 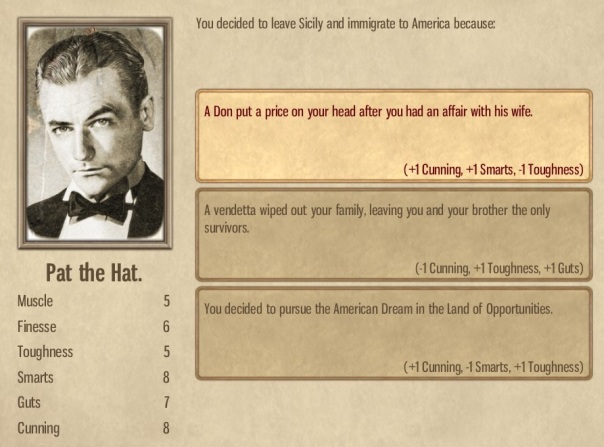 I’m an absolute sucker for anything gangster (and when I say that word, I mean prohibition-era organized crime, not “gangsta“), so despite middling reviews, I had little choice but to pick up Omerta: City of Gangsters. Because it had “Gangsters” in the title, you see. Anyway, that handsome devil up there is Pat the Hat. He has a period after his name because that’s how seriously he takes himself. He wasn’t always so austere — his childhood nickname was “Earful,” he had some trouble with loan-sharks as a young man, and he had an affair with a local Don’s wife and had to flee to America. As you might be able to tell, his youthful choices have made him slippery and brash, but not very imposing.

Now that he’s come to Atlantic City, he’s going to take all the advantages the Land of Opportunity has to offer, and wring them by the neck until he’s the biggest boss of them all. First step is scraping together a thousand bucks in dirty cash.