What do storybooks, Crossroads events, digital apps, worker placement, countdown timers, skill checks, and Mad Libs have in common? They all appear in Forgotten Waters by J. Arthur Ellis, Isaac Vega, and Mr. Bistro, the latest title from Plaid Hat Games! And although that might sound like the setup to a crack about how too many ingredients makes for one nasty porridge — especially after their last Crossroads game, Gen7, was such a bust — it turns out that Forgotten Waters is more than the sum of its parts.

We’re in a story!

How to sum up a game that exists on multiple planes? Even in multiple mediums once the app is included? Perhaps we’ll take a cue from board games and go in clockwise order.

Forgotten Waters is, as you already may have surmised, a hodgepodge. Within the span of any given five-minute window, it draws your attention in at least five directions. There’s the map, chunky with hexagons both known and unexplored, where your ship sails between islands, gets caught in storms, and dodges imperial vessels. There’s the storybook, where your standees are assigned, under the pressure of a forty-second timer, to tasks that will determine the outcome of everything from sailing across calm seas to battling krakens. The app, demanding your attention whenever it’s time to move onto something different, read a brief wall of text, or chuckle at a joke. Your own stuff, the treasure and abilities and character sheet that provide personal context to this miniature world. And lastly, strangely, perhaps unnecessarily, ship roles like cooper or first mate, a way of divvying up the responsibility of tracking your shared resources between players.

What makes this hum, let alone function at all, is that Forgotten Waters is mercifully restrained within each sphere. It would have been tempting to burden each system with sticks and carrots: wind direction and prowling enemies on the seas, additional triggers during worker placement, trackers that turn upon clockwork hinges. Instead, each system is barely enough to sustain itself. Moving is as simple as moving, flipping a tile, and typing its number into the app. Worker placement is timed, but so straightforward that the rules outright ask you to not read the resolution text in advance.

But by keeping everything bare bones, Forgotten Waters is able to drape its skeleton with enough padding and curtains to evoke something surprisingly rounded. It’s a trick of the eye, broomsticks and mop pails animated by strings and hamster wheels. Yet when glimpsed in whole, it’s a piratical ghost squeaking curses and rattling a saber.

Speaking more concretely — and reductively — Forgotten Waters is 90% skill checks so you can fill in boxes and circles in order to read some Mad Libs.

I loathe even writing it that way, although it’s true. At the outset of each scenario, you tear a sheet from a pad of pirates. Each of these sheets provides a grid of skills, a constellation, and some blanks to fill in, not only your name, but also tidbits from your past, the names of other pirates, or tidbits that don’t make any sense until later on. Maybe you’ll be Browneye McQueeg, grifter pirate, and be asked to write down a condiment or dessert (truffle butter), a smelly animal (sea lion), and a famous person (Captain Jack Rackham). Or Cornelia Cumbercunn, debater pirate, who attended a fancy university (Saint Titswallop Correspondence College) and has a female pirate friend (Sally Side Saddle). Or Roxy the Rumrunner, assassin pirate, who wields a cool weapon (scythe) and has a high number on her mind (5,324,072).

Why all this groundwork? Because it matters. For context, you’ll undertake a skill check roughly every four minutes. During a battle against a rival vessel, you might elect to man the cannons. So you increase your aim skill, roll a die, compare your modified number to the outcome of that check to perhaps inflict a broadside for massive damage or, if lady luck has shat upon ye from above, humiliate yourself and lose some piratical esteem. Either way, filling in that skill might also let you fill in one of the stars in your constellation. Fill in enough stars and you unlock a personal event. Now you get to read a tidbit of your pirate’s story, with blanks triggering the details you jotted down earlier. 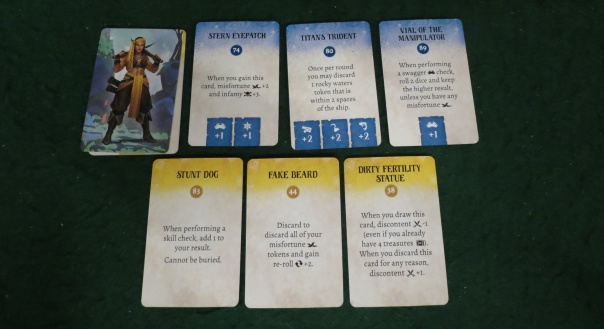 Unlike Dead of Winter or Gen7, the tone is lighthearted.

In other words, this is very much not a game for people who despise reading about their characters. I’m almost one of those people. Not out of principle, but because board game designers too often mistake their pre-written short stories for the emergent and mechanical narratives that board games excel at weaving. So it’s a testament to Forgotten Waters that many of these paragraphs left me tickled. Charmed, even. Where Dead of Winter was excessively grim and Gen7 was… I’m not sure what it was supposed to be, Forgotten Waters plays to the strengths of its authors by telling jokes, weaving madcap moments, and even breaking the fourth wall. One moment became an in-joke, the chant of “Little Gertie! Little Gertie!” calling out endearing dumbness. On more than one occasion, we laughed out loud. Silly voices were a must. When the app chimed for another stretch of story, I can’t claim we were always thrilled — stretches of text remained an unwelcome interruption — but more often than not we didn’t begrudge the intrusion.

Speaking of the app, I’m happy to report that we never encountered any bugs or got snagged on its interface, which is pretty much my criteria for not complaining about being shuttled into cyberspace every so often. The sheer quantity of text would have been a major pain to navigate had it all been crammed into a storybook, not to mention the astronomical shipping costs.

At its best, the app even transforms generic numbers into scenario-specific adventures. Depending on which scenario you’re playing, the same prompt will reference your current captain, the ongoing plight, that sort of thing. Encountering some choppy seas on tile 008, for example, can spark very different outcomes from one scenario to the next. It’s a nice trick, and it resolves one of those jarring issues with most adventure games where you’re exploring Miskatonic University to defeat Hastur except oh no now you’re fighting a zombie and oh look here’s an interdimensional hand-axe. The digital implementation transforms incidental and mismatched encounters into hand-crafted side stories in a coherent narrative. Slick.

And that isn’t the only thing that’s slick. Nearly every element in Forgotten Waters has been similarly tuned until it fits snugly in the broader whole. Treasure cards are useful, but even those that don’t complement your skills can be buried to check off additional stars in your constellation. Similarly, the need for loot offers up moments of tension between greed and the greater good. The absence of traitors means the stakes are never as dire as those in Dead of Winter, but they work well because you’re always striving to see the game’s story threads to their conclusion. The overall scenario goal is important, but so is your individual pirate’s story, and that only reaches its best resolutions as you complete your constellation. In other words, sometimes you’ll act selflessly for your crew, and other times you’ll be a selfish jerk who steals a crewmate’s favorite trinket and buries it for later. How utterly appropriate.

Meanwhile, it isn’t entirely possible to escape the sense that Forgotten Waters is a lot of pizzazz for some skill checks, but at least those checks are meaningful. Reroll tokens are precious. Misfortune tokens, which force you to roll two dice and take the lesser outcome, are appropriately despised. These little discs of cardboard take on meaning because battles are often desperate, chipping away at your hull, crew, and supplies, or throwing you into multi-stage boss fights that function like miniature puzzles. Placing your pirate in the storybook, glancing feverishly at the countdown, trying to work out a plan despite everyone’s mismatched skills and the pressures of time and a flagging ship — it’s adventurous. Exactly as it should be.

Even its structural approach to storytelling feels like Bistro, Ellis, and Vega somehow hacked into my diary. Rather than forcing me to sit through yet another legacy campaign, each scenario is self-contained, but also long enough that they’re broken into two acts. Upon completing the first act, we’re given the option of writing down some information and retire until a later session, or else soldiering into the second half. An entire tale, both of our misbegotten ship and our pirate, will be told in around four hours, not after two months of shackling the same begrudging group to the table.

Sailing the something seas.

Don’t get me wrong, Forgotten Waters isn’t necessarily innovative or brilliant. Rather, this is the craft of senior designers who know their knots and when to tack into the wind and how to patch some timbers when the hull has been splintered beneath the waterline. It takes disparate elements and plasters them into a gleaming mosaic: an app that incorporates fragments of story until they feel like chapters in a young adult novel, silliness and menace that riff on each other tonally, ship movement and worker placement and skill checks leveraged into story beats. None of those elements are perfect on their own. But together, their weaknesses are easy to overlook — and better, to revel in their charms. The metaphor of Forgotten Waters as a pirate crew seems too obvious. Instead I’ll just shout, “Little Gertie! Little Gertie!”

Posted on May 22, 2020, in Board Game and tagged Board Games, Forgotten Waters, Plaid Hat Games. Bookmark the permalink. 4 Comments.