← We Meet Again, Cabbagehead
Betray Me Twice, Shame On Me →

There’s nothing wrong with the idea that robots might one day enter the arena and wage battle for their own amusement; far better, at least, than them forcing us into the ring. In the distant future of Volt, it seems that our species has been shuffled offstage with the reverence usually reserved for a soggy box of yesterday’s banana peels. With no one left to conquer, the bots have turned their attentions inward. It’s only logical.

Instead, my issue with Volt is that I drew more enjoyment from the crafting of the above paragraph than any of my time spent in the game’s company.

Check out those sponsorship banners.

On its surface, Volt could be billed as Baby’s First Programmed Movement Game, undemanding fare in which you give your robots a few advance orders about where to trundle and shoot, then set them loose upon an arena of pit traps and pillars to witness how they fare. Yes, like RoboRally, but simpler, faster, and… well, simpler and faster.

At its core rest four dice, two blue and two red, like winking police lights of locomotion and hot laser death. From behind the privacy of your own personal screen, three of these doom-cubes are ensconced into your control panel. Finish quickly and you can grab the first player token; go slow and, hey, you get the idea. The moment everybody’s finished, they reveal their programs and begin the battle proper. Blue dice move your robot, with longer moves occurring later than shorter moves, while red dice project glittering c-beams across the field to sever mechanical limbs and eventually burn rival bots to charred silicone.

There’s more to it, especially in its advanced game, but we’ll return to that in a moment. For now, it’s important to note that Volt is already fumbling its fundamentals, starting with those red dice. You might assume that a red laser shoots later when it’s a higher number, just like a high blue die moves farther. And you’d be right! Well done. But then you might also infer that a low number doesn’t shoot quite as far as a high number. Again, exactly the way a low blue number doesn’t move as far as a high blue number. But this time, Volt throws up its best uncanny valley approximation of jazz hands and squawks “psych!” in the voice of Microsoft Sam. Because a level-one red die shoots all the way across the entire arena, every bit as damaging as a laser fired on the number six. The only difference is timing.

By being too permissive, the programming winds up feeling loosey-goosey.

Naturally, though, that timing is crucial. After all, it’s possible to miss your target entirely. When you shoot, your target may have already moved on. And Volt doesn’t like that. In fact, Volt, unlike many other programmed movement games, doesn’t revel in the prospect of you missing that shot. It wants your lasers to connect, to saw through tungsten, to melt down processors, to make slag of your enemies and slaves of their motherboards. It wants you to feel the buzz of success behind your hybrid biomechanical sternum, not the hollow despair of a whiff. Volt is a game about winning. Not about failure.

If anything, it’s as though designer Emerson Matsuuchi was irritated with the errors he kept making in RoboRally. The herky-jerky fumbling of its robots. The ready appearance of humiliating defeat. So he made his own entry in the Programmable Robots genre, and crafted its robo-warriors to spin on a dime.

The problem is that, in so doing, Volt misses the point of RoboRally, and more broadly, the point of the entire programmed movement genre. Rather than letting you fail — and worse, rather than letting hilarious infuriating failure be the norm — every move is handled with such easy precision that it barely feels like anything has been programmed at all. There will be moments where somebody shoves you into a pit, or connects with an unexpected laser burst. But these oversights are minor lapses in precognition rather than the product of truly clever play by an opponent.

Put another way, it’s too simple. Those dice exist to serve your whims, letting you move and fire with disappointing ease, and thereby robbing the game of any real stakes or inventiveness. It would have been better to restrict your selection of maneuvers in some way, whether by rolling the dice beforehand or programming with random cards or something. As it stands, Volt fails to understand that the principal joy of successfully executing a programmed maneuver isn’t derived from control, but from wrangling your robot into behaving despite a frustratingly narrow set of options. Limitation rather than freedom. Order derived from chaos. Pushing an enemy into a trap when you only had movement cards, or deftly sliding between foes, or landing an impossible shot. Or not! And laughing because, well, you can’t expect every program to run exactly according to spec. When you get right down to it, programmed movement is about comedic failure, not precision. 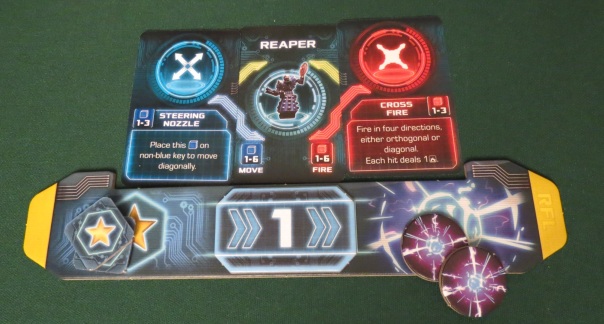 This is what they did with their sentience.

The advanced mode ameliorates this lack of excitement to some degree. Each robot receives upgrades that confer new abilities across three different categories. New movement options let you brake sooner, move diagonally, or even teleport to a new location, while attack abilities add mines, grenades, and other nasty tricks. The third category has the fewest options, stuff like detonation upon death and defensive shields.

These are a step in the right direction, although they aren’t enough to salvage the game’s superstructure. There’s more zaniness to contend with, especially once you zap an enemy only for them to explode in your face and kill you back. That’s all well and good. But when you get right down to it, the proceedings are still so deterministic, so devoid of feeling or excitement or the unexpected, that there’s scarcely any reason to play this over any number of superior titles.

Oh, and it’s better to commit suicide by chucking your injured robot into a hole rather than award someone a point for landing the killing shot on you. That’s just lame.

It’s easy to see where Volt came from. It’s programmed movement minus the capriciousness of a deck of movement cards, resulting in a game that’s almost completely about studying the state of the arena and trying to outguess your opponents. Unfortunately, the thrills and inherent comedy of the genre were lost in the process. Volt will get you squinting at the map. Laughing? Not so much.

Posted on February 19, 2019, in Board Game and tagged Board Games, HeidelBÄR Games, Volt. Bookmark the permalink. 9 Comments.

← We Meet Again, Cabbagehead
Betray Me Twice, Shame On Me →