Board games don’t stir up every emotion with equal ease, but they do succeed admirably at evoking paranoia. For that reason alone, John Carpenter’s 1982 flop — and subsequent retroactive hit — The Thing seems like the perfect fit for cardboardification. A bunch of dudes trapped in a remote location? A shape-shifting alien that imitates its prey? Betrayal, mistrust, and torching each other with flamethrowers? Yes indeed. The only remaining question is whether The Thing: Infection at Outpost 31 is the real deal or a twisted imitation masquerading in the flesh of its predecessors.

Well. Let’s talk about that. 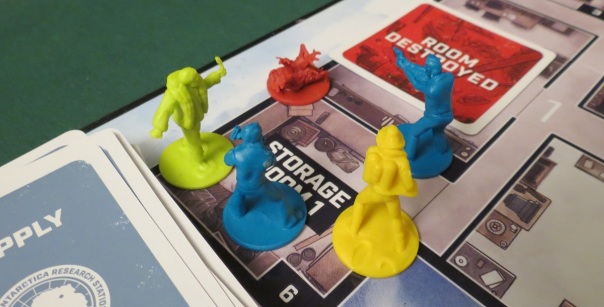 For anyone who’s played a social deduction game over the last few years, the basic formula of Infection at Outpost 31 is going to strike familiar chords. Players hit the ice as the staff of the aforementioned outpost, the scientists, support, and command crew that keep the operation running. Unfortunately, one of them has already been infected, with one or two more likely to join them in short order.

Each round revolves around a mission. The current player is the captain — as in, the guy who’s bellowing loudest at the moment — and must select a group to, I dunno, investigate why the toilet keeps running. Could it be that damnable thing jiggling the handle again? Each of these tasks requires both a certain number of crew and some specific combination of professions, which forces the captain to fiddle with his away team’s arrangement rather than just sticking to the same group whenever something goes bump in the night.

It’s heavily reminiscent of the team-picking portion of The Resistance, but the second half of each round steps into Battlestar Galactica territory. Once assembled, the team will march out into the base, rummage around, and maybe find some equipment to use or a Thing to bash. Both require the usual fuss for the genre — everyone tosses a card into a pool, the pool is shuffled, and the captain reveals whether the team passed the mission or tampered with it. There are some extra steps, like the captain’s ability to toss out a card in favor of something random from the draw pile, but for the most part it sticks to the time-tested dynamics of going on a mission that needs a bunch of flashlights and knives, and wondering who the hell contributed a petri dish or coil of wire. 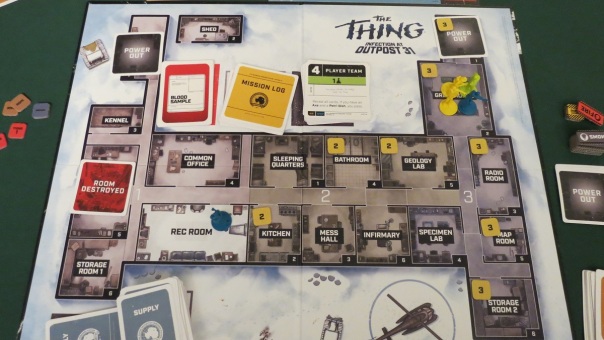 Cue the accusations, both well-founded and ridiculous. While each round is governed by a series of escalating objectives — find some rope, kill an underdeveloped Thing, secure a flamethrower, kill a bigger Thing — the overarching goal sticks in the back of the mind like shape-shifting goo to the ceiling. Every game comes down to a final test of loyalty, where a semi-functional act of democracy will elect a leader to conduct some last-minute blood tests and load a select group onto the escape helicopter. If everyone aboard is human, then the Earth doesn’t get taken over by viscous gunk.

The thing is, this final rush to the chopper has all the wiggle room of a clamped vise. In another move straight out of The Resistance and Secret Hitler, consecutive failures to elect a final leader will result in the spread of the contagion, which decreases how many blood tests will inform the captain’s escape roster. Every mission, every misplaced item card, and every delay are clues that inform this last decision, and it’s all aggravated by the near-certain knowledge that someone else has morphed into an additional Thing by the time it arrives. The result is a delicious tension between getting out now and sticking around a little while longer to maybe suss out who the Things are — and maybe torch the bastards with a flamethrower.

I can see the sparkle in your eyes from here, so okay, I’ll talk about the flamethrower. In one of its boldest moves, this game features a handful of special items that bend the rules. The least interesting is dynamite, which merely manipulates your rolls in battles, but ropes let you temporarily tie up players to leave them out of a mission, while flamethrowers can either force an emergency blood test or scour someone from the game entirely. Player elimination is often given a bad rap, but here it comes so late in the game that it’s unlikely to leave anybody sitting around for long. And anyway, you can burn one of your friends out of existence. The only thing more satisfying than torching an imitation is being a Thing and suppressing a chuckle when somebody burns an innocent human player.

If this were the end of the review, Infection at Outpost 31 would have handily secured my admiration. It captures the identity horror of The Thing with admirable deftness, and its time-to-accusations ratio is approximately forty seconds. The way it builds to a final escape that determines the fate of everything that came before is even an improvement over many of its genre predecessors, and is certainly more interesting than the usual nickle-and-diming-to-death that so many of these games endure, where your spaceship or moon station or zombie colony or whatever is constantly slipping into disrepair. This game includes a bit of that, with rooms burning to cinders if not properly attended and the contagion eventually growing beyond control, but those behave more like calls to action than legitimate threats in their own right.

However, there’s a patch of ice that sends Infection at Outpost 31 sprawling right onto its face, and it’s slippery enough to temper my enthusiasm somewhat.

As you might expect, much of your success — whether as a human or an imitation — comes down to the cards you can play on a mission. If the team needs guns, hopefully you’re holding a gun to contribute. Same goes for fire extinguishers, axes, and even sometimes the junk you scavenge. And if you’re a baddie, well-timed sabotage cards can spread suspicion, not to mention wrecking a mission or battle at an inopportune moment.

The problem is one of economy. In Battlestar Galactica, Dark Moon, or Dead of Winter — all of which featured resources tossed into shared pools for resolving crises — one of the main concerns chewing at the back of your thoughts was always whether you had enough resources to handle a problem. Your stock of resources grew and diminished over the course of multiple turns, and it was equally possible to over- or under-commit to any given problem.

By contrast, here everybody refills their hand at the conclusion of each mission, and this unusual generosity drowns the game’s tension beneath a tidal wave of resources. It’s a subtle but significant problem, throwing the proceedings out of whack once everyone realizes that they’ll only rarely be forced to toss an undesirable card into a mission pool. When nearly every sabotage guarantees the presence of an imitator on an away team, a Thing player might as well lie low, help resolve their assigned mission as stalwartly as possible, and gamble on stowing away aboard the helicopter.

In short, Infection at Outpost 31’s unwillingness to squeeze its players robs its antagonists of their most interesting options and turns the ticking clock of the final boarding call from time bomb to capricious dud.

Infection at Outpost 31 isn’t entirely scuttled by this misstep, but it only barely keeps its head above water. A healthy portion of its paranoia remains intact, especially as you edge closer to that do-or-die moment when one side or the other will prevail. It’s probably good enough that it will provide fans of Carpenter’s The Thing with some positive memories, at least if they’re able to ignore the absence of movie stills in favor of sketches that are a great deal further from Kurt Russell than any imitation molded by the Thing.

But for those of us who like our Cylons salty and our resource economy tighter than our belts, Infection at Outpost 31 is as much a half-measure as locking Blair in the tool shed and hoping he doesn’t get turned into a Thing while we’re busy elsewhere.

Posted on November 13, 2017, in Board Game and tagged Board Games, Mondo, Project Raygun, The Thing: Infection at Outpost 31. Bookmark the permalink. 13 Comments.