← Together Is Better
Faraway Convergence →

An Offer You Can Refuse

It’s unquestionably difficult to consider Eric Lang’s latest, The Godfather: Corleone’s Empire, without referring back to its source material. Nearly impossible, in fact. Here’s a game, lavishly produced, provided access to one of the most widely-discussed artifacts of culture, a film that boasts nearly one hundred percent cultural penetration. It’s a serviceable game, riffing on the worker placement and area control that have become standards of the hobby. Yet when it comes to its source material, it’s almost afraid to engage. It skirts the edges, providing Don Corleone and severed horse-head miniatures and naming rounds after the “acts” of The Godfather. Here’s Connie’s wedding. Now poor Sonny has been gunned down at that iconic tollbooth. Watch out, Michael is out for revenge. What do these have to do with the pawns placed across New York, the bad booze and dirty dollars exchanged to complete jobs, or the Altoids-tin suitcases of banked cash?

But let’s set aside the sticky issue of game licensing for the time being. Don’t worry, we’ll get back to it.

Corleone’s Empire is a worker placement game first and foremost. As the don of one of The Godfather‘s B-list crime families — no Corleones or Barzinis welcome — your ranks are filled with two very different statures of worker: capos and thugs. There’s some similarity there, as both help seize control of New York’s various neighborhoods and tumble headfirst into the Hudson River when cranially violated by a nine-millimeter lump of lead. In practice, though, capos and thugs behave very differently. And it has everything to do with the businesses spread across the city.

Every business functions in two different ways, whether a humble pawn shop or a Korean laundromat that over-starches both trousers and blood money. There’s the “front end,” the place where you walk in through the door to buy goods. Or, more accurately, to demand goods in exchange for protection. That’s the domain of your thugs. Walk in, wave a gun around, grunt out some threats, and get paid to leave the proprietors alone. All in a day’s work.

But there’s also the “back end,” representing the under-the-table stuff. Skimmed shipments, backroom deals, that sort of thing. This is where capos earn their moment in the shadows. Not only are capos added to the intersections between neighborhoods, adding their strength to everything they touch, but they also skim from every single business located in those neighborhoods. Back ends tend to be a tad weaker than what you shake down from the front, but you’re casting a wide net and hauling in volume. Better yet, since these are conversations behind closed doors, the local dons won’t see a dime.

The big man’s on the payroll.

There’s some artistry to managing these two types of workers. Thugs tend to represent a precise claim on a neighborhood or act as tiebreakers, while a capo’s long reach is the hand that keeps the marionette dancing. Little by little, each round’s real estate constricts as businesses and turfs are occupied, divvied up, and eventually controlled outright.

A handful of relatively slender ideas add some sugar to Clemenza’s meatballs and make all this worker placement stuff a bit more interesting. The first is that controlling neighborhoods does actually make some difference. Sure, they’re worth points at the end, but they also mean that an opposing don’s thug landing on one of your businesses will let you wet your beak as well. This often serves more as a disincentive than a real opportunity, shouldering your rivals away from your neighborhoods for fear of benefiting you with each placed thug, but every so often you can make bank because you’re the only made man with access to a particular resource.

Speaking of resources, the whole purpose of those dirty dollars, bad boozes, gangster guns, and wildcard narcotics is to swap them in to complete jobs. There’s money to be earned, naturally, but even better every job lets you mess with the state of the game in not-so-slight ways. Thugs and capos can be reused, enemy pieces are tossed into the Hudson, and someone’s carefully-banked money can be robbed from their suitcase — which is an enormous pain in the rear when you consider that only your banked money is worth anything at the end of the game. It’s hard to overstate just how crucial a well-timed job can be. A car bomb, for instance, can kill every enemy piece in a single neighborhood. With tools like that, there’s an extra layer of planning to consider, whether by waiting for a cluster of rivals or ensuring you lay low until just the right moment.

Then there are the allies you can bribe into your service. Everybody gets a bid using only the cash in their suitcase — you’re wagering points, essentially — but these friends of the family are often worth the asking price. Some give you little perks like a wallet full of money or letting you bank something at the moment of your choosing, while others add new figures to the board. Just like that, you’ve got the police chief gunning down your enemies or the mayor taking control of a neighborhood outright. There’s a whiff of Lang’s own Blood Rage about them, letting you opportunistically bend the rules, but they lack the wet-and-wild appeal of that game’s world-ending monstrosities or new scoring opportunities. 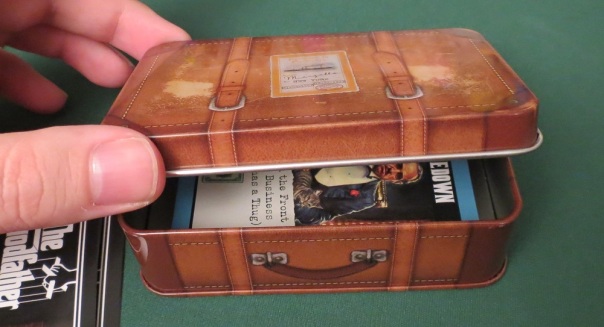 In a way, that same observation goes for much of Corleone’s Empire. As in Blood Rage, there are definitely some clever things going on here. It’s nice to see a worker placement game that isn’t Argent: The Consortium taking advantage of multiple worker types, and there’s a pleasant tension between placing your guys in the locations that will earn you the right resources, jobs, and opportunities, or in the spots that will win you neighborhoods. Also, since your participation in a round only ends once you’ve played your last piece, it’s important to consider the timing of your jobs and allies as a prolonging measure, letting you observe a developing situation before committing that final capo.

That said, it feels peculiarly staggered at times, the dynamism and feuds of Blood Rage taking a back seat to an oddly hands-off approach to conflict. Without the benefit of a particular job and the right tools to accomplish it, turf wars are more about adding up your capos and thugs at the end of the round and less about making a move or slugging it out. Tossing dead enemies into the river feels dandy, but it has hardly anything to do with a grand scheme coming together.

More than that, Corleone’s Empire seems caught between its zanier impulses and the solemnity of its source material. The ally cards provide the game’s most interesting opportunities but will only enter your hand two or three times, and for each police chief or mayor there’s a dullard hired muscle or tax advisor hanging around. Clashes are loud and brash and raise all manner of hell, but are so infuriatingly limited that it seems the game is determined to please neither those who relish conflict nor those who despise it.

One more reason you shouldn’t swim in the Hudson.

This brings us back to the question of The Godfather‘s role in all of this, because Corleone’s Empire simply never bothers to evoke anything particularly godfatherly. Without more flexibility, there’s no real sense of springing a takeover or seeking revenge. Without diplomacy or table-talk, there are no promises to break or loyalties to betray. And there certainly isn’t any tension between the dream of heading a legitimate business weighed against the need to protect what’s yours. Stripped of its license, fancy sculpts, and artwork, one wonders whether Corleone’s Empire would raise any eyebrows at all.

That’s not an entirely fair assessment, of course, and for some folks it simply won’t matter how Corleone’s Empire pitches itself. On its own, it’s a perfectly serviceable worker placement game, even if it lacks the bombast or innovation of some of the genre’s other titles. It’s pretty, polished, and doesn’t waste your time. But for fans of telling workers where to place themselves, this one’s more gun than cannoli.

Posted on August 14, 2017, in Board Game and tagged Board Games, Cool Mini Or Not, Spaghetti Western Games, The Fruits of Kickstarter, The Godfather: Corleone's Empire. Bookmark the permalink. 2 Comments.

← Together Is Better
Faraway Convergence →