← Evolution Evolved
Is That an Imperium in Your Pocket? →

There comes a moment in all our lives when we must kick and throw and taunt and launch fireballs, to say nothing of the possibility of launching an electric uppercut. For many of us, that moment goes by the name

and pretty much centers around either standing in an unbearably long line or passing the time at a crummy restaurant. 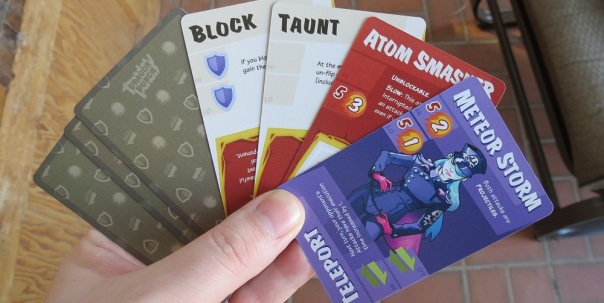 Prepare to have your dragons punched!

Settle in, kick off your sneakers, grab a seat right there on the divan, and I’ll explain how

works. Or perhaps it would be better to just show you how the game was advertised in the mid-’90s.

The rough outline is simple enough to explain. Both players are cast as renowned fighters, and circumstances have contrived to place you here, in this moment, standing across from your nemesis. Don’t ask how, don’t ask why. Just make ready to fight.

Each one of you is given a hand of cards that shows an array of martial arts moves. Six of these are the same for both of you, while the seventh is unique to your character. At precisely the same time, both of you will look through your options and decide which move you’ll perform that turn. Then, both at once, you reveal your move and hope for the best. And just like that, you’re playing

Those are the rules, but they don’t entirely convey what makes this little fighting game such a good time. First of all, used moves are spent and flipped around to face your sparring partner. This way, your ability to outguess your opponent’s next move grows as your own options run out. After a few rounds, it isn’t uncommon to be stuck with moves like the pitiful LOW POKE, leading to a turn where you might consider TAUNT to flip all your moves back into use. The downside is that TAUNT leaves you open to a brutal shellacking, so clever timing is the order of the day.

Next, not all of your cards resolve at the same speed, and it’s usually the slow ones that really let you wind up to deliver a good smacking. Thus, most moves present a chance to either deliver a shattering blow — which flips your opponent’s cards upside-down, whittling away her stamina but also giving her adrenaline-fueled super-moves — or to dart in for a quick jab that will leave her unable to complete her own attack. There are also ways to dodge high or low attacks, get a chuckle out of watching two fireballs blast into each other, or just block entirely. Though be wary of that last one, because certain moves like THROW will undermine even the most carefully timed block. It’s a bit like the BattleCON games, a constant guessing match where your options generally fluctuate between speed and power.

Check out my sah-weet wallet. Placed alongside a flower for size reference.

It’s also a bit like Oddball Aeronauts in the sense that it’s a tiny game, easily portable in a back pocket or shoulder holster, and doesn’t require any surface to play. This makes it perfect for whiling away any time spent waiting in a convention line, ignoring the commercials those corporate bastards force you to watch before movies in the theater, or passing the time as Geoff takes fifteen-minute turns in the other game you’re playing.

is one of the best portable games out there. It crams a tense duel of wits into literally about five minutes, comes in a middle schooler’s so-cool plastic wallet, and it’s simple enough that you could explain the rules in about forty seconds if you didn’t take a breath. It isn’t going to be a game night’s main attraction, but it’s perfect for those of us who find ourselves burdened with a surplus of waiting around.

Posted on February 9, 2016, in Board Game and tagged Board Games, Dragon Punch, Level 99 Games, Most Mondays, The Fruits of Kickstarter. Bookmark the permalink. 5 Comments.

← Evolution Evolved
Is That an Imperium in Your Pocket? →