← Hold Your Breath and Count to Ten
Keep Away →

One of the things that always stands out about John Clowdus’s designs is just how much gameplay he packs into a tiny package. As it should be — after all, his guiding principle is written right into the name of his company, a manifesto laid bare for all to see. These may be Small Box Games, but that doesn’t mean they should be inconsequential.

And for the most part, Hordes of Grimoor makes good on that tradition.

As with most of John Clowdus’s games, cards have multiple uses.

With Hordes of Grimoor — hereafter abbreviated as HoG because I think it sounds funny — John Clowdus is up to a few of his usual tricks. Which might sound like a bad thing if he weren’t such a steady hand at them. The story itself is all but invisible: there’s You and there’s Them, and You want to beat Them. That’s all there is to it. The gameplay, on the other hand, is as uniquely crisp as we’ve come to expect from Small Box Games. Principally, winning at HoG would be an easy task if it weren’t for the fact that every card has multiple uses. Four, in this case. No, wait. Five.

First of all, since each card shows a brawny monster, whether a fish-creature, skeleton-creature, or Iron Man-creature, you might as well send them to war. These are your “cohorts,” and they assemble into the titular hordes, the guys who mass together to win each of the game’s three conflicts. Each cohort has their own strength rating, and when the round is finally brought crashing to a close, whichever player is sporting the highest strength will win the conflict and a plot of land. Since territories earn points both immediately and perhaps later on by being built into strongholds, staffing your horde with solid fighters is one of your highest priorities.

On the other hand, each cohort also boasts an ability of some sort. These range from the usual fare — drawing cards, playing another cohort — to outright devastating, like the ability to clean house on the opposing horde, duplicate any dead cohort’s ability, or recruit straight from your opponent’s ranks. The trick is that the best abilities usually require some sort of sacrifice, either discarding cards from your hand or, more often, “focusing” a cohort, which is HoG’s way of letting you say that you “tap” the card without the entire legal team of Wizards of the Coast breaching your front door with assault weapons a-blazing. Unfortunately, a focused cohort’s strength is reduced to a single measly point, meaning they aren’t all that useful… at least until you figure out a way to stand them back up or use a different cohort to transform all your tired guys into killers in their own right.

And those are just the two main ways to use your cards. Want to grow a territory into a stronghold? I guarantee you will, since a stronghold is worth three times as many points as a territory. Then spend cohorts! Need to win the hefty sum of bonus points for having the strongest domain? Then send cohorts to the ongoing side-battle that doesn’t wrap up until the end of the game! Want to empower your special curio cards for their powerful actions and extra points? Take a wild guess. I’ll give you a hint: it has the words use and cohorts in it.

The point is, all paths to victory are paved with the brittle bones of your followers. This forces you to make clever use of your hand at every turn, stockpiling cards that trigger one another’s abilities and keeping an eye on your enemy’s plans. It’s more than a little reminiscent of Clowdus’s magnum opus, the tremendous and unrelentingly brutal Omen: A Reign of War, but in miniature and set to fast-forward. Every deployed card and spent action matters. 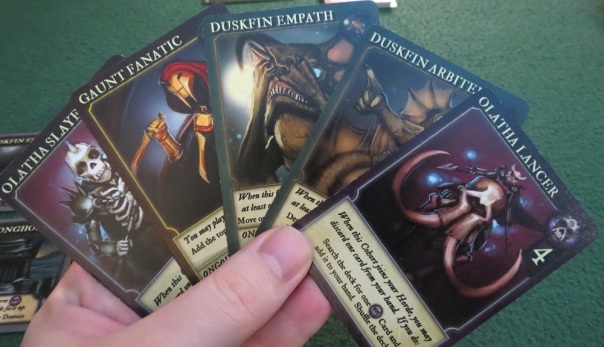 This isn’t to say that HoG ever completely measures up to its older brother. For one thing, the central conflict often feels flimsy compared to all your other options, giving both players ample time to set up strongholds, empower curios, and stack cohorts prior to the climactic battle. Lacking is the metal-on-bone crunch that defined Omen. Where every one of that game’s soldiers, beasts, and oracles felt like an individual, from their sublime artwork to their rule-trembling powers, the ugly beasties of Grimoor feel more like faceless hordes. Fitting, though also a slight letdown.

Even so, Hordes of Grimoor stands out as another minor success for John Clowdus, a game that, like its box, packs a whole lot of oomph into a trim quarter hour. As a quick game for two players, you could do a lot worse than sending a bunch of fishmen yowling to their deaths.

Posted on February 4, 2016, in Board Game and tagged Board Games, Hordes of Grimoor, Small Box Games, The Fruits of Kickstarter. Bookmark the permalink. Leave a comment.

← Hold Your Breath and Count to Ten
Keep Away →