According to the Surgeon General, spoilers can be bad for you, and may cause mood swings, irrationality, sleepless nights, and “getting bent out of shape.” Soon after issuing this warning, the Surgeon General fired her undersecretary for putting such a frivolous motion across her desk. Personally, we think the Surgeon General can stuff it, so what follows is part three of our series to demystify everything about Pandemic Legacy. Our only warning is to take care that you’re caught up on part one and part two before reading further!

EVEN SO, BE WARNED THAT THERE ARE MANY SPOILERS HERE. PARTAKE AT YOUR OWN RISK. SPACE-BIFF! WILL NOT REIMBURSE YOU FOR HURT FEELINGS OR BENT-OUT-OF-SHAPENESS. 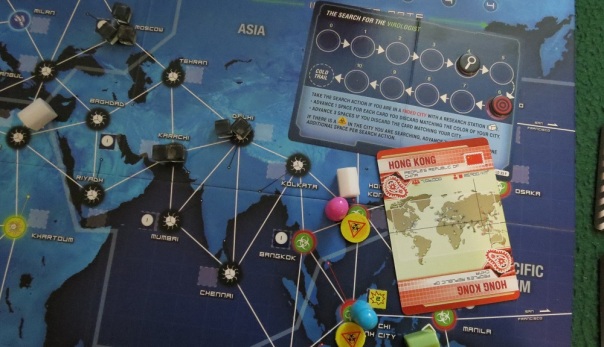 Searching Hong Kong for the virologist.

Considering how the C0dA virus has now transformed Southeast Asia into a scene straight out of a zombie holocaust film — though the CDC in Atlanta is very firm in their insistence that the Faded “are neither undead nor of the fast zombie variety” — it only makes sense that we should finally hire a virologist to maybe look at the actual genetic structure of the thing. Y’know, to make a vaccine. Because in this zany reality, as in television and most of popular culture, a vaccine is sort of like a magic wand that whiz-bangs away our problems while remaining vaguely sciency.

Thus a new action is introduced for our heroes. In addition to jetting around the world, treating the symptoms of infection, communicating with their fellows as deliberately as possible, manufacturing cures, overseeing the construction of research centers, military bases, quarantines, and roadblocks, and assembling their own equipment, our plucky doctors are now also tasked with personally going door to door in dangerous zombie-infested cities in order to secure valuable potential hires. And all because everybody suddenly decided that it was unethical to not pay the interns.

And thus is our team assembled. Rocky the Medic and Jackie Tan the Dispatcher are no-brainers (our sincerest apologies for that pun to all victims of not-zombie brain consumption), and their task is to keep every disease that isn’t C0dA in check. Afrojack the Quarantine Specialist comes along to help stem outbreaks wherever they may occur, while Stallone, who is both a very manly Soldier and the newest member of our team, will march straight into Faded territory to find this virologist. It also helps that having the city quarantined will make the search easier.

All in all, the month passes without too much trouble. There’s a panic in Santiago and an outbreak in Khartoum that spreads through Riyadh before we manage to contain it, and Stallone turns out to be about as useful as a handsome rock, but the rest of our people manage to locate the virologist. She seems nice enough, joins our team and all that. More importantly, she begins work on C0dA’s gene sequence, scratching the first item off our grocery list to beating this thing. As always, it takes us a while to decide how to best combat these diseases in the future, but we settle on blocking access to the now-infected San Francisco with roadblocks. Afrojack also insists on one of the best upgrades we’ve ever seen — a paramilitary escort that will wipe out some of the Faded whenever she leaves a city infested with the things. It seems almost too powerful.

Now that the CDC knows we’re halfway competent at searching through derelict blocks of housing, it seems we’ll be assigned a similar task every month. This time we’re hoping to find an immunologist, just one more fellow we unfairly assumed the CDC would have already employed. Meanwhile, our bosses also inform us that we will no longer be tasked with eradicating diseases. There goes our easiest objective.

This time, the target of our search has gone into hiding in a city that’s both infected with C0dA and rioting. Which seems to indicate that he can’t be nearly as smart as the guys back at headquarters are telling us, but hey, we have our orders, even if they’re starting to smell as stale as a month-old Faded.

Sadly, the team Medic — our stalwart, our prince, our Rocky — is caught in Laos during a particularly nasty outbreak. He reports that the experience has made him “indecisive,” which apparently just means he refuses to oversee any roadblocks. Since we’ve never had him do that job anyway, we send him back to treating diseases. There’s a second outbreak, this time in Essen, and the eggheads down in R&D basically flip out about it for some reason. No idea why.

It isn’t long before we recover the immunologist. He’s gone a bit batty from living in a burning Ho Chi Minh City, but he rambles something about how C0dA was artificially manufactured. We just slap him on the back and get back to our jobs. 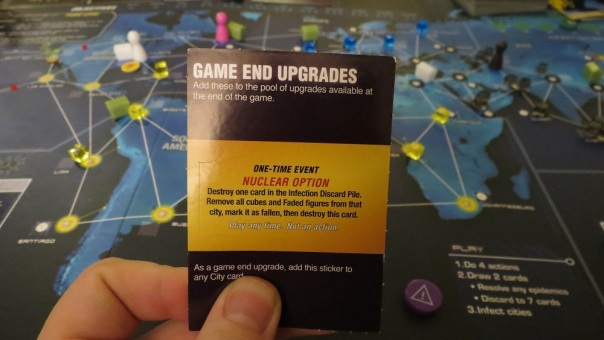 With the situation stabilized for the month, it’s time to evaluate our long-term solutions. We give Rocky two years’ worth of talk therapy in a week, making him “determined” and able to take another beating in the event he gets hurt again. We also set up another one of those military bases, this time in Bogota. Oh, and the CDC starts talking about nuclear options. No worries, we figure. After all, what’s wrong with an option? 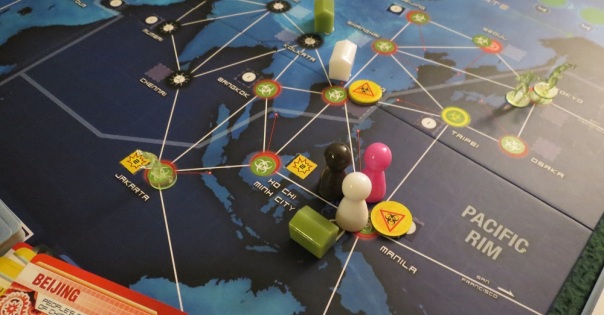 Searching Manila for some crazy dude. Not a problem.

Remember when Afrojack insisted on that paramilitary escort back in July?

We’ve been in a holding pattern for a while now. We stem the tide of these diseases, blow up a few Faded, search some busted-up city, pick up a new teammate. Rinse with hot water, lather with chlorhexidine soap, repeat.

This month is more of the same, with the exception that our task seems dumber than ever. Instead of going straight into hell’s mouth to find a virologist or immunologist — someone qualified — this time we’re supposed to hunt down some ex-soldier from the CDC who went insane. Reports of paranoia, dissociative disorders, the works. Worse, the nutcase is hiding out in another C0dA-riddled city. Manila this time, somewhere near the paramilitary base he apparently disappeared from.

So we suit up. We’ve got Afrojack again, Jackie Tan, Rocky. Hootie Pants, the Researcher and Afrojack’s half-sister, is also coming along for the ride.

In the end, all it takes is a couple pairs of binoculars to find the soldier. He’s raving about some sort of conspiracy within the CDC, manufactured diseases, medical experiments, a paramilitary cabal bent on destabilizing the world’s regimes and taking their place. At first we ignore him.

Then he shows us the proof. 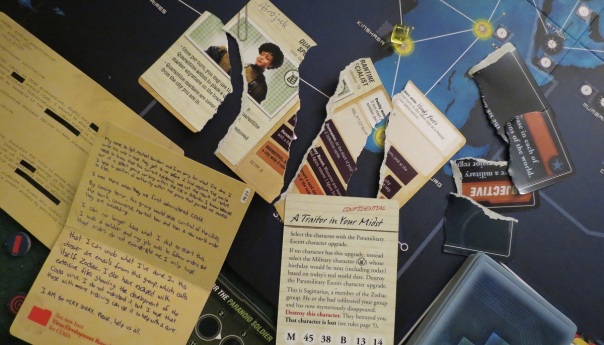 The guy might be a nutcase, but that doesn’t make him wrong. Especially when he’s got internal emails, a signed confession, everything. Worst of all, it turns out that Afrojack — our coworker, friend, and Hootie Pants’ half-sister… well, she requested that paramilitary escort for a reason. She’s been the cabal’s woman on the inside this whole time. Everything that’s happened, from all the training we’ve invested in her to that time she got injured in Hong Kong, has all been part of her cover. When we try to confront her, she and her paramilitary goons peel out and we’re left choking on exhaust.

With one of our best operatives gone, it’s time to reassess our goals. We’ve been setting up these paramilitary bases all over the world. No wonder the bosses in Atlanta kept ordering us to build one on every continent. The only thing to do now is to undo our job. It would be easier if we weren’t the only ones standing between C0dA and the rest of the world. From now on, we’ll have to pull double duty, fighting both the paramilitary cabal and the spread of these manufactured diseases.

Only fitting that we start with Manila. 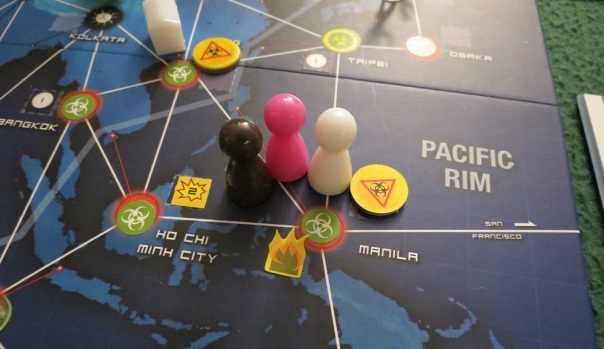 We’re a team of the world’s best scientific minds, so it’s about as easy as boiling an egg to whip up some C4. Hours later, the paramilitary base in Manila is blazing at around 1800 degrees Celsius. A short time and a quick jaunt across Southeast Asia, and so is the base outside Kolkata.

In our moment of need, up steps Stallone. We weren’t too sure of him before, especially when he was dundering around Africa. But now it turns out that he’s got a shady background and multiple identities, giving him easier access to the paramilitary bases. And he’s pissed about this whole take-over-the-world thing.

He flexes at us for a good half hour. We’re pretty sure we can trust him.

Posted on January 25, 2016, in Board Game, Game Diary and tagged Board Games, Pandemic Legacy, Z-Man Games. Bookmark the permalink. Leave a comment.