← The Dice Must Flow
Posthummus →

Our modern sensibilities may protest all they like, but it’s a fact of human nature that we as a species absolutely love the prospect of racing headlong into the unknown, finding people dissimilar to ourselves, and swiping all their stuff. And Empires: Age of Discovery, the spiritual reincarnation (and license sidestep) of Glen Drover’s 2007 board game Age of Empires III: The Age of Discovery, understands this fact deep down in the pit of its belly.

The first tentative steps into a New World.

And whenever I say “belly,” I can’t help but refer to the girth of Age of Discovery’s box. This thing is one strapping beast, heavy and imposing like a sumo wrestler. Nearly as meaty too. The game inside might have been contained in something less gargantuan, but this “deluxe edition” — note that there’s no such thing as a regular edition here — is as much a statement as it is a celebration of its own production values. This is sweeping subject matter, the ransacking of two entire continents and the birth of entirely new nations, and Age of Discovery desperately wants you to catch the infectious, adventurous spirit of the endeavor.

Since there’s hardly any difference between the 2007 Age of Discovery and the 2015 revitalization other than some new art and the retiring of the Age of Empires license, this might be misconstrued as a throwback worker placement game in the least ambiguous sense of the phrase. Taking on the mantle of an old European power, you start with a handful of brave settlers, and you’ll assign them to, well, a whole bunch of things. There’s the spot for earning initiative in future rounds, the spot for building permanent powers, the spot for transforming your settlers into more specialized workers, and so on. A quick skim of the rules makes the whole thing seem a bit pedestrian — and entirely misses what makes it so special.

First of all, at the heart of Age of Discovery’s gameplay is the bitter race of Old World nations to carve up the Americas before there’s nothing left to grab. Every settler, every spent doubloon, every decision is therefore made under steam-hot pressure. Want to nab the best buildings, the ones that will give you free specialists or let you bend the rules for the rest of the game? Then you might miss out on the premier spots on the colony ships. Want to bully the market and complete your monopoly on sugar? Then good luck having enough people left over to explore the New World and get the first shot at plundering its riches. There are always too many things to do and too little manpower to accomplish everything at once. It isn’t uncommon for the first couple rounds to be punctuated by dissatisfied grunts as settlers begin to occupy the various slots on the board. 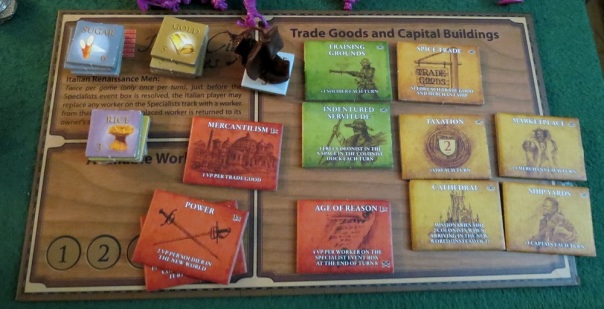 Powerful empires are determined by whichever grabs the most stuff that didn’t belong to them.

Beyond pitching colonialism as a constant race against competing empires, Age of Discovery is also a gem of hybrid design. Sending colonists to the New World transforms the game into one of area control. Whoever first sets up a “colony” of three settlers claims a region’s resource, and the conclusion of each age also rewards dominant colonies with heaps of victory points. Certain specialized workers, notably the Missionary’s ability to place double settlers when he arrives in the New World or the Soldier’s tendency to fight battles that wipe out opposing settlers, can aid in establishing supremacy over various colonies, while Builders increase their value and Merchants pull in a tidy sum of coins. You might be a big shot back home, but without a few bustling colonies, your chances of pulling ahead are basically nil.

But we’re getting ahead of ourselves. As the scene opens, only the Caribbean has been discovered, forcing you to send explorers to reveal new lands. This is a dangerous proposition, made easier by employing Captains and Soldiers, but rarely a guaranteed thing. A successful expedition will offer a head start to whichever player discovered a territory, but might also spell the loss of the entire party if they’re overwhelmed by the locals. And of course, anyone you send fortune-seeking isn’t setting up a colony or bringing home trade goods.

Speaking of trade goods, commodities like sugar and gold and fur are essential to the running of a global empire. Their management is as simple as it gets: by accumulating sets, you earn extra cash at the end of each round. The problem is that sets can be tough to come by, either grown by having the first colony in a region or by sending workers to nab them from the board. As always, cutthroat players will find plenty of opportunities to steal away precious matches before their opponents can lay their hands on them, adding one more dimension of frustration to your plans of domination throughout the Americas. 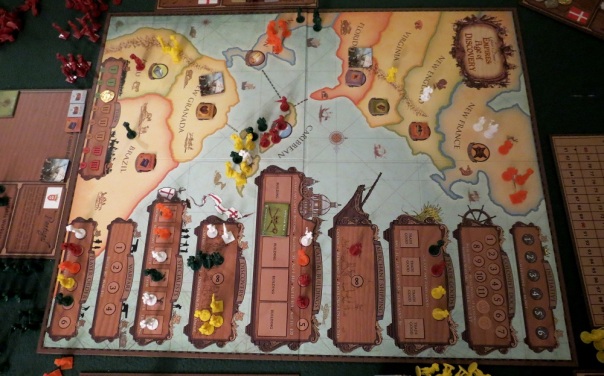 By the mid-game, each move bears consideration.

Best of all, each of these aspects weave together seamlessly, crafting a narrative where a monopolistic empire can be brought to its knees by missionary work and some well-coordinated wars, where the natives of New France might prove impossible to uproot, or where the early conquest of indigenous kingdoms leads to a population boom and sprawling colonies. It does have a tendency to grind to a halt on the eve of scoring rounds as everybody tallies up the number of settlers in every territory, and it’s one of those worker placement games that can get a tad heated thanks to the constant brinksmanship between nations. Watching as your brother-in-law swipes yet another merchant ship out from under your nose even though you dedicated half your workforce to claiming it can lead to some muttered references to his conduct on the night of the bachelor party. Then again, this is also a game where thoughts of vengeance simmer until they explode. And revenge is best when it’s served with gunpowder and a collapsed lead in points.

All in all, it’s easy to see why this was such a classic in 2007. Empires: Age of Discovery might not be as flashy as some other modern worker placement games, but its tale of nations bursting at the seams until they occupy every corner of the known world is every bit as absorbing as the best of them.

Posted on January 19, 2016, in Board Game and tagged Board Games, Eagle-Gryphon Games, Empires: Age of Discovery, Glenn Drover, The Fruits of Kickstarter. Bookmark the permalink. Leave a comment.

← The Dice Must Flow
Posthummus →