If you’re into board games, you’ve probably heard about Pandemic Legacy, the persistent game of disease control from Rob Daviau and Matt Leacock, which alters in unexpected ways every time you play it. There’s no shortage of people who will gladly fill your ears with honey about the greatness of this game; problem is, they want to tell you about it without spoiling anything. Which is altogether too antiseptic for my tastes.

Which is why I’m spoiling, for your benefit, the runthrough of Pandemic Legacy that I’ve undertaken with my wife, my sister, and my sister’s husband. I will spoil everything I can remember to spoil.

IN THE EVENT YOU DO NOT YET COMPREHEND, I AM THE MAD BOMBER OF SPOILERS, AND I PLAN TO SPOIL EVERYTHING, EVERY SINGLE THING, SO DO NOT SEND ME HATE MAIL WHEN EVERYTHING GETS SPOILED AND YOU WERE TOO OBTUSE TO REALIZE IT WAS GOING TO HAPPEN. WARNING DELIVERED.

Our first month on the job begins like any other day at the CDC office, four diseases boiling rampant across the globe, threatening the end of human life. Since we’ve already got the equipment loaded in the van, we’re tasked with sorting out cures — whether vaccines or magic fruit oils, whatever gets the job done. We’ll have to travel around the world, treating cases of the diseases as they appear, then eventually gathering and sharing a bunch of regional information to synthesize the proper cures. Easy peasy. Back in time for dinner.

We’ve assembled a crack team. There’s the Medic (codename: “Rocky”), able to suppress infections with ease. The Researcher (codename: “Hootie Pants”), whose specialty is sharing the cards we’ll need to cure the diseases. Our Generalist (codename: “General Kang”) can do five actions each round, which sounds fantastic until we realize we don’t know what to do with the first four. Lastly, we’ve got a Scientist (real name: Dr. Quinn), who can manufacture cures far more easily than any other team member.

Unfortunately, our hubris is our downfall. Only one of us has played Pandemic before, and we were too proud to take the manual’s advice of doing a couple practice games before jumping into the whole persistent-simulation-of-the-collapse-of-mankind gig. So while Rocky is running and fist-pumping and slaying germs across Europe and Africa and the Americas, the rest of our team bumbles around like cartoon idiots, bumping into and over each other as we try to stem the mounting reports of sickness. Soon, we discover Pandemic Legacy’s first hint of persistence: stickers attached to cities to show their steadily increasing panic. By halftime, Moscow, Bangkok, Mumbai, and Baghdad have become unstable, and Jakarta is openly rioting. As far as we know, their status will never improve, even across multiple games.

We’re off to a great start.

It gets worse. We finally manage to cure our first disease, but now it’s apparent that another of them — the red one, thus far unnamed, which is ravaging Asia and the Pacific Rim — has mutated. Oh dear. We weren’t expecting any big changes until at least the second game. And now some dunderhead back in Atlanta has named it C0dA, apparently oblivious to the definition of the word. It’s sort of like they radioed to say, “Hey, the virus has mutated. We’re calling it EVERYONEFREAKOUT.”

Even so, we’ve finally gotten our rears in gear. No other cities become panicked, and we manage to engineer cures for the three other diseases. Victory! Whew. 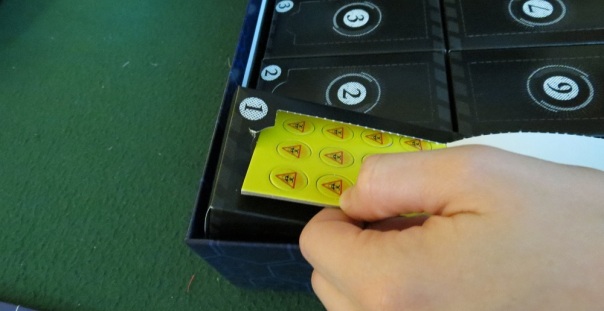 This is when we discover that Pandemic Legacy’s after-game can consume just as much time as the game itself. We’re allowed to make two permanent alterations to the board, potentially mutating one of the diseases to be more easily curable in the future, handing out perks to characters, upgrading the regular city cards found in the deck, or adding research stations that will stick around between games. We bicker for a while, then decide to add a research station in Hong Kong, letting us shuttle between Atlanta and Asia without any trouble. We also give Rocky the “Local Connections” upgrade, which will let him treat diseases in adjacent cities. We figure he deserves a reward, seeing as how he was the only member of the team doing anything constructive.

Right off the bat, C0dA mutates again. Now it’s not only incurable, but untreatable as well. As in, there’s literally nothing we can do to stop its advance. Even Rocky is helpless in the face of this development.

Assistance arrives in the form of a new option: quarantines. These babies can now be added to the board, soaking up infections whenever they appear in the quarantined city. The downside is that we need to physically be in a city to quarantine it, so we drop Dr. Quinn and General Kang from the roster and hire on Jackie Tan, dispatcher extraordinaire. He can move other players around on his turn, and even fly them to meet up. It’s soon apparent that Jackie Tan is our best friend, especially when he’s shuttling Rocky around. We also meet the Quarantine Specialist (codename: “Afrojack”), who can add quarantines anywhere on the board. And what do you know, Jackie Tan and Rocky are long-time co-workers, able to share cards more easily, while Hootie Pants and Afrojack are members of the same family, therefore getting bonus actions when they work together (unfortunately revealing the game’s more fantastical elements).

Team assembled, we prepare for disaster.

Quarantines throughout the southern regions.

And actually, things go pretty well. Almost too well. This time we pay attention to the cities that get infected early on, since they’re more likely to become infected again and potentially have epidemics, which is when the diseases spill out into neighboring cities. This is when cities get panicked and our team potentially gets beaten up, though we’ve avoided that so far. By paying even a modicum of attention to the fact that the same cities keep getting sick, Afrojack is able to quarantine the danger spots, while Jackie Tan oversees the movement of Rocky and Hootie Pants. Our only goal is to cure three diseases, and we manage it in record time.

This time around, there’s hardly any disagreement about which permanent upgrades to add to the board. Our second research center in Hong Kong was so effective at letting us move around and work on disease cures that we’re completely happy adding another to Cairo, putting us within easy reach of nearly any city. We also add a Grassroots Program to our Atlanta card, which later on will let us ditch worthless cards to cure diseases. It’s almost as though the C0dA is done giving us trouble.

Hootie Pants and Neil Patrick Harris have never gotten along.

With C0dA on the back foot, a bunch of paramilitary groups offer their assistance. I’m not sure what that’s supposed to mean — you’d think legitimate national armed forces would be aiding the CDC since the world is, y’know, under threat of extinction — but whatevs. Regardless of any secret goals these paramilitary organizations may be plotting, we have two additional tasks this time: first, to eradicate one of the diseases completely, and second, to establish a paramilitary base in each of the globe’s six regions.

Our team brings on a new face this time around. In addition to Rocky, Jackie Tan, and Hootie Pants, we’re introduced to Neil Patrick Harris, Operations Expert. He organizes the construction of structures with ease, making him the ideal candidate for getting those paramilitary bases up and running. The one downside to NPH’s inclusion on the team is that he and Hootie Pants are rivals, but then it turns out that being rivals makes them work harder, so we don’t really mind. In any case, by positioning everyone at our research center in Cairo, NPH has easy access to three regions without hardly any travel time at all. Remember kids: cut corners. It’s the CDC way, and that fact should comfort you when you’re reading about how Ebola is totally untreatable and makes your eyeballs bleed.

Paramilitary intervention. I’m sure this will end well.

Within hardly any time at all, we have three military bases running in Cairo, Istanbul, and Baghdad, giving us immediate coverage of Africa, Europe, and Asia. We spring for plane tickets for NPH — grudgingly — which lets him set up bases in Taipei, Mexico City, and Bogotá. Meanwhile, Hootie Pants and Rocky are working on keeping the diseases suppressed and the cures inbound. Before too long, everything is copacetic.

We debate long and hard about whether to set up a permanent military base, and opt instead for another research center in São Paulo, mostly because South America was the one corner of the globe that wasn’t within ultra-easy reach. We also work on a positive mutation for the eradicated disease (the “poop crud,” as it’s known by the scientific community). In the future, the poop crud won’t require a research center for a cure to be developed — which we realize too late is sort of dumb, since we have four of the things. 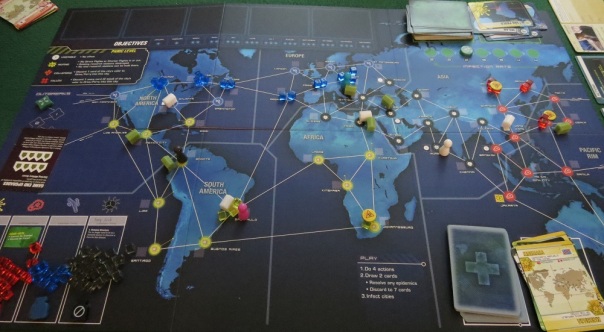 The end of the first quarter: doing just fine.

Ah well. It probably doesn’t matter. Things are going so well, what could possible go wrong next month?

Posted on November 9, 2015, in Board Game and tagged Board Games, Pandemic Legacy, Z-Man Games. Bookmark the permalink. 2 Comments.