I’ll come out right and say it: Hyperborea isn’t actually hyper-boring. That was just too good a pun to pass up.

Rather, Hyperborea is interesting. Interesting and also, unfortunately, a disappointment to its mother. She tells people it’s an investment banker.

Fighting for control of the seat of an ancient civilization.

Hyperborea starts out well enough, making good use of the hook that’s hooked a million hookable gamers: there was this ancient civilization, see, and it collapsed, and blah blah blah, some little sub-kingdoms were kept separated for centuries by a magic barrier that has now failed for some reason, freeing everyone to do all manner of grumpy things to one another. Cue fantasy war.

So you spread from the corners of the world to the heart of the map, uncovering tiles full of little cities to be exploited, ruins to purge of ghosts and then raid, and terrain to spend extra movement points to bypass. It’s vibrantly colorful, has big chunky map hexes, each faction starts with some sleek customization options, and your army miniatures look pretty dang cool. What’s not to love?

Best of all, it’s got a gimmick, a unique way of ordering your guys around. Taking a cue from deck-building games, you’re also playing a game of “cube-building” in addition to what’s going on over on the main map, which sees you pulling tiny handfuls of civilization cubes from your faction’s personal draw-bag and using differently-colored combinations of those cubes to perform actions. It’s nifty stuff, and definitely interesting. 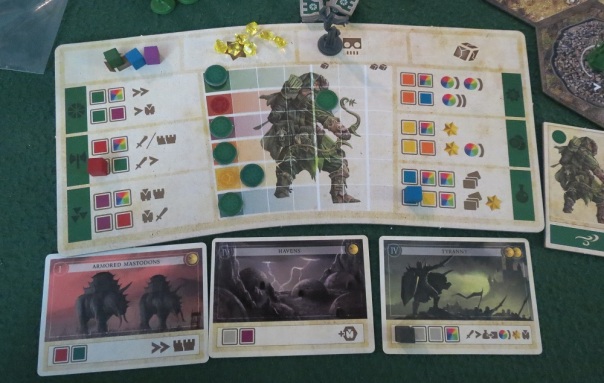 The player board, with basic technologies and upgrade track.

For example, your three draws might be a green, a red, and an orange cube, presenting you with a choice. Should you place the green and red cubes on your player board’s space that lets you move and attack, maybe marching over to that newly-revealed ruin and killing off the ghost that’s sitting on it, letting you take the ruin’s special token that might contain any of a number of bonuses? Sounds great! But instead, maybe you ought to pair the orange and a wild cube, either green or red in this case, to advance two of your technologies, which would let you take a free action to add a couple new cubes to your bag? Hm, that also sounds good. That said, maybe the best choice would be to bank your cubes on future actions, leaving them on your board until other cubes appear to complete the proper combinations.

Some of the harder cube combinations even yield victory gems, which are one of the zillion ways to get points (HYPERBOLE ALERT: it’s really only seven ways. It just feels like a zillion).

Each of the colors corresponds with a type of action — green to move, red for war, purple to recruit, orange to research for more cubes, gold to gain victory gems, and blue to research newer technologies. Everyone starts with at least one of each color, so it’s possible to do everything from the get-go, but only in limited quantities, especially once spots on your player board start getting occupied by previous actions. So you played that cool action to move twice and now you’d like to move some more? Too bad, now that spot is taken and you’ll have to settle for one of the lesser movement options, like a move plus a fresh recruit.

If that wasn’t enough, it’s also possible to move into any uncontrolled ruins or cities as a free action, letting you chain moves together to reach the hardest points on the map. Which is cool and gives your armies something to do other than attack ghosts and enemy armies, even if it also has the unfortunate side-effect of making the map easily explorable within the first round. And the tradeoff is that your armies are then stuck on those cities or ruins until the reset phase, which only comes around once your bag runs out of cubes. 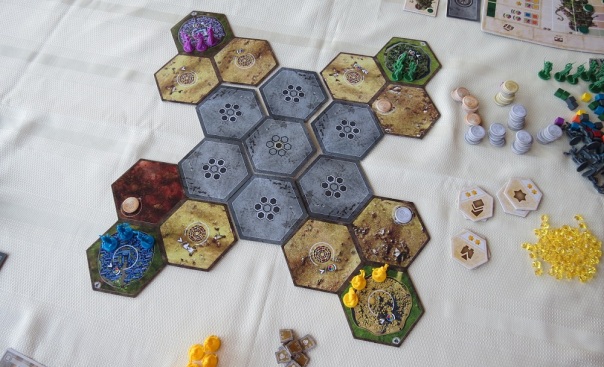 This will be explored within one round.

However, the best part are the advanced technologies. Each gives you a new way to spend your civilization cubes, and once you’ve upgraded your empire to have more of a certain type of cube in your bag, this is a great way to specialize in a particular path.

Tired of never having enough moves or attacks? Then invest in Archery to kill from afar, or Chariots to move and attack more often, or Caravans to travel farther, or dedicate a persistent cube to Flying Ships in order to fly over tough terrain. Want to recruit more often? Don’t worry, you probably won’t want to; instead, you may be after more victory gems, so become a patron of the Arts, or Merchant Guilds because whenever you earn a gem they’ll give you another one, or Plundering to wreck other players’ points. There are even a precious few that help you manage your civilization cubes, like Alchemy, which lets you draw an extra cube and even trade one in for another of your choice.

The tradeoff to researching these new technologies is that each one gives you a grey “waste” cube, which doesn’t fit anywhere on your board and can’t be used as a wild color. No problem! Invest in certain technologies and you’ll be spending them like normal — my favorite is Tyranny, which lets you spend a whole bunch of grey cubes and gives you a little bit of everything in return.

Okay. So far, Hyperborea is doing an okay job. It has an interesting system chugging along under the hood, the technologies are cool… so what’s my beef?

Unfortunately, Hyperborea is whittled down by a thousand paper-cuts, revealing a disappointingly scrawny frame under all those colorful minis and innovative gimmicks. The biggest problem is that there just isn’t very much to do. For a pack of civilizations trying to reclaim the lost glory of a fallen empire, there isn’t much empire-building going on, and you hardly do anything other than recruit guys, move guys, and attack guys. Sure, you also earn new cubes, pick up victory gems, and research techs, but none of those have much to do with what’s happening on the map, and many games are won or lost by whoever manages to quickly buy the most techs or victory gems.

At its worst, the game becomes suspiciously gamey. For example, when you can’t draw any more cubes, you do a reset. You pick up most of your cubes and put them back in your bag, though you’re allowed to leave “banked” cubes on the board so long as that spot wasn’t activated since last reset. The problem is, since your dudes get free actions (and often victory gems) by moving into cities and only move out of those cities at reset, it’s often the best course of action to leave cubes in unactivated spots on your board, slimming down your pool so that you only have a couple turns before you can reset again. And since you’re now effectively selecting the tiny pool of cubes you’ll draw each round, the whole “cube-building” aspect of the game loses its appeal in favor of constant gaming and cube-counting.

There are other problems:

* Since you only draw three cubes each turn, the techs that let you draw an extra cube seem especially powerful.

* Fortresses are basically built of sand and chewing gum, disappearing at the start of your turn and only causing a trivial delay for anyone bent on attacking you. Yet there are a whole lot of techs that will beg for you to purchase them so you can be the proud owner of more disappearing fortresses.

* Not that you’ll be attacked very often. After the first kill from each enemy faction, you only get points if you’ve assembled a “set” of defeated enemies (one from each faction), which means you’re forced to be an equal-opportunity killer if you’re looking to earn points through conquest. This devalues attacking as a valid strategy, and frankly, I grumble at games that railroad me towards a particular strategy just because they don’t think I should pick on someone. Sometimes, picking on someone is the best option—

* For instance, if that someone is in the lead. But being in the lead in Hyperborea means you’re likely to stay there. Players can’t effectively band together against a runaway player, since if you ever have fewer than three armies on the board, you get free armies.

* Worst of all, it simply never feels balanced. Whether it be the technology cards or the factions themselves, some choices are more equal than others.

Two of the advanced technologies get their close-up.

Look, I know I’m coming down harsh on Hyperborea. And as I said up front, there are some things I really like about it, and it’s already apparent that some people are having a good time with it. If you go in expecting a lightweight game with a very compact set of things to do, then that’s what you’ll get.

However, not only is it expensive and large, but it’s also working overtime to convince you that it’s this big epic clash — except it isn’t. The system underneath is interesting, but the game laid across the top doesn’t actually accomplish much, and ends up being more about counting how many cubes you have left in your bag so you can optimize the next move than about waging war for this fantasy kingdom where all the geographical features are suspiciously six-sided. It’s like some dude who spent his whole life drinking nothing but calcium shakes and now his skeleton is fabulous but his skin is baggy and gross. Would you date that person for his fab skeleton?

Posted on September 17, 2014, in Board Game and tagged Asmodee, Board Games, GenCon Loot, Hyperborea. Bookmark the permalink. 5 Comments.