A couple weeks back, I reviewed a family of games from Ignacy Trzewiczek by the name of 51st State, and mentioned that a new implementation of that system was forthcoming. Now it’s here, and a mere glimpse of the original trio’s artwork should provide sufficient indication that Imperial Settlers is going in an entirely different direction. For one thing, the sun shines in this universe. People smile. There’s not quite as much cannibalism.

Is that a good thing? Well, okay, for the inhabitants of Imperial Settlers, sure, of course it’s better. But how about for the rest of us?

The Romans, with nary an aqueduct in sight.

Imagine, if you’re so inclined, a 51st State made for families. Unless you’ve never played 51st State or its successors. Then you can skip to the next section.

The art will have definitely changed. No more murderous mutants with iron spikes embedded in their shoulders, or leather-bound gunsmith babes, or even guns in general. Instead, imagine all that savage imagery transformed into something friendlier, like a Disney version of a violent German fairytale, altered so that nobody pretty dies and justice prevails — and that even the prevailing cultural notion of “justice” has been altered to mean something way less cool than “bad kids get their thumbs lopped off with gigantic scissors.” (Reminder to self: pick up a copy of Der Struwwelpeter for my daughter).

Unlike its predecessor, Imperial Settlers is outright cute. I might even use the word “adorable,” if I were in the business of using that word.

But that sort of difference is only skin-deep. At its core, the entire economy has been chopped in half. Where 51st State provided a two-tier process for building a tableau — scavenged gasoline became a diplomacy token which you could then spend to make deals with cards, for example — Imperial Settlers cuts most of that away. Now a structure is built from wood, stone, and sometimes food; no need to consider a second layer. Also stripped out are things like the three-use rule, which kept you from using points-generating buildings more than three times, action cards for single-use resources boosts, and 51st State’s cryptic iconography that necessitated liberal use of a player aid.

It’s streamlined to the extreme, and while I’m sure that might not appeal to some of 51st State’s more devout fans, the two games feel different enough that they don’t really occupy the same niche for me. Both have you building tableaus, but, much like its grittier artwork, 51st State is the more (intentionally) clunky, hard-fought experience, while Imperial Settlers is more… well, whimsical, I suppose. But more on that in a bit. 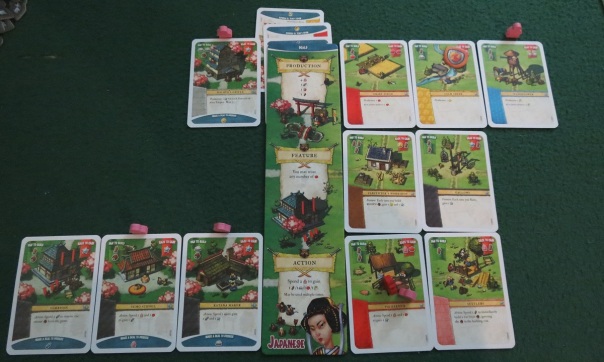 The Japanese Sumo School is my favorite card in the entire game.

The basic concept behind Imperial Settlers is that each card can be used in more than one way. Usually, they’re useful for two out of three things. The first and most common is that any card can be built into your tableau for ongoing bonuses, like new resources, or a way to exchange those resources for victory points, or points when you build a certain type of structure. That sort of thing. The second is that cards can be razed from your hand to provide an immediate onetime influx of resources or points or cards; and the third is that some cards can be used to make a deal, which gives you a little extra whenever you collect income.

Each of these options requires resources, usually food for deals, swords for conquest, and a combination of wood and stone to build. Thus, each round settles into a rhythm of drafting some cards, picking up resources, and then building to your heart’s content, giving your opponent’s tiny empires the evil eye and trying to finagle a way to pick up more points before the game’s five rounds come to a close.

This is the simplified overview, of course. It gets a tad more complicated when you realize that you’re balancing two separate decks. There’s the generic pool, full of stuff that pretty much every nation in history could use — grain fields and taverns and masons — and then there are faction-specific decks. These are full of your own structures, upgrades of the simpler generic buildings, worth twice as many victory points, and complementing your faction’s unique way of doing business. The trick, and what prevents you from just overloading on the better faction-specific structures, is that most of them require a “foundation.” This means you have to discard another building from your tableau in order to build them, so even in the late game you’ll have to continue erecting basic structures in order to make way for the better stuff.

There are other things to consider, like when to use your defense token to prevent enemies from burning your structures to the ground, or taking the fight to them in the first place by destroying their stuff and taking those tasty conquest resources. It might sound harsh that you can wreck a building at all, considering how much forethought sometimes goes into how you order your actions, but Imperial Settlers lessens the sting by turning that building into a foundation and giving its owner a pity resource. In a way, it’s less of a setback and more of an invitation to build something better in its place.

Still, the thing I like best about Imperial Settlers is the way its four factions feel distinct. The Romans build most of their stuff out of stone and field engineers to demolish enemy buildings with impunity. The Egyptian economy runs more on gold than regular resources. The Barbarians get points for attacking and use lots and lots of workers (read: slaves). And the Japanese are easier to attack, at least until they deploy a bunch of samurai to protect their acquisitions. Everyone is doing their own thing, and it produces this really nice, breezy feeling of asymmetry, especially when you’re debating who to attack — would you rather tick off the Barbarians and let them steal your stuff, or the Japanese with their piles of sword tokens?

The Barbarians prepare to invade everyone at once.

Oh, and for a game by Ignacy Trzewiczek, the rulebook is shockingly straightforward. So there’s that, if you were worried about it.

Overall, I’m a big fan of Imperial Settlers. It might not have its predecessor’s complexity, but I’d hardly call it simplistic. Four asymmetrical factions, difficult decisions over how to order your actions and what to build, and overall friendlier gameplay make this one of my current go-to games when I’m not in the mood for something heavier. It’s one of those games where I’m motivated to win and given the tools to make it happen, but when I’m not in the lead I’m not particularly bummed about it. In 51st State I’d be grinding my teeth because everything was gritty and high stakes and eat people to survive all the time, but here I’m just content to toy with my little empire. Right before stealing somebody’s best deal, pillaging their most important resource-generator, and spending the stone and food I just stole to build something that will net me three victory points each turn.