← Valley of the Blings
Red Nile: Rise of the First Dynasty →

These days, I have less free time than ever before in my life. It’s like a university finals week except every day, including the weekends. And although we hold regular game nights, I just don’t have the energy to play some of the longer games I once enjoyed. Four hours for an epic game full of deceit and wheels-within-wheels plotting and a million components? No thanks, you guys can play. I’ll be here munching on the finger-snacks like a cow at midday.

Which is why I’m playing and enjoying so many shorter, simpler, and more portable games as of late. For example, Oddball Aeronauts, which I previewed a while back, recently appeared on my doorstep in all its finished glory, and it’s exactly what I needed this week.

How the discerning-of-taste play Oddball Aeronauts.

Oddball Aeronauts hasn’t changed much since I last wrote about it, but since I realize it’s entirely possible you didn’t catch my previous writeup, I’ll run through the basics again.

Your goal is to deplete your opponent’s deck before she can deplete yours, done by attacking with one of three types of skill — sailing, guns, or boarding. You fan out the top three cards of your deck, both you and your enemy announce which type of attack you’re attempting, and then on one two three you hold up a number of fingers showing how many cards you’ll be wagering on this fight. Count up your totals and the higher number wins. Depending on which skill you were using, you might deal extra damage, heal yourself, or both. Repeat until someone runs out of cards.

It’s incredibly straightforward, though the above description is so bare-bones that you might find it washed up on some distant shore, slowly bleaching in the afternoon sun. There’s just a bit more to it.

It might not seem like there’s more at first though. If you’re anything like me, it’s possible you won’t “get it” your first time through, because its simplicity is easy to mistake for a lack of depth. You’ll blame your defeat on the luck of the draw, on getting the wrong crew-animals at all the wrong times — “Where were my Armored Fiends when I kept drawing Deck Paws!” you probably won’t howl in a public place, though maybe you will if you don’t possess much self-respect. The events, stuff like wind twisters or kraken attacks, will mess up your battle plans, and your enemy will get all the right draws at the right time and they’ll board your ship and steal a card from your deck and murder and pillage your entire navy straight into your discard pile. In that moment, maybe you’ll say something like “It feels like glorified War,” even though you don’t really mean it and wouldn’t say something so thoughtless to your worst enemy.

Or maybe you won’t do all that. What am I, a fortune teller?

The thing is, Oddball Aeronauts is a game of bluffs and wits, of outguessing your opponent. Are they going to wager a bunch of cards on sailing because they need to reclaim a couple cards from their discard? How serious are they about that guns attack this early in the game? Should you wager as little as possible on the off-chance they’ll spend a full three cards and win by a mile no matter what you do? Did that little wink or nervous lip-moisturizing mean your spouse is going to play three cards, or only one? Or two? Could it be two?

Since any cards you play are sent to your discard pile, dumping a full three squads into each fight is a sure path to winning lots of little bonuses but ultimately losing the game because you’re burning your deck way too fast. Here, the route to victory is to win as many fights as possible — obviously — but only by playing the least amount of cards you can get away with. Better to whiff a few fights and only lose the occasional crew-animal than to win every time and discard a whole sky-regiment for your trouble. 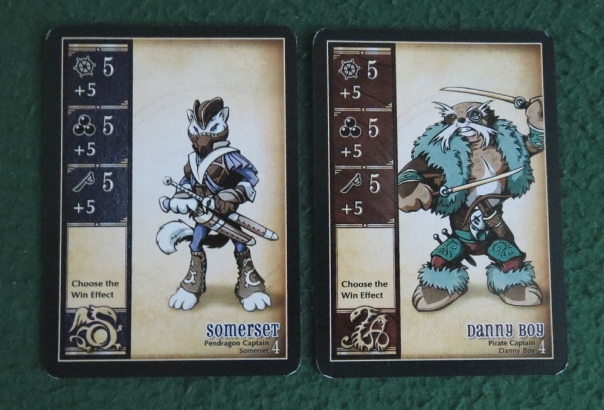 If your crew’s skill numbers are the heart of the game, then their tricks are its brain.

Each unit has one, and clever play revolves around timing their use and getting certain skills to the front of your deck where they can have the greatest effect. They can do all sorts of things, like rearranging a pair of cards to bring the right bonus within reach or get a useful squad out of harm’s way. Some give you combat bonuses when you use a certain type of skill with that unit out front, or let you choose a skill your opponent can’t use next turn, or even let you opt to spend zero cards that round, surprising your opponent because your eyebrow-dance just psyched them into using a full complement and now they’re in a tight spot.

The most interesting are magic tricks. These are powerful combat bonuses, but using them doesn’t guarantee success — a magic trick both supplants your top card’s trick and can be blocked by the presence of certain types of cards in your opponent’s hand, so they’re an unstable proposition at best.

You can use the hooks to catch sky-fish.

All things considered, Oddball Aeronauts has a lot going for it. It’s full of quick, tight gameplay, interesting bluffing, and has lots of replay value. It even comes with customization options, so you can assemble your own specialized anthropomorphic airship crew, if you’re so inclined.

Of course, the best thing about Oddball Aeronauts is that it’s ridiculously portable. Not only does it come in a tiny box, but it also doesn’t even require a playing surface. Everything fits right into your hands, so you can play it in the car, on an airplane or train or bus or go-cart, passed beneath the stall wall in a public bathroom, while hiking, picnicking, waiting around the office for a business meeting, surreptitiously beneath your desk in class or under the dinner table at an extended family gathering, or brazenly at a political rally or in a public library, or at a movie theater because your friends insisted on seeing the latest Transformers movie, or maybe even from the comfort of your living room couch. It’s perfect for the modern always-on-the-go human being.

Oddball Aeronauts is great, tiny, and coming soon. You can preorder it here.

Posted on July 1, 2014, in Board Game and tagged Board Games, Maverick Muse, oddball Aeronauts, The Fruits of Kickstarter. Bookmark the permalink. 5 Comments.

← Valley of the Blings
Red Nile: Rise of the First Dynasty →