← Three Generals Walk into a Bar…
Fantasy Frontier, or Regular? →

Thrice the Pixels, Triple the Tactics

I’m occasionally overwhelmed with feelings of inadequacy, the sense that no matter how hard I try, I won’t be able to convince more people to play Pixel Tactics. I mean, I’ve already written about this gem from Level 99 Games twice (here and here) and apparently there are still a handful of people who have yet to check it out.

But it’s not too late. The third game in the series has just arrived, and there’s hope for you holdouts yet. 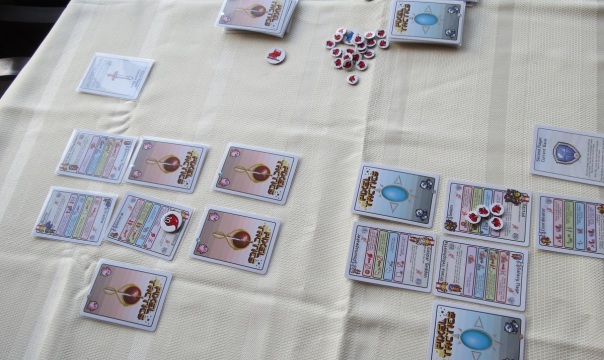 Time for complete and utter honesty: Pixel Tactics may seem a little played-out at this point. If you’ve played the first two entries in this series, you might be wondering what the point of a third installment is. “A third Pixel Tactics? What on earth for? Isn’t it just more of the same?”

True, this is indeed more of the same. And also true, in the past I’ve voiced my general dislike of expansions or sequels that just add more rather than refining, redefining, or truly expanding a game’s mechanics. And yes, we’ve even reached the point where Pixel Tactics is really stretching to find new roles for its combatants to fill; gone are the usual contenders like fighters, knights, and healers, all of whom behaved like, well, fighters, knights, and healers. In their place are ever-more cryptic troops like the Failsafe or the Dispatcher. What on earth is a “failsafe” in a brawling game anyway? And when you say “dispatcher,” do you mean like the tired person who answers the phone when you call the police? In a fight, I’d rather have a cop card than a dispatcher, thanks very much. 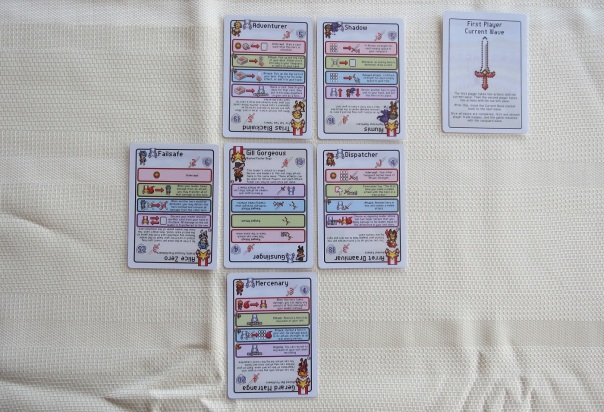 The game is so unchanged that if you’re interested in the nitty-gritty of how it works, I’m going to refer you to my reviews of Pixel Tactics 1 and Pixtel Tactics 2, because other than a minor mechanical addition — “ongoing” abilities that are longer-lasting version of the ongoing abilities from PT2 — this is exactly the same game.

Entirely untouched are the clever-as-ever basics. In essence, each soldier can be used in one of five “positions.” You can have them act as your unit’s leader, the dude or dudette who provides a powerful constant ability that shapes your team’s strategy, and whose life you must protect at all costs. Or you could put your guys into the “vanguard” (the front) row, where they’ll be making melee attacks and screening other troops, or in the “flank” where they usually have support abilities and ranged attacks, or into the relative safety of the “rear” to pull off even trickier special abilities. And if you’re willing to burn them straight out of your hand rather than playing them onto the battlefield, you can play their “order,” a powerful one-shot ability that always sounds great on paper until you remember it gets rid of that troop for the rest of the match.

As with its predecessors, all the hallmarks of Pixel Tactics gameplay are present: tons of competing options for each of your fighters, lots of overpowered abilities that mostly balance out because everyone’s got them, and a whole lot of mean things you can do to your loved ones. It’s the same Pixel Tactics, just more of it.

A few of the potential leaders.

But here’s the thing: I really don’t care. I love Pixel Tactics, and although I wasn’t expecting to be so thrilled with these new heroes and leaders, I ended up falling under the game’s spell yet again. I love their new combos, especially the way they seem to synergize even more readily than past Pixel Tactics heroes did, with lots of heroes supporting their fellows, or blocking damage, or sacrificing themselves to prevent another hero from dying, or calling in help, or boosting everyone’s life points, or creating better chained attacks on the enemy leader right after you killed off his protector. Within two minutes of breaking out the new decks, we were knee-deep in yet another excellent Pixel Tactics battle, with all the nail-biting calculation, positioning, timing, and cautious symbiosis of heroes, leaders, and special abilities.

Put another way, while this set might be more of the same, somehow this “same” remains distinct from all the dozens of heroes that came before. Familiar and still a welcome change, every bit as fun as the previous installments.

If you’ve missed out on previous PT releases, I cannot stress this enough: this game is amazing. It might come in a tiny box, but it’s overflowing with great ideas, emergent tactics, and “Ha, suck it!” moments. If you haven’t already, this is the time to pick it up.

← Three Generals Walk into a Bar…
Fantasy Frontier, or Regular? →