In the Past Tense, Splendid

While I fully recognize it’s a sign of my curmudgeonly age to keep making use of stock “You know what I don’t like?” intros here on Space-Biff!, I still can’t help but say that I really don’t like Eurogames where you have to appease some local medieval or Renaissance lord. Probably because my current landlord demands rent be paid in chickens and/or clay but not roasted on a spit or baked into bricks but yes if I deliver glazed pots full of steamed casserole.

So here’s a game that by all rights I shouldn’t like. It’s called Splendor, and it’s about appeasing medieval-ish lords. It also has a theme so pasted on that it could be about pretty much anything, from importing booze for Prohibition gangsters to selling datachips to shady megacorps. Which raises the question: why is it that I want to be playing Splendor right now? 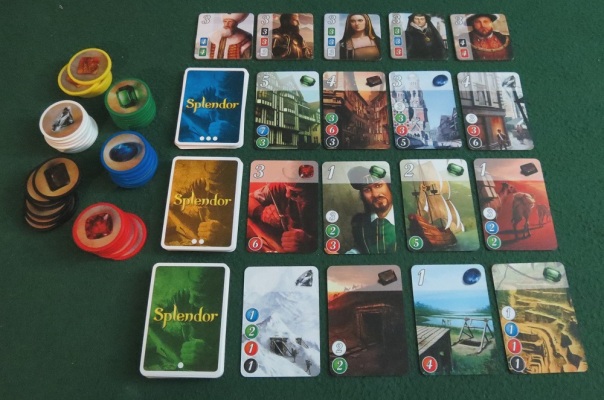 Okay, so here’s the idea: There are a whole bunch of colors in front of you. Gems, things to buy, that sort of thing. You start with nothing. Other than some ridiculously wealthy connections, presumably.

On your first turn, you only really have one choice. Do you take three gems of different colors, or two of the same color? And then on the next turn, your choice is basically the same. Kind of lame. Too straightforward.

Then a couple more rounds pass, and everyone’s picking up a few gems at a time until the piles are running low, and you realize you can buy something. Probably a crappy emerald mine in India. It won’t give you any victory points, but it will give you a discount on future purchases. One less green — pardon me, emerald — off anything you buy in the future. You’ve just acquired a juicy long-term investment. So why not acquire some more?

Fast forward a bit, and you have a whole bunch of stuff. A caravan of elephants, another of camels, a trade fleet, some dude who sharpens your rubies or something, a palace. Do these things matter? Well, yes and no. No, in the sense that they could be anything, any theme, as I said above. But yes in the sense that you’ve just spent the last ten minutes deliriously acquiring things, and you can’t wait to see what else you can acquire.

We all love acquisition, which is why so many games are about it. Even life tends to be about it. For me, it’s keeping score of how many board games I’ve been sent for free because I review board games, which I realize might not be the best thing to say, but hey, we should all be aware that there’s such a thing as reviewer bias, and I’m at least trying to be honest about it. Back on topic, what you acquire can be basically anything, and most games are about acquisition in some form. Resources. Kills. Experience points, victory points. Wins. Especially the hallowed “I’ve beaten you like ten times in a row!” kind of wins.

Most of the time, there’s something standing between you and your acquisitions. Positioning, or negotiation, or enemies on the map. It could be anything, really.

What Splendor does is cut all that away until you’re always acquiring. And I mean all the time. Gems, improvements, medieval lords. Even reserving a card, normally a wasted action in other games, gives you a single gold token, which can be used in place of any other gem. It’s less wealth than you’ll get from picking up a heap of gems, but it still means you’re acquiring even when you’re not really acquiring.

Splendor also understands that human urge to block each other’s acquisitions. If you’re attentive enough, it’s not too difficult to figure out that your buddy is trying to amass a bunch of diamond development cards to make a match of three and entice that medieval lord and her bonus victory points over to his side. So you can block him by depleting the pool of gems he needs, or by reserving the specific development he’s after, or by buying it out from under him. And he’ll groan and you’ll shrug and say something about how random chance sucks even though there’s very little random chance in Splendor.

Very nice insert, if that sort of thing matters to you.

There are other things I could say about Splendor. How it plays really quickly, or how it’s a great filler game for groups of 2-4, or how the gem chips are surprisingly and pleasantly hefty.

But I won’t bother, because the main thing is that it’s addictive, because it scratches that acquisition itch we all have, because it understands us at some lizard-brain level. Are there better games out there? Sure. Of course. But they’ll have to wait a bit, because I’m playing Splendor and I can’t stop.

Posted on April 28, 2014, in Board Game and tagged Board Games, Space Cowboys, Splendor. Bookmark the permalink. 4 Comments.