You might recognize Berserk: War of the Realms as the Russian card game that was on Kickstarter a while back, the one that generated some controversy over its inclusion of scantily-clad (or not-at-all-clad) mythological ladies. You know, the project that eventually included both the original non-clothed and new tiny-bra-wearing art in order to appease both the Artistic Integrity and Nudity Is Wrong crowds.

Or maybe you don’t recognize that at all, because board game controversies are almost always silly like that. It’s one of the things I love about the hobby.

Anyway, Berserk has been out for a little while now, and I’ve been playing it ever since its first release. And while there are still quite a few things I have to explore… hm, that sounds wrong. I’ve been playing with the non-nude cards, in case you were wondering. 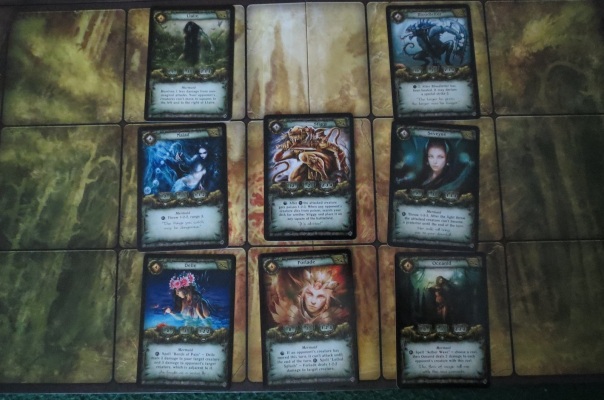 Berserk: War for My Heart

At first glance, Berserk is so much my cup of tea I can almost smell the five tablespoons of sugar mixed in. It comes with seven themed decks, each with their own set of cool ideas. There’s the dwarves with their interlocking bonuses and rank cohesion, the swamp-mermaids and their rule-bending abilities and restrictions, the dragon-folk with their hardened scales that activate abilities after taking enough damage, or the undead with their ability to bring their cards back to life. The elves have lots of ranged abilities, as I’m sure you could surmise on your own. The neutral forces mostly exist to shore up the weaknesses in the other factions, since it’s possible to customize your decks (another perk!). I’m not sure what the orcs do, other than get massacred. Maybe that’s their faction theme.

Each deck of thirty has two broad flavors of cards, unique heroes and generic soldiery — though the heroes aren’t always necessarily more powerful than their rank-and-file brethren — and after drawing fifteen cards you spend points of gold (for the unique cards) and silver (for everything else) in order to cobble together the best army possible. If you have any gold left over, you can turn it into extra silver, so you don’t need to fret about being too exact. Then you lay your army out on a tight grid, reveal both sides at once, and go to battle until one side’s dead.

What’s more, everything I said above undersells the concept somewhat, because this is one of those games where the card abilities can get pretty crazy. For instance, there are flying creatures that flutter out of reach, swooping down to harass those spellcasters you hid behind your meatier soldiers, and because you didn’t bring any ranged troops there isn’t a dang thing you can do about it until you kill all of your opponent’s other creatures and forcibly ground that winged bastard. Or maybe your elves are suddenly disappointed that their dragon-kin enemies can’t be hit by ranged attacks at all after taking a few wounds. Ah well, don’t worry about it, since a game only takes about twenty minutes you can try a new approach in just a moment.

If it sounds awesome, it did to me too. It has a solid foundation, built on tried and trusted concepts. And hey, it’s supposedly more popular in Russia than antifreeze. 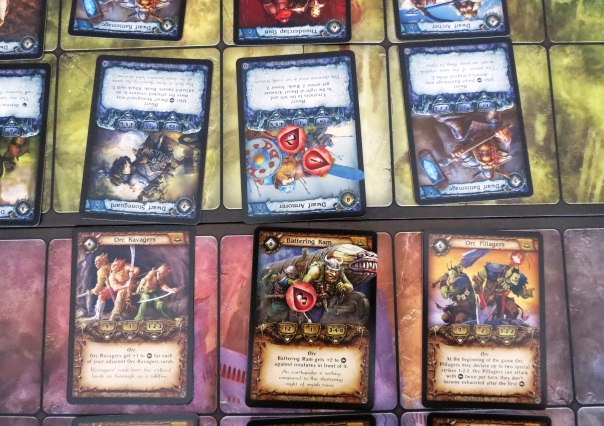 Your armor is no match for my battering ram!

Berserk: War for the Comprehensible Rules

Unfortunately, there are two problems that quickly rear their ugly head and make Berserk crack a little. Or a lot, as the case may be.

The first is the rules. To say they suffer in translation would be putting it mildly. Not only are they translated so poorly that the cards and the rulebook will sometimes use different words to mean the same things, prompting constant returns to the rules in order to seek some sort of clarity, they’re also just… well, they’re simply bad rules. They hide away many essential tidbits in a glossary. They describe card types that are part of the broader game in Russia but don’t exist in this current incarnation at all. They aren’t particularly concerned with telling you the actual goal of the game — sure, your goal is to “defeat all opponents in battle,” but what does that mean? Do you painstakingly exterminate every last enemy monster off the board, or play to a certain number of gold/silver kills? In case you’re wondering, it’s the former, and it’s hidden away on page 12 of the rulebook.

Ultimately, this is a surmountable issue. It will take a few forum visits, some puzzling through the rulebook’s vague intentions, and maybe some agreed-upon interpretations by both players, but it’s doable. Unpleasant, tedious, and unnecessary, but doable. 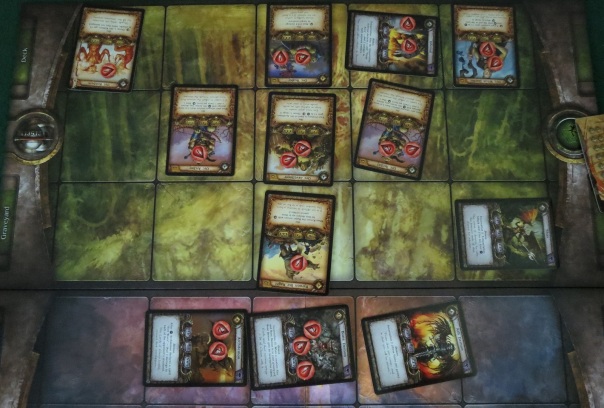 Some hapless orcs get brutalized by the undead/demonfolk.

Berserk: War for the Balance

The second problem isn’t quite as easy to address, as it’s the one that very nearly ruined the game for me.

Berserk is a customizable card game, meaning that once you reach a certain level of play, you’ll grow out of the pre-built sets and want to customize your own deck. There are certainly enough cards to appease the most diehard customizer, since in addition to its seven established factions, there are a ton of cross-realm cards you can make use of. And theoretically it all balances out, since having more realms on the board means you have fewer gold and silver points to spend, so you have to choose between the versatility of multiple realms or higher requisition points. You could, for instance, design a deck filled to the brim with every faction’s best cards, though the resultant army will probably be tiny compared to a better balanced deck.

For those who aren’t going to reach that level, or for anyone just trying to get a handle on Berserk, the game tells you that it’s possible to play with any of its pre-built decks. Y’know, so long as you discount the uncomfortable detail that those decks aren’t even close to balanced. 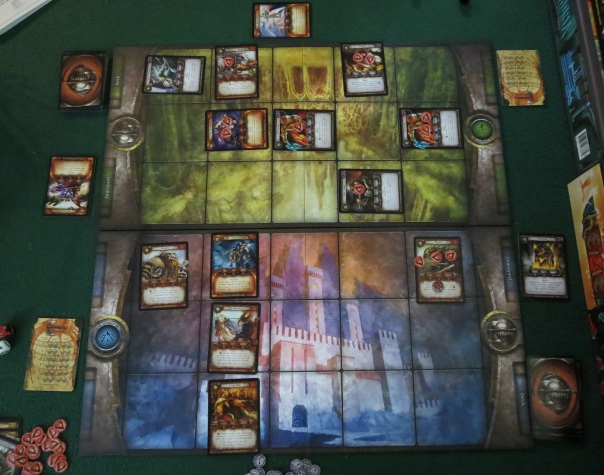 Sometimes this isn’t an issue, like when both players are running a crappy deck. More often though, the instant both sides reveal their armies, you’ll have a fairly solid idea who will win. Which is a shame, because there are lots of cool ideas on display here, from the wild uniqueness of each faction to the interesting variable-damage system and the way you can have your monsters protect each other on your opponent’s turn. It’s just that some factions are more equal than others. The undead team, for instance, can bring their guys back to life, often for very little effort, and their prices don’t reflect their sheer awesomeness. Or there’s the mermaids and their silly-powerful abilities, like the one who deals damage to every enemy of a certain cost. It was pretty funny when my friend had an entire army of 6-cost units. I basically won that battle with one card. It was hilarious. He didn’t have much of a desire to play again though.

Nearly every time I sat down with a friend to learn the cards by playing with the base decks, the experience followed the same unfortunate outline. The army selection phase was fun and got us hyped for the experience, and then we’d settle in to act out a foregone conclusion based on nothing more than our decks. Now, I’ve seen a couple folks defend the game with the argument that it isn’t meant to be balanced. You’re intended to craft a custom deck, after all. Someone even mentioned how Magic: The Gathering isn’t balanced — despite the fact that M:tG is fastidiously balanced, and allows for all sorts of winning combinations, and sells pre-built decks that don’t absolutely put one another to shame. And anyway, the game says upfront that I can play with any deck, and while that shouldn’t necessarily imply that any deck is tournament-ready, it should at least mean that it can show me six or seven winning strategies.

Still, I mentioned above that this problem nearly ruined the game for me. I almost bent beneath the weight of imbalance, but in the end, Berserk mostly redeemed itself. 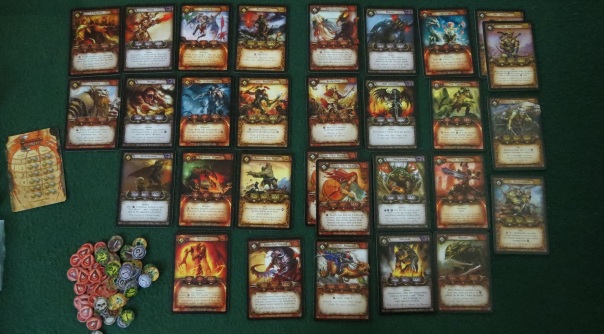 Drafting up an army.

Berserk: War of the Drafting

I was ready to write off Berserk as a box containing some great art, a few good ideas, and a lot of letdown, when Somerset recommended we try the drafting variant. We love drafting games, after all. And that way, she pointed out, we’d be playing with multi-realm custom decks without the need to learn all the cards or spend hours fine-tuning card synergies.

So we mixed everything together (sans the multi-realm cards, we aren’t quite ready for that), dealt out a few piles of cards, and began assembling two new decks from scratch. We each got a few broken-awesome cards, passed on the stinkers until we were eventually forced to incorporate them into our designs, and ended up with respectable multi-realm armies that were both more balanced and more interesting than anything we’d played before. The match that followed was tense, close, and bloody. Positioning mattered, as did decisions about when to activate our respective special abilities.

In short, it was everything I’d wanted from Berserk in the first place. Well, not everything. But close.

I’m still somewhat disappointed that Berserk is so poorly documented and apparently doesn’t think too much about balance, but after playing the drafting game, I recommend giving it a try — so long as you’re aware that this isn’t quite as perfect a package as it first appears, that is.

Some people love Berserk: A War of the Realms more than Dan did. Like all of Russia. And for all we know, maybe you’re one of those people. The only way to find out is by purchasing it on Amazon dot com, which gives money to Dan sometimes if you use this fancy link to do your shopping.

Posted on February 4, 2014, in Board Game and tagged Asmodee, Berserk: War of the Realms, Board Games, Hobby World, The Fruits of Kickstarter. Bookmark the permalink. 17 Comments.