I almost passed over Titanium Wars just because its name is so doltish. Apparently, in the far reaches of the distant future, folks have discovered a powerful new source of nearly-limitless energy… and named it titanium, just for the sake of double-booking a fairly specific word. As though titanium’s day job as Atomic Number 22 just wasn’t making ends meet or something.

Notwithstanding the minor detail that pretty much anything would have made for a better title (my group kept reflexively calling it “Tiberium Wars,” which yes is already taken but shows how easy it would be to slot any old made-up sci-fi energy name in there and call it a day), it turns out Titanium Wars is a surprisingly good negotiation game. I’ll explain below. 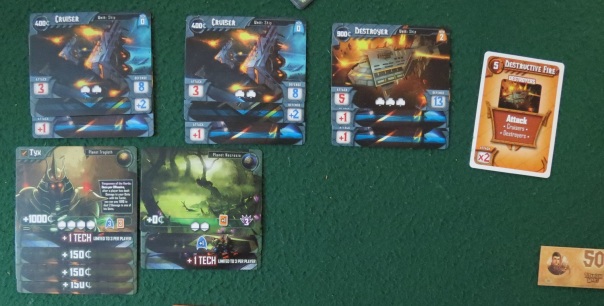 The Empire of Somerset.

Although it might look like your usual run-of-the-mill 4X game thanks to its galaxy-blue card art, myriad spaceships, technology upgrades, and explorable planets, Titanium Wars is pretty slim for a “space” game. At its core, it’s about two things.

The first is empire- and fleet-building. After each round begins with the exploration of a new planet/event combo (resulting in pairs like the wealthy world of Floresia, surrounded by armor-repairing parasites, or dockyard Borealis on the periphery of a navy-trapping black hole) and the funneling of a wad of credits from your conquered planets to your discretionary fund, everyone begins a galactic-sized shopping spree. All at the same time, everyone gets grabby with the sizable card offer in the middle of the table, mustering fleets of fighter squadrons and cruisers and interstellar missiles, populating planets with spaceports and research labs and support artillery, and upgrading ships with extra weapons, defenses, and the odd blast shield or self-destruct device. This portion of the game is a gleeful buffet, each option another trough of bacon or stack of pancakes or whatever it is you people glut yourselves on at buffets, and it only settles down once everyone finalizes their picks, sits back (because it’s nearly impossible to play this phase seated) and announces their purchases, attaching buildings to planets and upgrades to ships.

The second half of each round is a battle to conquer that round’s planet and its rich depots of titanium (ugh). In addition to all those ships and planets, each player also has a hand of tactics cards that show details like an initiative number, and what ships are activated and attacked by that tactic. At the start of this phase, playing a tactic face-down onto the table announces to everyone that you’re in. Anyone can bow out before the battle, or between any of the possibly-many “offensives” that make up a single attempted conquest, and doing so will preserve your fleet and tactics cards to fight another day, perhaps after another round of beefing up your ships. But when you bow out, you’re also removing yourself from the race to conquer that planet, and you might as well go make a sandwich while the big kids play in the mud.

Then, all at once, everyone reveals their tactic cards, and you begin resolving them in order of their initiative number.

Is Borealis worth dying for?

This part of the game is all about negotiation, though it might not seem like it at first. In our first game, we drew an event that told us this planet was afflicted by “Radio Silence,” meaning negotiation wasn’t allowed in the conflict for that planet. “So what?” we said. After all, there aren’t any space-resources to dirty your hands with. You aren’t allowed to exchange credits or ships. Even alliances are short-lived because only one player can occupy each planet and there are no rewards for second place. We couldn’t figure out what on earth it wanted us to negotiate about.

But we’ll come back to that in a moment.

Here’s how battles work. There are eight possible tactic cards you could be holding in your hand (your hand size starts at three cards, though some planets and buildings can expand that), and each tactic shows three things. The first is when it happens, then which of your ships it activates, and, finally, who it targets. The “Barrage” tactic, for example, has an initiative of 2, so its effects take place after any revealed tactics with an initiative of 0 or 1 but before any others. It activates your cruisers for double damage, but it only targets fighter squadrons. This means it won’t have any effect if you don’t have any cruisers, or if the enemy doesn’t have any fighters, but if those two details align, you have a good chance of blasting the enemy out of the sky.

If it sounds straightforward, that’s because it is. Calculating damage is as easy as counting up the red numbers on the activated ships and placing damage tokens on enemy ships. Simple.

So simple, in fact, that we were missing out on a considerable chunk of the game.

An Economy of Explosions

In one recent four-player game, Somerset and I were becoming galactic powerhouses while the other two players were still struggling to seize their first colony. Since our fleets were the biggest and scariest, each offensive was a slugfest between our two armadas while the other players distributed their firepower equally between all possible targets and hoped neither of us survived the slagging or turned our attention towards them.

After a couple exchanges, I realized that regardless of which of us got that planet, the fight would leave our fleets smoldering wrecks that would take multiple rounds to replace. So I shifted into diplomacy mode, promising our two underdogs that if they wiped out Somerset instead of spreading out their damage, I’d bow out of the next offensive and one of them could take the planet. They were happy to agree: Somerset’s fleet was deprived of its best ship (a destroyer laden with extra armor and weapons), my own fleet remained more or less intact, I stayed out of the next conflict, and after a couple minor battles, one of the other players conquered the planet. It was a win-win-lose-lose situation, which is about as good as it gets in Titanium Wars. Better yet, it kicked off a series of intense negotiations as Somerset persuaded everyone to play kingmaker for her side by forcing me out of the next conflict.

Fast forward another couple rounds to another, similar promise: “I just want Somerset to lose this one, because she has the best fleet” — this was arguable — “If you wipe her out, I promise I’ll bow out of the next offensive.” After some waffling, one of our players said that he trusted me because I’d kept my earlier promise when I didn’t have to. Somerset’s armada burned in orbit around the planet Mistian, and the most controversial line of the entire evening escaped my lips not ten seconds later:

I said it as I laid out my tactic card, eyes on my friend’s face as it dawned on him what a mistake it was to trust me, and Somerset blurted out that she’d told them and that they never listen to her, and someone said something about never trusting me again, and awesome.

This is what my group missed on our first play: the sole commodity you’re trading is damage. It might not be as glamorous as space-moss or whatever else other space games let you shuttle around the galaxy, but it leads to consistently tough decisions when your fleet is on the cusp of falling apart but you could swear your single remaining opponent’s is too — so do you push or fold?

Best of all, this game’s bloody economy encourages some of the shortest-lived alliances of all time, spanning the entirety of maybe two minutes before everyone’s up for sale again. Unless you’re playing with one of those obnoxious couples too lovey-dovey to blast their partner’s flagship into constituent atoms; in which case, ditch ’em until they’ve been together long enough to derive sadistic passive-aggressive pleasure from crushing each other’s hopes, because that’s what negotiation in Titanium Wars is all about.

Continue the battle, or bow out of the fight?

The other thing I want to mention about Titanium Wars is that not all the cards are equally useful, but all are useful to some degree. The interstellar missile is the perfect example: it’s pricey, requires you to tech up to purchase it, and requires its own tactic card to launch. Worse, that card activates at initiative 6, meaning that even if you happen to have that card and a missile, there’s a good chance somebody will shoot it down before it gets the chance to detonate.

Even so, just having one on hand is a fantastic way to psych people out. An interstellar missile in your arsenal means someone is likely to waste a turn on something weak like a “Planetary Fire” tactic just to make sure your missile gets blown up first, or someone will spend a bunch of money defending their ships with blast shields, or, ideally, someone will retreat from the offensive because although interstellar missiles deal damage to every enemy ship, they don’t hurt ships that are hiding back home because they’re scared of interstellar missiles. In one recent game, two missile attacks failed in succession, looking pretty near useless; and then a single well-timed missile went off and dealt over forty damage. Forty unblockable non-negotiable damage.

The many drafting options.

There are a whole mess of other little things I like about Titanium Wars. I like how when it tells you a game is going to take 60 to 90 minutes, it means a game is going to take a little more than an hour but a little less than an hour and a half. I like how there are lots of ways to upgrade your worlds and ships, and none of them ever really become obsolete — even fighter squadrons and basic laser cannons somehow manage to stay relevant. I like the sneaky ways it allows you to bluff, whether playing useless tactic cards when you’ve got nothing or picking up extra arsenal cards during the shopping spree portion of the game to throw off anyone who’s trying to monitor your purchasing habits a little too closely. For such a light game, there’s a ton going on here.

On the other hand, it’s still far from perfect. It runs a bit short, for one thing — as soon as you’ve got your empire humming along, the game’s over, and the difference between the “short,” “standard,” and “long” games is one point of titanium each, so it’s completely possible for a short or long game to be determined in the same number of planetary conquests. The negotiations can tend towards a screw-the-leader mentality. Paper money is so last century, and feels strangely outdated in a game about the distant future. And at times, it’s a little too light for my tastes, just because I like being contrary and celebrating lightness only to criticize it a few sentences later.

Still, Titanium Wars gets my recommendation. I picked it up because I was in a mood to write a negative review, and its ridiculous title certainly seemed to indicate it would provide exactly that. Instead, I got a fabulous filler game that works great with cutthroat negotiators who don’t have too much spare time on hand for slitting throats or cutting their enemies off at the knees.

Posted on October 14, 2013, in Board Game and tagged Board Games, IELLO, Titanium Wars. Bookmark the permalink. 8 Comments.