← Dominions 4: Thrones of Ascension
A Pair of Saboteurs →

The Other Defenders of the Realm

Defenders of the Realm: Battlefields holds the unfortunate distinction of being the game everyone gets excited about for all of five seconds before someone realizes it’s not the original Defenders of the Realm. “Hey, is this that really good co-op game by Richard Launius?” Somerset asks excitedly when she sees it sitting on the table. Just kidding, she doesn’t know Richard Launius’s name off the top of her head. Worse, five seconds later she’s disappointed because she can see the box is way too small, not to mention it’s got that apologetic “battlefields” hiding under the main title like a bashful turtle.

Instead of holding that against Battlefields, let’s give it the benefit of the doubt and examine whether this tiny turtle is too timorous for success.

The forces of light and darkness battle over Amarak Peak and Blizzard Mountains.

Although I wasn’t expecting much, Defenders of the Realm: Battlefields has a few good tricks up its sleeve.

It’s got the same area-control-of-a-horizontal-battlefield thing going on as found in a few of my favorite Small Box Games like Hemloch, Omen: A Reign of War, and The Valkyrie Incident, and it’s a fluid mechanic so long as the game doesn’t get bogged down by wonky rules or tedious gameplay. That’s a good sign, because the rules themselves are pretty simple: draw an initial hand of cards, play one card on your turn to one of the three visible battlefields (or discard between one and three), and then draw up to your hand limit. Nothing to it. In the good meaning of the phrase.

Second, though the theme of sickeningly evil minions versus sickeningly noble heroes is overdone, it’s recognizable enough that the cards pretty much do what you’d expect. Especially on the heroic side, healers heal, dwarves are stout, mounted paladins or captains are heavy hitters, and the women don’t wear much protection over their thighs or chests. The evil side requires a little more reading (for instance, a “skarr” isn’t so common in fantasy that we should instinctively recognize he’ll take two hits to kill rather than just one), but the two sides are ultimately identical other than their art, so it’s easy to pick everything up within mere minutes of beginning a game. This definitely isn’t the type of game that requires a few losses under your belt before it permits you to start winning.

The requirements for victory are always visible, tied as they are to the titular battlefields. These function both as victory points, as the first player to conquer a certain number wins instantly, and as unique locations for good and evil to duke it out. Not only does each battlefield offer a unique reward to whoever seizes it, they also have different criteria for the seizing itself. For instance, to capture the Unicorn Forest, you need four cards of descending values, and upon being captured the winner gets to draw two cards and pick one to keep every turn until the next battlefield is won. Amarak Peak, on the other hand, can only be captured by whoever stacks 40 points’ worth of fighters there first, and lets the winner pick the next battlefield.

Even the battles themselves hold some appeal. Whenever you play a card, it makes an attack and potentially stuns one of the opposing minions already in residence at whatever battlefield you just deployed it to. Only when all your minions at a battlefield are stunned do you start taking losses, and you can revive your soldiers with healers or by discarding similar cards — a discarded Dark Wizard will revive one of your stunned Dark Wizards, for example.

Although there are plenty of ways to use your cards, Battlefields manages to flavor the stew with its best ingredient yet: your generals. You begin each game with a limited number of these, and in place of your usual action you can opt to send one to a battlefield to lend a hand. Or a fireball. Or extra cards. Or the power of teleportation. Generals have tons of awesome abilities, though each will steadily drain their limited pool of magic crystals, and once they run out (or once the battlefield they’re at is won or lost), that general is permanently retired.

This is easily the game’s best mechanic, as the generals create an additional decision space that lingers over the game like the stench of death over the field of battle. Although a General is often the easiest way to cinch a battlefield or turn a losing fight to your favor, the tradeoff that they’re gone for good once used makes every deployment sheer agony.

After only a few turns, you’ve got a whole mess of leaks that need shoring up, and not nearly enough actions to do it. Even your best-assembled army will be filled with stunned troops, the enemy will be on the cusp of sneaking another battlefield out from under you, and your one general will be running out of gems. In addition to the fight between good and evil, there will be a wrestling match going on in your skull over whether to deploy a double-attack yimkrall (eagle-headed warrior dude thing) to turn the tide, or revive your hardy sand rider because it’s unlikely he’ll be defeated anytime soon.

And when it works, it really works. In theory at least, all these little details add up to create one of the better area-control-of-a-horizontal-battlefield games I’ve ever played.

Sadly, that only makes it all the more tragic when Battlefields trips, falls on its face, and, in a scramble to get back up without looking completely foolish, slips over the edge of the nearby perilous cliff.

For one thing, its thematic edge becomes rather blunted after only a few rounds. It’s abstract in the extreme, including battlefields that offer capture requirements like “to win, only deploy even-numbered cards here” or “for victory, play a matching pair and a matching trio” or “this region requires a monk and you can’t play wild cards” or “only deploy blue and green cards here.” Add the fact that other than a couple exceptions like the healer/hemlock (the bad guys’ version of a healer, though it’s a dragon), your cards don’t interact or build off of one another, and we’ve got some depressingly flat gameplay on our hands. Most of the cards even dictate which enemy minion they make an attack attempt against, so there isn’t often any element of choice involved there either. For the most part, you might as well be playing “RED TWO” rather than a necromancer. 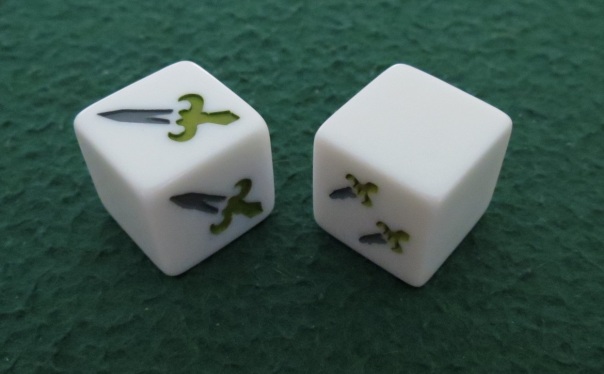 Worst of all, Battlefields is hilariously random.

I’m not talking about the luck of the draw and the hand management portion, because other than the bland card powers that’s completely fine. Rather, I’m talking about the hideous 50:50 odds the dice give you to hit when one of your cards attempts an attack. This means it’s not particularly uncommon for a string of luck to absolutely wreck all the careful planning in the world or hand victory to the most incompetent fantasy nincompoop of all time. It’s nothing short of infuriating. You could, for instance, play a phenomenal game of hand management, only for the dice to screw you out of a well-deserved victory. And when the cards make the game uninteresting as it is, that’s just adding insult to injury.

It’s unfortunate, but Defenders of the Realm: Battlefields ends up being the timid turtle after all. Though in this case it’s a timid turtle that craps all over the place at random intervals.

Posted on July 15, 2013, in Board Game and tagged Board Games, Defenders of the Realm: Battlefields, Eagle Games, The Fruits of Kickstarter. Bookmark the permalink. 6 Comments.

← Dominions 4: Thrones of Ascension
A Pair of Saboteurs →