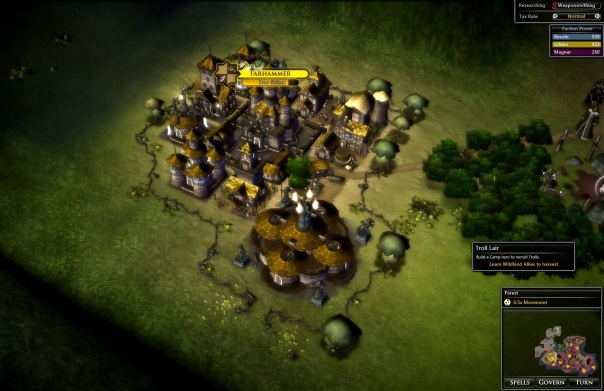 The Gilden city of Farhammer.

After only a couple hours with Fallen Enchantress, it was plain that Stardock had learned some strong lessons from the disappointment of Elemental: War of Magic. Magnar and his growing retinue of allies were on a happy romp across the Desolate East — now an actual magic-ravaged desert rather than the lukewarm fantasy of the first game, which was filled with characters who were constantly insisting that no, really, this is a wasteland. Magnar had founded eight proud cities, assembled a few decent armies (mostly composed of freebie slave militia), and done some stuff that could only rightly be called heroic, even though he has a strong dislike for that term. After all, what else do you call a team of adventurers who drives back a demon invasion? Neglecting the fact that in the end they’d persuaded the demon to join up, of course.

Now, with the appearance of the arrogant Kingdom of Gilden and their vast treasuries and demands for tribute, times are a’changing for Magnar’s Empire. 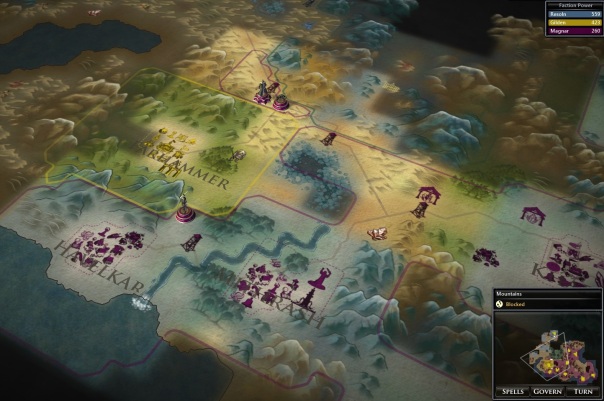 The map of my western empire, with Farhammer right in the middle.

As much as I might like to keep Magnar adventuring forever, it seems the wild territory of the world has all been tamed and colonized. My portion is the eastern third of the Desolate East, and most of my territory is tucked away behind vast mountain ranges and the fortified stronghold of Khaffara, which boasts a massive garrison of actual soldiers rather than my usual slave militia. I imagine the Imperial troops there are told something grim and inspiring like, “If Khaffara falls, the Empire follows.” Barring the odd darkling uprising or pack of giant spiders, all the land east of that checkpoint is secure. To the west, the Kingdom of Gilden and the Empire of Resoln have crowded into what remains, and now my empire is rubbing up against the former.

Things are tense with the Gilden because suitable living space is appropriately rare in the Desolate East. Settlments can only be founded on fertile terrain, and even then you need to take into account other factors like the quality of local building materials and the strength of the land’s “essence,” which lets you put enchantments on your cities to make people more productive or more “productive,” depending on whether you want them to work harder or make more babies. This means useful land is a rare commodity, and is usually gobbled up as soon as it’s discovered. So when I spot scouts on my border — not the usual poking of darkling scouts, but the hirelings of an actual nation — I don’t give them the chance to pounce on the fertile river valley to the west. Instead, I send a few bands of pioneers past the safety of Khaffara to settle it before anyone else. It turns out the Gilden had the same idea, and while I get the more fertile spots, settling Mithrash and Havelkar along the river, they manage to score the more defensible one, plopping down the city of Farhammer right in the center of a ring of mountains.

Lord Markin, master of the Gilden.

This is problematic. My population dwarfs that of the Gilden, but many of my people are untrained slaves, and the Gilden’s abilities all revolve around fantastic production. Soon Farhammer is a humming engine, pumping out powerful iron golems and setting up city improvements at a pace I can’t match. While Mithrash is barely getting by and Havelkar struggles to make ends meet, Farhammer prospers. As a result, their borders expand and threaten to block me off from the ancient road that cuts north through the wide sandy desert. If they manage to lock that route down, I won’t have easy access to the middle territories of the Desolate East, and will either have to risk war by traveling through their lands uninvited, or taking a months-long journey around the mountains that encircle Farhammer, a dangerous trip plagued by currently-unbeatable dragons.

I solve the problem by setting up outposts along the road, claiming a narrow corridor for Magnar. Naturally, this annoys Lord Markin, leader of the Gilden, because I’ve just done to him what he was about to do to me by claiming access to the entire highway. The troops that once flowed north are now trapped in Farhammer, which has become an island in the sea of Magnar’s Empire. And the Gilden need those troops, because they’re currently locked in a war against the other Empire, Resoln. Lord Markin starts demanding tribute like clockwork. I refuse like clockwork. And the Gilden’s hatred for Magnar tick tick ticks ever hotter.

By declaring war on the Gilden I’ll be earning myself a powerful enemy, one that currently outclasses me significantly. Still, it’s worth the risk. It will ingratiate me with the snotty Empire of Resoln, who are constantly snubbing my diplomats, and it’s not as though war with Gilden is avoidable anyway. Three armies depart our heartland and take position around Farhammer — a mercenary band to the south, expensive to maintain but free to recruit; a pack of ogres (which I painstakingly learned to control only a couple years earlier) on the northern road; and Magnar’s own army a bit beyond that. As soon as we declare war, Farhammer abandons whatever civic improvement they were working on and begins hammering out more iron golems. Gulp. I’ll have to work fast.

As the mercenaries march towards Farhammer to meet up with my ogres, a Gilden relief army appears from the north — probably troops that were fighting the Empire of Resoln. I hadn’t counted on that. Magnar’s army abandons the siege to move up and engage this army before they can capture my nearby outpost. I’m relieved to discover that it’s a specialized force of catapults, well-suited for besieging Resoln’s cities but not so much for fighting piles of slave militia on open terrain. With the catapult crews clapped in irons and shipped back to Mithrash to be put to work, Magnar returns to the front, leaving behind a small detail to ensure there will be no more surprises.

The plan is to attack in two phases. First, my pricey mercenaries and ogres will valiantly give their lives to weaken the Gilden defenders, which will also have the tidy side-effect of significantly decreasing my army’s upkeep. Then Magnar’s force will move in and mop up whatever stragglers remain. Victory before Christmas, or whatever Christmas-equivalent exists in the Desolate East. Probably Magnar’s birthday.

My army is a fine one. Both the mercenaries and the ogres were instrumental in waging war on that upstart demon and his massive horde, and through a half-dozen engagements they’d always come out on top. Here they are, approaching Farhammer:

My army of mercenaries and ogres.

Now it seems they’ve been outmatched. I hadn’t counted on the sheer volume of Gilden defenders: 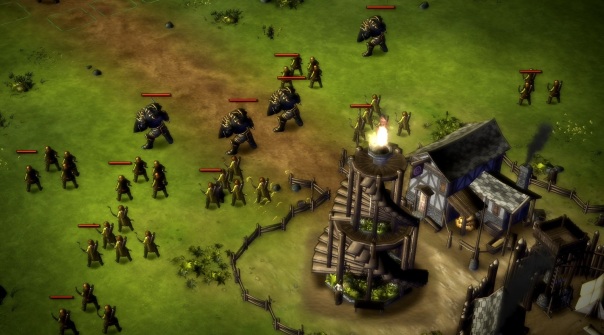 Yeah, scroll up and down between those two images for a bit. It doesn’t get any better.

It occurs to me that by cordoning the city in, I may have signaled my own undoing. Since the Gilden troops haven’t been able to travel north to fight the Empire of Resoln, they’ve been staying put, and they’re hankering for a fight. Many of the defenders are weak city militia types, but there are plenty of elite archers and nimble scouts mixed in, and their towering iron golems aren’t anywhere close to a laughing matter. What’s more, their companies hold more troops than mine, so my twelve mercenaries and three ogres are facing thirty-three soldiers and four golems. With no option to fall back (that I can see), my only option is to have my troops put on the best show possible.

Unfortunately, the first act of that “best show” consists of my ranged mercenaries being turned into pincushions by the enemy’s far better archers. It goes a little better once my ogres lumber into place and start punching people, and my few remaining mercenaries manage to charge deep into enemy lines and get revenge on a few of the archers, but the battle ends only a couple rounds later. How bad was it? Let’s just say I didn’t get my money’s worth out of those mercenaries.

I consider pulling back and suing for a ceasefire, but my tentative meeting with Lord Markin indicates that such a treaty would cost an arm and a leg and all my kingdom’s money. I also consider raising another army, but any time I spend reinforcing will be spent similarly by my opponent, and I’d only end up facing an even stronger army the next time. Well, Magnar always says to never leave to others what you can do for yourself, so I march him and his best soldiers into Farhammer, and cross my fingers that I won’t be using up half my mana to revive him and his champions when the battle’s over.

To my surprise, it goes perfectly.

The second day of battle.

To be fair, my army is impressive. Magnar has become a significant fire and death mage in addition to being the best slaver and haggler in all the Desolate East, and he’s accompanied by four powerful champions, all of whom are powerful wizards in their own right. A company called the “ash mages,” which cost me most of my crystal reserves, plays the part of magical artillery. And Pox the Demon is still making good on his deal to support Magnar ’til death do they part (he probably didn’t count on Magnar being immortal).

While Magnar’s charges up a powerful fireball spell, his champions blast the stuffing out of the archer defenders, killing so many that their storm of arrows, such a potent force in the previous battle, is pathetic and harmless. Pox charges up to crush the enemy scouts and iron golems alike with his demonic talons. Sothia, chief among Magnar’s champions, summons an earth elemental behind enemy lines as a distraction, which causes chaos among the Gilden infantry. And finally, Magnar’s fireball slams into the defenders with such power that nearly half of them are killed in one blow. All that remains is some mopping up.

Thirty-three new slaves and the golden city of Farhammer are added to Magnar’s Empire. Farhammer looks better in blue anyway. 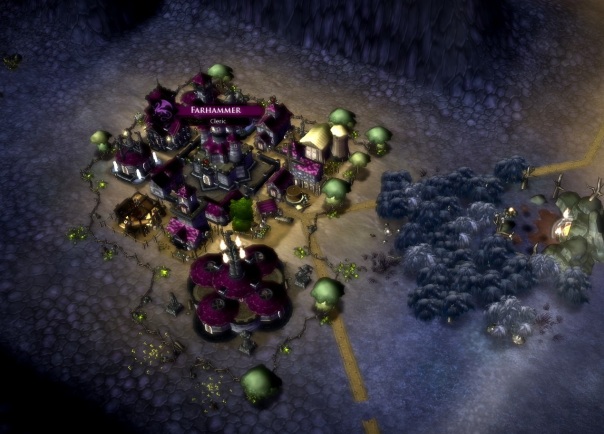 A whole mess of changes are soon to come. Gilden swears vengeance and sends many armies to retake their prize colony, but most of them must travel through the Empire of Resoln’s boundaries and end up continuing the war there rather than troubling Magnar. The Empire of Resoln is impressed that Magnar would take their side in the Resoln-Gilden War, and offers a heap of gold for a trade agreement (stuff it, Eubulides, 17 gold pieces is still a heap). With our territory more secure than ever, even the weakest of Magnar’s cities are able to focus on growing.

And what of the population of Farhammer? Well, let’s just say that Magnar has his ways of keeping local populaces — even unruly ones — in line. 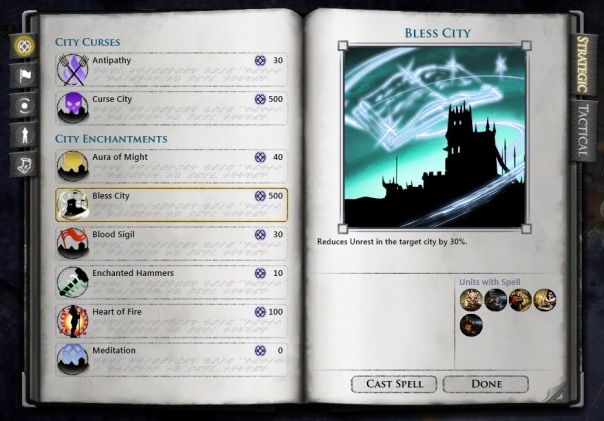 An excerpt from Magnar’s spellbook.

Next time, the Gilden will lose much, much more than just one city.