← Talking About Games: Excavating Memory
Space-Cast! #20. The Acts of the Interviewees →

City of Something, All Right

With Detective: City of Angels, Evan Derrick wants so badly to channel L.A. Confidential. Book or film, take your pick. The same goes for Chinatown and The Big Sleep. Anything noir, really. I’m not sure what else he could have done to say so. Stash a pack of unfiltered cigarettes beneath the box insert? Bribe your dame to go full femme fatale? Call the game master a Chisel? Oh wait, he did that one.

As with any setting as starkly drawn as the hardboiled genre, City of Angels runs the risk of slipping across the line from pastiche to parody. By now, the tropes have calcified into the bones of American fiction. So thorough is their digestion that certain notes are America. What does Derrick do with those bones?

He makes one heck of a detective game.

There’s a good chance you’ve played a game about doing detective work. If not, there’s an even better chance you’ve watched, like, one episode of a TV show. Here, the fundamentals go largely untouched. Every scenario, of which there are nine, opens with a briefing. So-and-so has turned up dead. Here’s the crime scene. Here are a few witnesses-slash-suspects. The candlestick seems to have come from a different locale. Go, and solve.

Turns are dead simple. You get four actions. One of them lets you move. Another lets you search whichever seedy hotel or suspiciously clean mansion you’ve arrived at. The big one lets you ask questions. But we’re getting ahead of ourselves.

Point is, there’s a good reason for the basic getup. It’s essential for all the curveballs City of Angels will soon throw at you. It’s easy to see how Derrick could have gotten carried away. Instead, the game hurries to get out of your way like an injured private dick hustling to take cover from a hail of gunfire. For such a massive package, setup is surprisingly quick. Instead of a dozen little trackers, the map is uncluttered. Unlike its similarly-named peer, there are no computers. What’s a computer, anyway? You’ll be scratching out clues and hunches with a pencil on paper, the way God intended.

The first hint that City of Angels isn’t quite like its siblings is the fact that it isn’t about teamwork, at least not unless you’re playing the cooperative mode, which feels as tacked-on as a third thumb. Around here, it’s every detective for himself. Or herself. We’ll circle around to that. For now, the crucial detail is that detectives are reluctant to work together. The big promotions and Hollywood consultancies go to those who make headlines, so pesky details like “filing reports” and “turning in evidence” tend to go overlooked. When you stumble across some material evidence, you pick it up off the track, pocket it, and declare that you’ll make it public in three days. Remembering when you’re required to turn over evidence is one of the game’s sparse trackers, and sometimes it’s as aggravating as the one counting down to when the case goes cold and the Chisel wins. 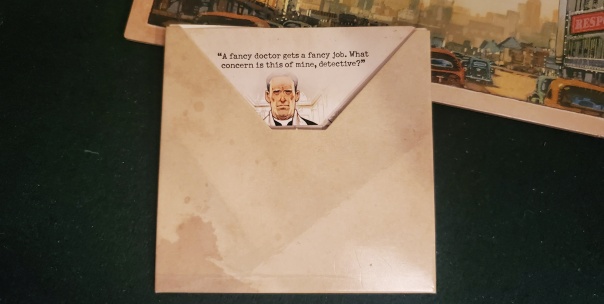 The highlight of the game is its questioning system.

Ah, yes, the Chisel. Along with the game’s uncooperative nature, City of Angels births an actual foe for its detectives to struggle against. The Chisel isn’t anybody in particular. Not a named character, at any rate. Think of them like an avatar of cold cases. When a detective announces they’re searching the tire shop of the deceased’s husband, it’s the Chisel who searches through the deck and hands over the proper card.

Lest you think their role is entirely administrative — although it’s very administrative — the Chisel also takes the lead whenever a suspect is questioned. They have their own booklet that functions like a teacher’s handbook, crammed with answers and examples. Ask a question and the Chisel cross-references the interviewee with the line of questioning and then feeds you an answer. As a system, it’s bare-bones but functional, limiting your questions to things like, “I ask Joe Schmoe about card F,” which sounds ridiculous but lets you keep secrets from your fellow detectives.

More importantly, the Chisel might lie. This is a whole thing. Every character always has a “best” answer from among the options presented to the Chisel. They hand over the suspect’s answer and you’re forced to choose: Do you believe them? Or should you press for more info? Catching a suspect in a lie means you’ll gain leverage over them, guaranteeing an honest answer in the future. Honest-ish, anyway. Their “best” answer might still stand along the lines of, “I didn’t see anything, you moron!” The flipside is that pressing a suspect at the wrong time means handing over leverage to the Chisel — leverage on yourself. The Chisel can then spend it to disrupt your investigation in the future.

Brilliant. Also, maybe not quite enough. Questioning suspects is the bleeding red meat of City of Angels. Despite all the traveling and searching and the other stuff, there’s no solving a case without enough jawing to give your poor detective an aching TMJ disorder. And the way it’s presented is nothing short of a delight. Answers are passed between Chisel and detective via a slotted envelope, giving each interaction a sense of illicit secrecy. Rival detectives can pay a snitch to eavesdrop on the conversation, albeit in a way that doesn’t always feed them everything that passed from the suspect’s lips. And then there’s that uncertainty! Hesitating over whether to press a witness or leave them be is a flashpoint that City of Angels wisely returns to twenty times per session. It’s tense every time.

It also soon grows wearying, especially for the poor Chisel. They never quite escape the suspicion that they’re a gussied-up game master, here to make sure everybody else has a good time. Unlike the game master in an RPG, this isn’t their story. They’re here to turn the pages and pass out the folders, and occasionally choose which branch of dialogue you’ll climb, and sometimes the tedium stretches to the breaking point when multiple detectives request the same information one after the other. Part of the problem is that their options for disruption are limited to questioning and nothing else. Either they have a suspect tell you to go screw, at which point you can hire a goon to tenderize them and get them talking again, or block a snitch from reporting back to their detective. These can absolutely make a difference when four detectives are within breathing distance of cobbling together perp, weapon, and motive, but if they’re sturdy enough tools to prevent anyone from solving the case before it goes clammy, I have yet to see it happen. 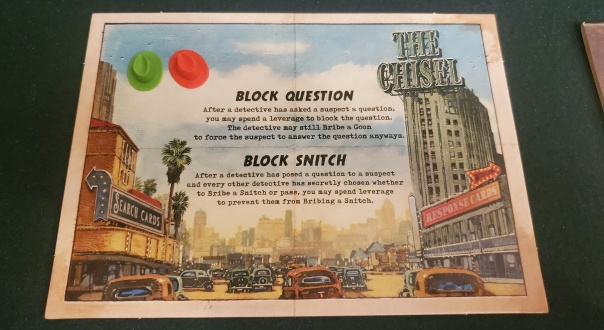 That’s a big board for such a little nun.

Where the role of Chisel is ingenious but not always enjoyable, the game’s approach to police corruption reads like paratext in its own right.

Let’s be absolutely clear: I love how the detectives are presented. They’re reflections of Los Angeles itself, shining apples with a coil of worms at their cores. While their careers see them chasing leads, their work demands the occasional stop at mob locations to gather “scratch.” These payoffs are used to bribe coworkers for a peek at their overdue evidence, beat some sense into tongue-tied witnesses, or fund snitches. These go a long way toward selling the idea that you’re not only a police detective, but the sort of specimen that would feel right at home in a Philip Marlowe novel. Even the lightest smear of grime helps sell the idea that you inhabit a dark, unpleasant world.

At the same time, the game presents a vision of 1940s L.A. that’s often jarring in its incongruence, both excessively violent and forward-thinking at the same time. It isn’t that I want “realism,” exactly. All too often, demands for realism are really demands for some imagined status quo — say, by erasing women from occupations they historically held or wars they actually fought in. Rather, I worry that by stripping out the ugliness of the period, the racism and sexism along with the violence, that the leftovers begin to seem palatable no matter how far they are past expiration. What’s the problem with a little police brutality when it serves justice in the end?

Like noir itself, perhaps this more of a commentary on American culture than City of Angels itself. It’s hard to imagine what this game would look like had it gone all the way. Are we ready for a board game detective story about pinning a crime on somebody innocent? One that includes racial profiling, abuse of women, and sexual assault? That valuates justice beneath self-advancement, or closed cases above honest work? I suspect not. At the very least, it would be a gamble for anybody hoping to produce a commercial product. Derrick draws the line at violence and theft. In the process, mob kickbacks become an important tool of detective work, as essential as interrogation and patdowns. For crooked cops, we sure are diligent. The system may be corrupt, the game seems to say, but that corruption serves proper ends.

Sure makes for a devilishly good time, though.

Hello! Are you interested in a subscription to Boys’ Life Magazine?

Here’s the real kicker. I’ve played enough detective games to last a lifetime. There isn’t a twist I haven’t rounded, a knot I haven’t unpicked. Red herrings? I can spot ’em a mile off. Still, Detective: City of Angels pulled me in. It’s only seedy for a board game, but that’s twice as seedy as the last detective game I played. The Chisel is a big part of that, offering deceptions at exactly the right moments to nudge the detectives off track. There’s nothing like the personal touch.

For all its missteps, it feels great. Questioning suspects, pocketing crucial evidence, dipping your big toe into the underbelly of the city — but no more! — these generate a feeling of place that’s all too rare. It’s been commented that a good setting is a character in its own right. That’s the case here. Los Angeles might not be a city of angels, but you can smell the cheap booze on its breath and feel the humidity itching under your collar.

Posted on April 26, 2022, in Board Game and tagged Board Games, Detective: City of Angels, Van Ryder Games. Bookmark the permalink. 3 Comments.

← Talking About Games: Excavating Memory
Space-Cast! #20. The Acts of the Interviewees →