When You’re Not Stalin, You’re Russian

Don’t make the mistake of calling Dual Powers: Revolution 1917 a wargame. I learned that lesson the hard way. Like 13 Days: The Cuban Missile Crisis and Fort Sumter, Dual Powers is about what happens before the war — in effect, a pre-wargame. This is the jockeying, the shakeout, the period when everybody decides who they’ll sidle up to when the shooting starts. Even better that Brett Myers has selected a topic I’ve yet to see explored. With the February Revolution out of the way and Tsar Nicholas II off the throne, Petrograd has settled into an uneasy truce between the Provisional Government and the Bolshevik Party. Surely such an arrangement will last more than a few months.

There’s often a question in designing wargames — pardon me, pre-wargames — of how closely one should hew to the historical record. To give an easy example, do you offer the Germans a fighting chance of winning the Battle of the Bulge? Or do you simulate the feelings that existed in the moment, the panic and disarray and surprise of the Allied forces? Strict accuracy is more honest in one respect, reflecting the companies and their compositions, the troops that linger out of sight beyond the boundaries of the current map, the inevitability of the Reich’s collapse. But there’s also an argument to be made for verisimilitude, the approximation of truth rather than the full realization of it — that either side could have won, because before the bean-counters and historians got their mitts on everything, nothing was certain because certainty isn’t a property of reality.

One of the immediate qualities of Dual Powers is that it never once occurred to me to question whether its growing conflagration was too much historical accuracy or too little. Oh, it’s a game through and through, complete with wooden pieces representing a smoking barricade over a bridge and a fist gripping a hammer. But in addition to being a supernal game, it’s a compelling representation of two forces locked in proximate combat, acting openly but not too violently, with nowhere else to retreat to because, should Petrograd be lost, so too shall be the ensuing war.

With a hand like this, I must be stallin’.

There are any number of reasons why it succeeds. The most visible are the cards and the counters, representations of White and Red authority. The crucial detail is that while both sides are represented, so are the people in the middle, green tokens spread across the game’s six districts, minor enough to occasionally overlook but stern enough to reward those who pay due diligence — exactly as neutral populations should be treated. These forces align with whichever side commands the “will of the people,” whatever that means here or has ever meant. Naturally, the will of the people is only one consideration among scads of them. How many? Let’s count.

First, a card is possibly a secret objective. There are three per round, one assigned at random — along with which of the city’s connections will be barricaded — and, much as in Twilight Struggle or 13 Days, these objectives may be met by either side even if they weren’t the one to assign them. This adds some understated guesswork to the whole thing. Do you dare glance at the location of your own objective, let alone whip up the masses into a frenzy? Are those yowling crowds in the industrial district a symptom of your opponent’s machinations, or was he merely holding cards that happened to deploy there?

Speaking of which, cards are also the source of your troops, and moreover how you move them around the city or replenish them after a brawl. This is their principal function, recruitment and propaganda and early twentieth-century cancel culture all at once. Except in this case, the thing being canceled is the Provisional Government and the Romanov family. I’m not being flippant; one of the things Dual Powers does so cleverly is that it puts names to faces, and further attaches significance to both. Lenin is the Bolshevik Party’s hard hitter, either swinging the will of the people in his favor or showing up personally to sway districts almost single-handedly. Prince Lvov is the prime minister, able to use his contacts to expose the opponent’s objective. Stalin is proficient at stallin’ — literally, since he can move the barricade marker to prevent opposing reinforcements from interrupting your demonstration. Trotsky is the guy who shows up partway into the game, waffles over which side to join, and decides at halftime that he prefers the color red. These are more than just names. They’re cards that might become counters on the map or allow special powers. Not unlike your other cards, except these make their presence known rather than disappearing into the discard pile. These are the names that will shape the coming months just as they shape your entire strategy. 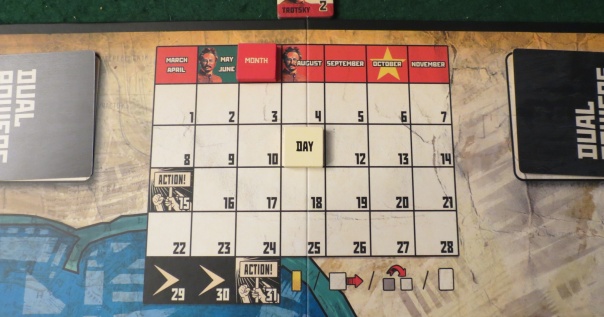 It would be impossible to continue without discussing the calendar. This is the single smartest thing in a game filled with very smart details. The gist is that every card consumes a handful of days, anywhere from one to eleven. When you play a card, you also tick through the calendar, days turning into months turning into the end of the game. Not too exciting if this were nothing more than a variable turn tracker, but Myers goes one further. If the card you played lands you on certain days, you get a bonus action. Nothing major — a single pip of reinforcements, maybe a small move, an extra card. But over time, the side that carefully times their calendar advancements will find themselves pulling ahead. Mobs in the right places, bellies full, a hand of cards affording extra options. Small steps make great journeys, and all that.

Soon enough, it clicks: these bonus days aren’t only present for gameplay reasons. Yes, they’re significant there, too, forcing you to consider the spacing of your cards. But they’re also emblematic of something important in real-world politics, an abstraction of how particular days can be leveraged, taken advantage of, used to keep an opponent on the wrong foot. Think of the Tet Offensive in 1968, when the Vietnamese lunar holiday screened a surprise invasion. Think of the June 2015 terrorist attacks, undertaken during Ramadan. Think of the strikers out for International Women’s Day on 23 February 1917, and how the Bolshevik revolutionaries mingled with the crowds, whipped them into a fury, and unseated the Tsar when his garrison wouldn’t fire on civilians, bringing us right to the start of Dual Powers. Conflicts aren’t won on zeal alone. They’re won through superior planning. The calendar is what bakes that into the entire design.

The solo mode is fine, but sheds much of what makes the regular game so compelling.

Cards that represent both the faceless masses and the individuals who will alter the course of history. Loyal followers and the neutral agitators who need to be told which charismatic leader to follow. A calendar system that prizes careful planning and rewards those who know when to spring a surprise. Sum these elements and you get something special. Dual Powers presents its claustrophobic battle for control, appropriately, as a claustrophobic battle for control. Its principal virtues are showmanship and planning, and it’s no mistake that these are the same traits exhibited by its most influential figures. Where do you send your mobs? Where your opponent doesn’t want you. Where do you seize control? In the district where your forces are only marginally superior to those of your enemy. When do you push, pull, reinforce, yield, bully, or feint? Wherever you need to. Dual Powers, like the revolutionary period it evokes, is driven as much by reflex and instinct as it is by conniving.

My sole complaint is found in its smallest details. White counters begin strong and eventually atrophy; Red counters do the opposite. Petrograd is arranged around six districts. Kornilov, when exhausted, drops from strength two to a disheartening negative one. Stalin is a pushover compared to Lenin. To be clear, these aren’t gameplay problems — they’re textual omissions. Designing a game about history is itself an act of writing history. With that in mind, I would have loved for Myers to include two or three pages of his reasoning behind these design decisions. I imagine the Reds grow in strength thanks to a galvanizing base, whereas the Whites struggle to maintain the public’s enthusiasm for a lackluster Republican experiment. That’s only a guess. Whether Myers was thinking the same thing is a mystery. Although a few cards note the identity of the major characters and offer a short timeline, a game this smartly realized deserves to have its thesis stated. 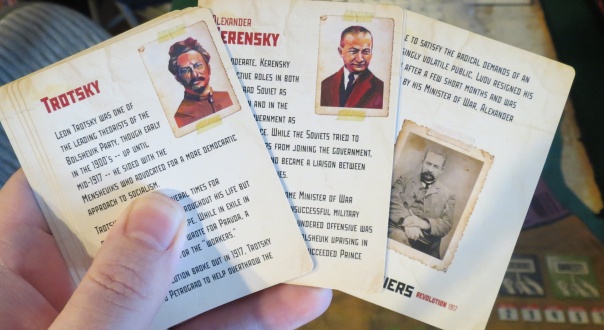 Maybe this isn’t a big deal to some, but I would contend such details rest at the heart of a game like Dual Powers. This isn’t only a game with slick multi-use cards and a pitch-perfect hog’s wrestle for a city in turmoil. This is also an eminently playable expression of how that historical struggle played out. Abstracted, true, but with careful infusions of plausible consideration. This particular model has been built for play, but it’s still a model worth examining.

Thankfully, its best moments are clear enough even without a definite statement. Between its sharp card-play and the needs of its calendar system — and most of all, the way it ties these directly into the history it hopes to evoke — Brett Myers has created something truly worthwhile.

Posted on March 12, 2020, in Board Game and tagged Board Games, Dual Powers: Revolution 1917, The Fruits of Kickstarter, Thunderworks Games. Bookmark the permalink. 11 Comments.