← When You’re Not Stalin, You’re Russian
Dale of Deck-Builders →

Fred Manzo’s Escape from Hades isn’t what I expected. So much not what I expected, in fact, that I can’t quite remember what I expected in the first place. Certainly something fluffier, something reflective of its radioactive candy-corn cover. Maybe something that didn’t require quite so many gut-checks and mid-play rulings. A handful, sure. After all, this was brought to life by independent publisher Hollandspiele. But this many? This often?

What I expected least, however, was that in between the neon surface of the Hades and too many clarifications resided a story generator as daring and dashing as a WW2 commando film.

Assaulting the surface of the Hades.

“Our princess is in another castle,” the briefing may as well declare. Except in this case, Princess Emily is aboard a starbound castle named the Hades, a cylindrical prison barge crewed by devious Nastians — not to be confused with nasty Devians, the rules inform us. This isn’t the last time the rulebook will crack wise, nor the last time the game’s tone will hover in the nebulous interstitial between “wargame” and “slapstick comedy.” You command a crack squad of heroes ready to descend onto the surface of the Hades and penetrate into the prison below. You also command a hapless scientist named Professor Dante who will probably teleport himself to an alternate dimension by accident.

Right away, this brings both my primary appreciation and foremost complaint bubbling to the surface. The good news is that Escape from Hades nails the split-second timing of a three-part commando raid. The bad news is that it’s never quite sure whether to have you reread how an assault squad’s rocket boots function or engage in some hijinks when you send that squad hurtling to their doom across the ship’s steep horizon.

The attack on the Hades is a battle told in three parts, each portion layered atop the others. The surface, called the Inferno deck, is where your squads touch down, blast some gun emplacements, and gain access to an elevator. The lower level is Purgatory, where you’ll dodge patrols as you creep from room to room in your search for Princess Emily — and possibly a teleporter for a hasty escape or some loot so the team can balance their expense account. In the vacuum overhead, your ship, the Vittles, pulls g’s and slings superheated lead until everybody is strapped in and ready to put the Hades in the rear-view.

Crucially, these segments don’t exist in isolation. Not only are these stories told simultaneously, but they also impact the others during the telling, weaving small moments into a grander tale of rescue, sabotage, and escape. Squads on the Inferno deck will find themselves taking potshots at overhead fighters and distracting guards before they can hitch a ride down to the prison. Down on Purgatory deck, scouts and freed captives uncover control panels and ammunition caches, detonating surface installations or delaying patrols. Out in space, the Vittles circles around to strafe those shock troopers threatening to flank your rearguard. And squads move between all three theaters, hitching rides on elevators to break past a cluster of Nastians or teleporting into your ship to do some science.

Much can happen with these three slender decks.

When it works, these adventures come across as individual scenes from a theoretical science fiction film that has never been granted the studio green light despite a firecracker script. Your scouts get cornered, only to be rescued in the nick of time by armored infantry. Engineers brave blistering fire to detonate that pesky railgun. Someone opens a cell to reveal a trap, locking them in place until Princess Emily’s personal guard, freshly liberated themselves, sprints over to deactivate the lasers. Just as often, things go horribly wrong. A Nastian switches its patrol schedule and trips over that alien elder you were rescuing, painting the wall a fresh shade of green goo. A barrage of rifle fire accomplishes little compared to enemy rayguns, slagging your troopers on what you had supposed was a sure-thing gambit. Missiles spin wide of enemy fighters. Professor Dante teleports himself into the hell dimension and tears out his own eyeballs. Again.

What’s the difference between triumph and failure? Not much. The flip of a card. More often, a sequence of flips. Rather than having you roll dice, Escape from Hades uses three decks that serve much the same purpose, even sometimes to the point of featuring the imprints of dice in the bottom corner. Combat sees you comparing a row on the attacker’s card against a row on the defender’s card — as simple as it is capricious. Every round also has you draw a “nasty surprise,” which is like an event card after a decade of hard training and extensive blood doping. Rather than reveal one twist of fate, these are the cardstock equivalent of five uppercuts to the gonads, spilling new installations onto the surface, switching patrol routes, bringing busted guns online, and much more, sometimes all at once. The same goes for the contents of those basement-level cells. Although you know Princess Emily and a few other guaranteed rooms are onboard somewhere, you’re otherwise running blind. Certain scoring criteria, like loot to steal or alien elders to rescue, might not be present at all. 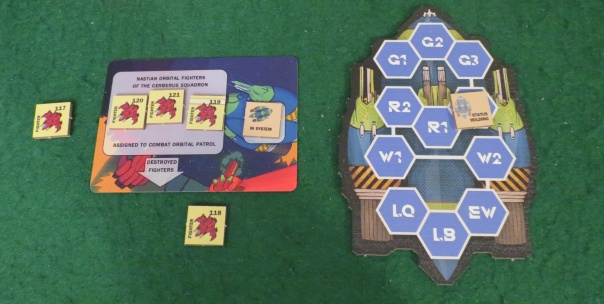 The more significant issue is that Escape from Hades doesn’t always feel the need to explain all the rules. For example, your squad leaders can attempt to contact the Vittles to drop off additional support. This is a risky move, consuming the leader’s entire action and chancing a draw that might not pay off, presumably because the Vittles is currently being Swiss-cheesed by Nastian cannons. But when it succeeds, new troops are delivered. Can they act immediately? One’s instincts would say no; in theory, you could bring in a squad leader who then immediately calls in additional squad leaders, on and on until you’ve got the entire Galactic Fifty-Third hogging up the surface of the Hades. It’s only logical that fresh troops are arriving at the “end” of your actions and are therefore unable to act. But that’s a leap of logic entirely in the player’s mind; one of the purposes of board game rules is to obviate the need for such deductions.

Same goes for other little details that existed in Manzo’s mind without making it to paper. When Nastians brush up against your units, they’re “engaged” until one or the other party is eliminated. But what about when they sense a nearby golden idol you’ve lifted from their vault? This forces them to beeline to your location within a certain radius — but does this change their facing for patrol purposes once you’ve moved away? For that matter, once engaged can your forces make a hasty egress in the first place? Don’t check the rulebook. The best you can do is make a call and stick with it.

My plexiglass was insufficient.

To be clear, one of these is a complaint and the other isn’t. Incomplete rules are a cardinal sin, but capriciousness is flavor, in particular when the resultant action hums along so thrillingly. In one game, my troops breached an elevator and then split into two groups, the first fighting on the surface while the others tiptoed through the prison, opening cells and fleeing from deadly patrols. On one occasion the Vittles was forced to jump to safety for repairs while my surface crew took down additional emplacements and secured a second elevator so the rescue team could return from the depths. Reunited, the Vittles made touch-and-go maneuvers to rescue our boys — and, in the end, was forced to leave some behind so it could escape before it was transformed into the Hades‘ latest satellite of debris.

This battle had a little bit of everything. Noble sacrifices and blustering incompetence (thanks, Dante), large engagements on the surface and tense moments in the caverns, near-disaster and ultimate success. The bookkeeping nearly overwhelmed the final turns, a common occurrence when more and more Nastians emerge from their lair below and require individual patrol movements. But it’s never so much that I couldn’t figure out what I should be doing. Or make the decision myself, when the rules failed to.

It’s a slight miracle that Escape from Hades functions as well as it does, but there it is. Each of its conflicts would have been too small in scope; together, they become far more than the sum of their parts, evoking a rescue mission that can go wrong in a dozen small ways. It reaches a point near the end, when your troopers are ragged but have a plan for escape, when you’ve stopped the suicidal medusa alien trying to prematurely self-destruct the Hades, when hope has been lost but seems capable of being found again, that it clicks into place. Despite its missteps and omissions, Escape from Hades is pretty darn close to the Dirty Dozen. And although it tends to tell that same story on repeat, hey, it’s a great story, comedic and dramatic in equal measure — at least when the script plays along.

Posted on March 17, 2020, in Board Game and tagged Alone Time, Board Games, Escape from Hades, Hollandspiele. Bookmark the permalink. 1 Comment.

← When You’re Not Stalin, You’re Russian
Dale of Deck-Builders →