It’s the Age of the Hybrid. Fair enough. Got a spare mechanism? Cram it in there. Shove something else to the side if you need to make room. When you’re finished, your deck-building set-collection roll-and-move dexterity game won’t only be named everybody’s game of the year, but game of the millennium, going down in history alongside Senet and Chess as the most likely to be extracted from a garbage dump by alien archaeologists.

Except here’s the thing: you’ve got to make it stick. Like stitching together body parts from a dozen “donors” to create a companion for Frankenstein’s Monster, your creation needs to walk and talk and probably shag. And none of that is happening without functioning ligaments and tendons and everything else that puts a body into motion and keeps it from sloughing apart after a handshake.

Want a negative example? There are few finer than Abomination: The Heir of Frankenstein.

For the most part, Abomination’s framework — the bones, if you will, over which will be draped layers of muscle and adipose and dermis — bear the appearance of a worker placement game. Not any worker placement game. Right away, you’re treated to constant reminders that the game’s release was timed to coincide with Halloween: corpses in various states of decomposition scattered across the board’s approximation of Paris, dismembered limbs and torsos strewn wherever you emptied the baggie, hirelings boasting names like “Dog Catcher” and “Hospital Thief” down at the docks. Even the characters with their variable powers won’t let you forget it. One of them, the psychopath, even makes good on his diagnosis by ignoring the “humanity” dial altogether. Each player has three dials, in case you were wondering: humanity, reputation, and expertise. The psychopath is totally numb to one of them. Appropriate.

There’s even a pair of much-appreciated twists. Like most worker placement games, the progress of any given round takes the shape of a funnel. Early on, your workers have the run of the town, perambulating over to whichever destination holds something worth snatching up. Usually these hotspots are relatively apparent: the lectern or research stations at the academy, good for making some coin or learning the latest tricks; the public square, hospital, and back alleys, home to the freshest corpses; the docks, at least when the right ruffian is looking for work. More than that, you have two different levels of worker. While the best spaces are reserved for your scientists, your assistants are more limited, perhaps because they’re small and likely orphans you’ve bullied into service. As always, the prime destinations are claimed early, leaving everybody’s orphans grappling for space in the later stages. No need to prioritize dog scraps or digging through the cemetery when the hospital is chock-full of those who have recently passed from consumption.

But in addition to having two types of workers, you also have the ability to bribe somebody off a space. This isn’t totally ideal, mind you. For one thing, it costs money, which goes straight into the pocketbook of that worker’s employer. For another, you can only do this a few times per round before all the “bump” spots are taken. A slight dent in the funnel, but minor compared to the careful management of your employees in the first place.

If this sounds grim, it is, right down to its pickled liver. According to the fluff, Frankenstein’s Monster is back from retirement and looking for a companion. The original Frankenstein, the one who insisted on everybody calling him Doctor, has gone the way of all earth. The task therefore falls to the madmen (and madwomen) of Paris to assemble Franky’s heir.

Don’t let this conjure images of skulking through the streets, throwing electric levers, and screaming “It’s alive!” while backlit by lightning. Although all of those things are possible in abstraction, most of your task revolves around the aforementioned corpses. As fate would have it, suturing together a monster isn’t as easy as it sounds. Each part must be carefully built from scratch. And that requires two things: one, enough expertise in anatomy and barbering to know the difference between a thumb and a big toe and, ahem, another important digit, and two, lots and lots and lots of body parts.

Like, lots and lots. No, more than you’re picturing. More… more… okay, maybe not that many, sicko.

Where the worker placement of Abomination was serviceable, even interesting, this is where the first swell of queasiness settles into the belly. Not because of the body parts, since surely you bear a stern constitution. Rather, because this process has all the unpleasant fiddle of sorting an anatomy classroom’s worth of body parts into the morgue refrigerator after the local medical school’s dissection spree.

Here’s the gist. Whenever you claim a cadaver, you’re presented with a choice: tinker with its innards to increase your expertise or lop it into segments for body parts. Cadavers come from a few different sources, which naturally means they also provide various levels of freshness and actual usable parts. While a body that’s recently died — whether from a hanging, disease, or your own blade — provides everything, earthworm food from the cemetery yields the usual muscle and organs, but they’re probably also aromatic enough to make your vision swim.

And each tidbit requires its own form of care. Bone never goes bad, at least within the timeframe offered by the game, so you’re free to stack it in the corner of your lab. Muscle and organs gradually decompose, decreasing the points you earn from stapling them together to form limbs and faces. Blood goes bad almost immediately, forcing you to put it to use as soon as possible. That or drain a few extra liters from your orphans. And animal parts are basically wildcards. Very handy until you remember that they also decrease the, ah, integrity of your final product. Dog legs might make for a faster freak, but that’s not precisely what Frankenstein’s Monster ordered.

At times this process works just fine. Digging up corpses and deliberating over which to chop, which to harvest, and which to throw back — certain bodies ding your humanity for reasons unknown — well, it isn’t bad, exactly. Rather, it’s burdened by irritation. Not only are you moving loads of cubes back and forth, ignoring the publisher’s inability to provide enough bone cubes for everybody, and doing your best to never bump the table for fear of spilling your freshness trays together, but you’re also taking care to limit yourself to only fifteen bits per tray, store enough muscle and organs to sell at the market to feed the indigent and earn some coin, and maybe buy ice to keep everything cool a while longer. 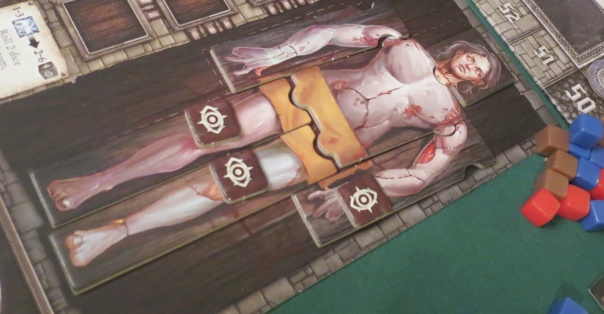 To be clear, the problem isn’t just that all these details and consideration and limitations pile together. It’s that they don’t translate into interesting decisions. It’s bookwork. Accounting. Balancing a ledger. Except in place of dollars you’re trying to work out if you can afford two legs and a head, while also trying to increase your expertise to stretch skin over an arm, while also balancing a real ledger of in-game money, while maybe forgetting that too many workers have already been bribed and thus you won’t be visiting the kennel for extra dog stomachs. At the very least, it’s possible to begin your turn while somebody else puzzles over the three cadavers they just dug up. But there’s no repairing the tedium of everybody reassessing their grocery list every time somebody deploys a scientist to work at the hospital.

And then Abomination has the gall to undermine everything you’ve accomplished.

Picture this. Over the past hour and a half, you’ve amassed a medieval plague ditch of body parts. You’ve assembled a new body over multiple stages, first muscle and bone, then blood and skin. In the meantime, you’ve been fiddling with research cards and the occasional dalliance with atonement down at Saint-Roch. You’ve forgotten and remembered and forgotten that there are also random objective tiles to pursue, and gotten wrecked by at least one ill-timed event. Now for the crowning moment: jolting your monster to life with bottled lightning. Provided you remembered to buy the bottles, anyway.

By this point, you’re barely even playing the same game anymore. While anyone tailing you in monster construction is still lugging bodies back to the laboratory, you’re charging Leyden jars and getting ready to roll a fistful of dice. Yes, dice. The goal is to zap your monster, but not too much. When you roll, each lightning symbol zaps a body part. One zap is necessary, two will downgrade that part, possibly even wiping it off your table entirely. Only after a finished part has been zapped can you wake it up. Repeat six times, once per body segment, without over-zapping and thus forcing yourself to rebuild that limb, and your monster will end the game.

Not that you win, necessarily. There are still points from a half-dozen sources to tally. Much of the time this is a formality, since the lion’s share of your points are earned in the operating theater.

But that’s emblematic of a game that’s as stitched-together as its subject matter. Points can be scrounged from every corner, but most don’t matter. All that thunder, no lightning. Or rather, all that lightning, no undead monster. Abomination even teases an alternate ending without bothering to actually provide it. Rounds are tracked by the approach of Captain Robert Walton, seeking vengeance for the death of his pal Victor Frankenstein. Rather than melting all the ice blocks in the market (maybe that’s too subtle a joke), he’s chasing you… and then his arrival awards a measly five points to the player with the highest humanity. No bloody revenge torn from the cruelest madman. A pat on the head for the nicest body-snatcher. Ho hum.

Lopping up bodies for science and profit.

There are other problems I haven’t even touched on. There’s the wild divergence of the game’s research and humanity cards, the characters who ignore entire game systems, the detours into the rulebook to read snippets of narrative that could have been compressed onto the event cards for all the heavy lifting they do. Is it a requirement that every title from Plaid Hat feature a storybook? In this case, it’s about as useful as sewing ears onto your monster’s knees.

Then again, at least that would constitute a decision. Far too often, Abomination: The Heir of Frankenstein isn’t interested in such notions, or at least in letting them matter. With all the elegance of a piecemeal golem it lurches from one notion to the next. And while some of these ideas show a spark of brilliance, like the slow decomposition of your materials, it fails to care for how everything fits together, with all that early accounting soon crumbling at the whims of the dice. Its stitched-together nature might be considered appropriate given its subject matter. I would return with some similarly appropriate advice: when encountering a monster animated from castoff limbs, take the long way around.

Posted on October 14, 2019, in Board Game and tagged Abomination: The Heir of Frankenstein, Board Games, Plaid Hat Games. Bookmark the permalink. 12 Comments.