Look, I know how it sounds when I say “the box is the best thing” about a game. I know. It sounds dismissive. Like I’m saying the game should be jettisoned into space, where it would finally be put to good use as a hostel for tardigrades. Like I’m saying you should buy the game, toss the components and burn the rules, and then display the hollowed-out box on the mantelpiece as a warning to all who enter that they should not buy this game unless they’re connoisseurs of fantastic boxes.

That’s how it sounds. Too bad. The best thing about Tiny Ninjas is its box.

The box really is lovely.

At first, it doesn’t seem like there’s any way to open Tiny Ninjas. The front, back, and four sides of the box are easily identifiable for the usual anthropological reasons — namely, the title is on the front alongside colorful marketable art, the back displays the game unfurled with cards and dice, and the sides look like sides. Anyone with a master’s degree in twenty-first century (CE) board games could identify as much. But where is the lid? Where’s the usual farting noise made by the inhalation of air between the nearly-airtight slats of cardboard?

Magnets, you realize. The box does not have a lid. It has a flap. And it’s held in place with a magnet under the cardboard, like a biohacker with neodymium discs implanted beneath their fingertips. Instead of a box fart, it shuts with a muffled click, the mating of north and south, the sound of satisfaction.

And that’s nothing compared to the box when it’s open. Most box lids serve no purpose other than to get lost somewhere in between game setup and breakdown, much like keys in between coming home and leaving again. That or to clamp around the box-bottom with all the enthusiasm of a lamprey, impossible to pry apart where previously they slid asunder with the slightest oomph and a bit of flatulence.

Not so, here. Apart, you see, the box of Tiny Ninjas works its magic. Additional cardboard slats are fitted into place to keep the jaw from snapping shut under magnetic impulse, health and ability trackers are slotted into grooves like teeth inserted back into their sockets, and there you have it: dice tray and accounting alike, all in one place, clear and indefatigable. The very epitome of board game box design. The tranquility of Annihilation, the rapture of the Pearly Gates. Writ in cardboard.

Tiny Ninjas as a game is okay, too.

Attack! Defense! The essentials of ninjahood.

The basics you will have heard before. You have ten health. So does your opponent. You want to drop them to zero health. They want to do something uncannily similar to you. Fortunately, you have an entire whisper of ninjas at your beck and call. Unfortunately, so does your rival. In Tiny Ninjas, ninjas come as cheaply as bad board game boxes.

But before you dismiss Tiny Ninjas as all about that box, you should hear the best part. Nay, the best two parts.

First, Tiny Ninjas is a dice game. Each card shows an attack performed by one of the titular tiny ninjas. These feature a wide range of abilities: red damage, healing, blue damage, defense, more damage, gambling damage, and damage that might hurt you instead, which is technically another form of gambling damage. In other words, lots of damage, with a few sprinkles of healing thrown in to keep the game going longer than it probably should.

However, you don’t merely play a card. Oh no. When you play a card, you must also roll a die. Just one, either the shuriken die, with its three colors and six numbers, or the kunai die, with its binary black/white and three numbers. These dice are at the heart of Tiny Ninjas’ central conceit, because every attack comes parcel with its own roll, and therefore its own odds. Is rolling the shuriken die for color likely to deal more damage than rolling the kunai die for its number? It’s the stuff of a fifth-grade story problem, but (a) that makes it great for fifth-graders, and (b) it’s important to pay attention to all those little odds, because you’re going to want to meter out your attacks carefully. 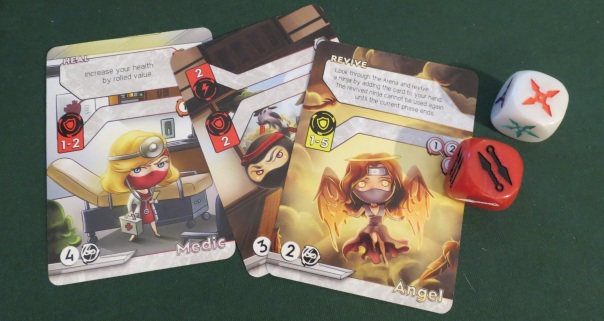 Nearly everything requires a roll. Nearly.

Why? Because of the game’s other best part: it’s a hand management game. Both players begin with five cards. Whenever someone attacks, their opponent gets the opportunity to play a card of their own to block damage before it’s inflicted, provided the defense matches the color of the attack and pending the result of their own roll. After that’s finished, the attacker gets to choose whether to attack again or to let their rival ninja have a turn.

Here’s where the hand management comes in. When players switch roles between attacker and defender, the incoming attacker refills their hand to five cards — but the incoming defender, who was only moments ago flinging attacks and dice, doesn’t get anything. Both players are therefore burdened with a classic board game conundrum. The attacker must ask, “Should I keep attacking now, while my opponent’s hand is light, or hold onto cards to defend myself in a moment?” Meanwhile, the defender is thinking, “Dammit, I spent too many cards earlier.”

For the most part, Tiny Ninjas leverages these two details to good effect. Attacks are electrifying at least once (when you roll) and possibly even thrice (when your opponent reveals a defense card and again when they roll). Its decisions are minor, but satisfyingly so. This is, after all, a game about tiny ninjas.

My only real quibble is that there are so many healing abilities that Tiny Ninjas tends to stick around far longer than it really should, like a beloved and amusing house guest who doesn’t understand what it means when everybody stands up from the table. A ninja’s life can easily drop from ten to four, then bungee back to eight, then drop to seven, then jump back up to — you get the idea. 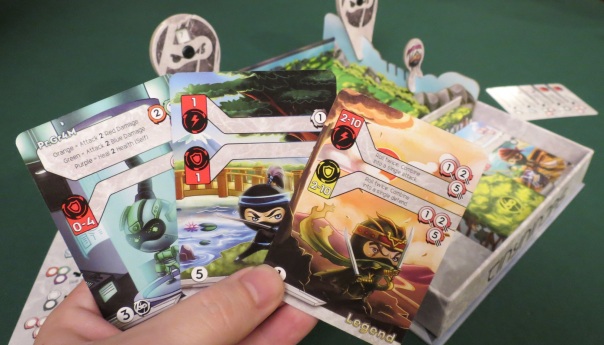 Preparing for a brutal strike.

All told, Tiny Ninjas is exactly as advertised: clever but not particularly deep, attractive in small doses, suitable for younger players, and eminently portable. For a two-person dueling game that works on an airplane, you could do worse. You could probably also do better.

But the box! Oh, that unforgettable synergy of form and function, that intermarriage of Montague and Capulet! If only every box could be this artful. Thanks to its regal poise, our next box fart will be doubly abrasive.

Posted on June 11, 2019, in Board Game and tagged 2niverse Games, Board Games, The Fruits of Kickstarter, Tiny Ninjas. Bookmark the permalink. Leave a comment.