I still remember the birthday in high school when my dad gave me a translation of Thucydides’ History of the Peloponnesian War. Don’t let that fool you into thinking I’m a purist. Adding mecha-gorgons and cyber-hoplites to the mix? That sound you just heard was me at fourteen years old, my squeal of delight echoing through time itself.

So why does Lords of Hellas leave me cold?

Little dudes on a little map.

Before the mobs batter down my door, let’s talk a little bit about what Lords of Hellas is and what it does well.

The what is the stuff that makes teenage boys opt out of puberty and instead spend all their pocket money on plastic figurines and very small paintbrushes. The gods have come to Hellas — that’s Greece — and it turns out they’re cybernetic monstrosities. So far, I am there. Humans are instantly elevated with mecha-suits and laser bows, animatronic monsters only a shade less terrifying than Chuck E. Cheese stalk the land, and heroes emerge to rally the former and repeatedly puncture the latter.

In other words, it’s a dudes-on-a-map game doing what dudes-on-a-map games do best: cramming garish plastic into a box, providing some flimsy pretext to duke it out, and letting us pretend that some rules are sufficient veneer to disguise that we’re playing with toys.

To be clear, there’s nothing wrong about any of that. Lords of Hellas knows exactly what it’s doing. Starting with your hero and a paltry two hoplites, it isn’t long before you’re shoving armies around, hoarding combat cards, and constructing even larger hunks of plastic that represent monuments to the gods, usually sporting some side-, inner-, and underboob, because it’s ancient Greece and you’re lucky that’s all you’re seeing.

For the most part, the rules do a great job of being digestible and then getting out of the way. Turns are simple, a combination of basic actions like moving a hoplite, moving your hero, maybe praying to a god if you can be bothered, and then taking a special action. These are the real meat of the game, both demanding balance — because you can only take one special action at a time, which locks it off for the next while — and some hefty prioritization. There are some bookkeeping options, like Prepare, which lets you heal wounds or draw combat cards, but most of your special actions are meaty and important. Hunt lets you engage in a little side-duel with a roving monster, Usurp leverages your heroism to convert a region to your side, and even stuff like Recruit, March, or Build can have immediate effects on the landscape of Hellas. 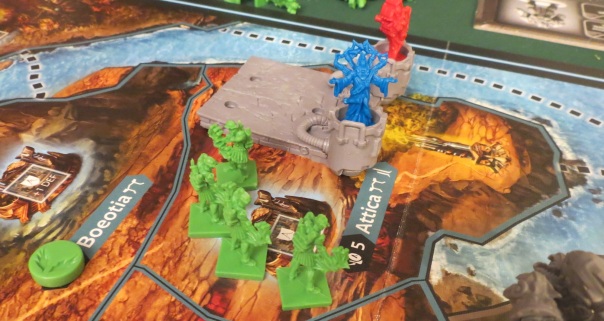 This is all in service of the game’s four victory conditions. The first three have to do with the seizing and holding of territory, requiring a player to either grab two broad “lands” (clusters of regions), build and hold five temples, or control a monument on the third round after it’s fully built. These are all classic dudes-on-maps fare, requiring a healthy number of troops, some bold maneuvering and careful preparation, and likely a bit of trash talk.

The fourth option is a mixed bag, proving both more thrilling and more knotty than the others. Whenever your hero occupies the same region as a monster, they can launch a hunt, switching away from the usual action for a beast-slaying minigame. The hero spends combat cards to deal wounds, the monster counterattacks, the hero optionally plays more combat cards to block, and the whole thing repeats until either the monster is slain or the hero is too tuckered out to continue.

These are invariably thrilling, providing either little rewards or serious injuries. Still, hunting is Lords of Hellas’s first stumble. Not only because it’s easier than the other victory conditions — although it is, by a significant margin — but because it’s far harder to disrupt. Where the other paths to victory can be pulled apart by a rival invasion or an usurping hero, your only real recourse for stopping a monster-killer is to kill those monsters yourself. But this means you’re focusing on improving your hero’s strength rather than their ability to lead hoplites or bounce between quests, at which point you might as well shut up and lop off more monster heads.

The consequence is that hunting operates like a game timer. Monsters are easy enough to slay, and they appear in high enough volume, that somebody is likely to wipe out three of the buggers sooner than later. Except the game already had a timer — monuments. Taking the Build Monument special action resets all of your special actions and adds a level to one of the map’s three monuments, creeping its owner closer to victory and increasing the rewards for praying to that god. Winning this way isn’t unthinkable. None of the other objectives are. But they’re so much more prone to enemy disruption that anyone with the right artifacts and strength can very quickly travel a road that’s irritatingly difficult to upend.

Hunting monsters for fame, priests, artifacts, and an early victory.

There are other complaints that could be levied against hunting, from the way combat cards are doled out mid-hunt to the distribution of wound slots making it weirdly easy to kill even tougher beasts after some minor preparation. Ultimately, though, this misstep isn’t a complete deal-breaker. It’s the first chink in a hoplite’s aspis.

Despite the functionality of the rules, they often resemble a collage of ideas lifted from other games without much care for how those ideas should be folded into the overall design. This makes comparison to its peers inevitable. At least two studios, Matagot and CMON, have seen the value of taking this quintessentially “Ameritrashy” genre, seeded as it is with chrome and chance, and effectively stripping out the rougher bits for streamlined “Euro” systems. The goal of this (admittedly difficult!) balancing act is a hybrid that embraces both the raw thrills of in-your-face conquest and the brooding calculations of optimizing your actions and resources. Unfortunately, Lords of Hellas wants to work in that vein without doing the necessary legwork to make all those ideas come together.

I’ll give you an example. Most of the time, building a temple provides a priest right away, plus additional priests when you work on constructing a monument. Every so often, however, building a temple also pauses the game so everyone can draft blessing cards. These are cool ongoing powers, letting you march farther, automatically kill invading hoplites, use your heroes to greater effect — any rule that can be modified or bent will be. But the draft itself is weirdly out of place, almost as though Lords of Hellas spied Blood Rage’s excellent hand drafting through the window and decided that, hey, it needed to have drafting too. Never mind that it’s barely even part of the game. 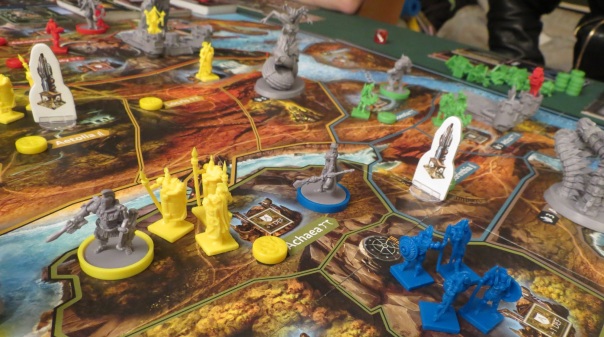 You can’t say Lords of Hellas doesn’t have stuff happening.

The same goes for combat. Battles aren’t difficult, with both players investing cards to increase their combat value but inflicting casualties on your own hoplites in the process. But compared to similar systems of incremental investment, decisions are few and the impact of defeat is often less hurtful than the sting of victory. Where are the diplomatic machinations of Inis, the all-or-Valhalla battles of Blood Rage, the subtle displays of strength of Kemet, or the over-the-top Skittles commercials of Cthulhu Wars? Those games slugged you in the nose with their battles, and provided plenty of reason to wage them. The skirmishes in Lords of Hellas are placid by comparison.

Other examples abound. Your heroes can embark on epic quests, but only because calling them flaccid quests seemed too accurate. The game is filled with peculiar little exceptions, like the sorta-temple Oracle of Delphi and the bonus recruitment of Sparta. There’s even a dash of asymmetry to which hero you choose, although their powers are shoehorns, diverting you into preordained roles rather than giving you a reason to spread your wings. The expansive but unprejudiced faction powers of Rising Sun, these are not.

In each case, these elements are either underbaked or could have been left out entirely. It’s like a doughy monster cookie. There’s plenty of good stuff in there, chocolate chunks and M&MS and some really rich toffee chips. But it’s also packed with cranberries and some weird imported nut and spongy little fruitcake bits your aunt dragged out of the freezer. The result is a game that veers between classic dude-on-map antics and puzzlement.

It might sound like I dislike Lords of Hellas. That isn’t the case. If anything, it’s exactly the sort of mess that would be a reliable hit with a certain crowd of friends, those who show up looking for a big stupid romp, get the rules 90% right, slap each other on the backs over their triumphs and defeats, and then pack it away until next year. All emotion, no introspection. In that regard, it’s one of the more faithful modern dudes-on-a-map translations, prizing big booby statuettes and bombastic vignettes over clever interactions or systems worth investigating further.

In other words, it’s fine. But one of the greats? Nah. To put it into terms everyone can understand, given enough time its legacy will be closer to that of Choerilus than Euripides.

Posted on June 12, 2019, in Board Game and tagged Awaken Realms, Board Games, Lords of Hellas, The Fruits of Kickstarter. Bookmark the permalink. 20 Comments.