There’s a shelf in my friendly local game store that I’ve only recently taken any interest in: the kid stuff. Not because of any stigma, mind you. I’ve always been of the opinion that the un-seriousness of kid games should be taken seriously, if only because they strip away every appendage and appendix, letting you isolate and interact with the gooey chocolate center that is the game’s — for lack of a better word — “fun.” You don’t have to be a child to recognize that Rhino Hero is a masterpiece.

Still, I’m an adult human man, and the kid shelf is literally beneath my level. Eye level. Because I don’t have eyes in my shins. And only recently have I had a companion whose eyes tend to be located shinward. When she saw a game with a wobbly penguin on the cover, I said sure. At the very least, maybe she’d cool it on Blob Lobber.

Right up front, I’ll say that IceCool2 is incredible. Maybe I only think that I think that. Maybe I’m addled with Stockholm Syndrome from yet another session of lobbing blobs. Maybe there’s another version of me, the real me, animated like a watermark in my forehead, screaming and pleading for me to wake up, please wake up, this isn’t you.

But I don’t think so.

You’re a penguin trapped in a palace of ice. You’re also hungry. Fortunately, flicking your penguin through certain doors acquires fish tokens, which permit you to draw fish cards, which are worth one, two, or three fish. Fish are victory points, in case you hadn’t put that together on your own.

Straightforward, right? But that’s where IceCool2 pulls out the rug, because nothing is quite as it seems.

The flicking requires a peculiar degree of skill.

First of all, let’s talk about the flicking. In nearly every flicking game, from Catacombs to SEAL Team Flix, there are certain expectations. Call them commandments of flicking. Thine object of flickery shall be a disc. Thou shalt flick with thine pointer finger. No snapping of thine finger from thine thumb. If thine object of flickery leaves mine board, thou art boned.

IceCool2 doesn’t cotton to these commandments. First of all, its penguins aren’t discs. They’re penguins. With bobble-bottoms that send them spinning and wobbling and sliding all over the place. And while this gives them a certain slipperiness that evokes a sheet of ice, it also lets you do tricks.

What tricks, you ask? All sorts. Unlike a regular disc, with a trajectory measured purely in force and ricochet, these penguins can be made to slide in wide curves, wobble around corners, or even hop into adjoining rooms. When a shot like this happens in another flicking game, it’s a one-in-a-thousand error, the result of our holographic universe’s rules bending in proximity to a Matrix-freed savant or possibly unexpected backspin that you have no hope of recreating. Here it’s just another option. If you want to veer right or left, flick your penguin on that side; if you want to hop, flick its face into the ice. These aren’t easy maneuvers, but they’re shots that can be replicated with enough consistency that they’re worth an attempt.

And attempt them you should, because sometimes trick shots are worth additional fish. While you don’t have any control over the value of the cards you draw, wimpy one-fish cards can be spent for additional moves or bite-sized bonus objectives. These are crucial if you find yourself behind, letting you make a one-time ricochet, two-door shot, or room hop for another fish card. If you happen to pass through one of your scoring doors, all the better.

You can do cool crap like this. I love it.

This single component choice — an unstable bubble butt! — accomplishes a whole lot with a convex surface. In addition to giving everything an adorable jiggle, it transforms the floor into ice, provides a weird degree of control over your shots, and makes cool objectives possible while still demanding skill. The game is about those dome-bums as much as it’s about collecting fish or accidentally bruising your finger because you flicked too hard. And it still isn’t IceCool2’s last twist.

That honor is reserved for the penguin catcher. Apparently there’s an age limit on ice palaces, because every round features one penguin trying to catch the others. Rather than sliding through doors, it’s the catcher’s goal to smack into everyone else to, uh, steal their driver’s licenses. Nabbing a license earns you a fish card, but the real bonus is that the catcher can end the round prematurely by collecting everybody’s ID. Like racing an egg timer that’s actively hunting you, it isn’t enough to clear doorways. You’re also on the run, and making decisions based on range and line-of-sight relative to the catcher. Once people get good, you’re even wary of proximity through walls, because you can’t be certain your pursuer won’t come plummeting from above.

The other benefit is that there’s hardly any room to grow bored. This isn’t a long game to begin with, clocking in at maybe twenty minutes, but every few turns the game changes tempo, forcing you to flee the catcher or pursue your friends. For a kid’s game with only a couple pages of rules, it’s surprising how much variety gets crammed in there. Dexterity plus hiding plus chasing plus slipping on the floor and crying. Childhood encapsulated. 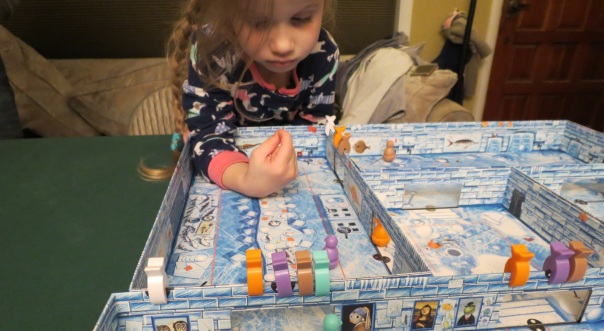 That onesie helps her stay warm in the cold of Antarctica.

The result isn’t my favorite flicking game of all time, but it’s easily the best I’ve played with kids. Heck, it’s one of the best kid games, period. Anything that prompts a five-year-old to howl with laughter is already going to reward my dad-brain with a rush of dopamine. But doing that without making me want to dig my eyes from my skull due to boredom? That’s an accomplishment.

Feel free to put that tagline on the next edition’s box front: “Unlikely to make you dig your eyes out of your skull due to boredom. —Space-Biff!” You earned it, fella. Now to see about acquiring the first IceCool and combining its rooms into a mega-palace.

Posted on March 18, 2019, in Board Game and tagged Board Games, Brain Games, IceCool2. Bookmark the permalink. 6 Comments.